The Battle of Edgecote Moor

After the decisive Yorkist victory at the Battle of Towton in 1461 and the destruction of the Lancastrian cause, England enjoyed a period of relative peace under Yorkist rule. However, the powerful Richard Neville, Earl of Warwick who had played a large part in the accession to the throne of England of his cousin King Edward IV, became dissatisfied as his influence at court steadily waned. 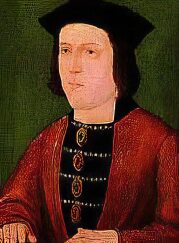 He had been deeply humiliated when Edward had informed Warwick, who at the time was conducting negotiations with Louis XI France for the hand of the Princess Bona of Savoy, that he had already secretly married Elizabeth Woodville, the impoverished widow of Sir John Grey, a Lancastrian knight. 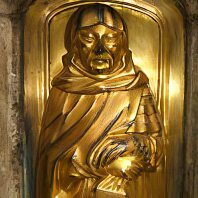 The new queen, who proved to be avaricious and grasping, quickly persuaded her besotted spouse to arrange advantageous marriages amongst the nobility for her large and needy family. Warwick particularly resented the "diabolical marriage" of his sixty-five-year-old aunt, Katherine Neville, Dowager Duchess of Norfolk to John Woodville, the nineteen year old brother of the queen. Deeply offended, the proud and haughty Warwick came to detest Elizabeth Woodville.

Insult was added to injury when Edward refused to allow his younger brother, George, Duke of Clarence, the heir to the throne, to marry Warwick's eldest daughter Isabel Nevile. Clarence also heartily disliked the new Queen. Warwick possessed influence over George who had been brought up in his household. As Warwick became progressively more alienated from King Edward, he and Clarence inspired a revolt in the north of England, under the leadership of Robin of Redesdale, before sailing for Calais in July 1469, as Warwick was captain of Calais, this action raised no suspicion. The situation became further complicated by the outbreak of a separate rebellion at the same time, led by Robert Hilyard who called himself Robin of Holderness, it was aimed at restoring the Percies to their estates. John Neville, Marquis of Montagu crushed Robin of Holderness' revolt in the name of King Edward and Hilyard was killed at York.

While in Calais, George was married to Isabel, in defiance of his brother's wishes on 11 July 1469, the ceremony was conducted by Warwick's brother, George Neville, archbishop of York. When Edward marched north with a hastily mustered force to crush what he believed was a small rebellion, Warwick and Clarence landed in Kent and began to muster an army. They marched on London, where Warwick was highly popular, the city opened its gates to Warwick without resistance.

On discovering that the rebel forces outnumbered him, the king withdrew to Nottingham to wait for reinforcements. William Herbert, Earl of Pembroke and Humphrey Stafford, Earl of Devon was marching to his aid. Warwick and Clarence declared their support for the rebel leader Robin of Redesdale on July 12, declaring that they adhered to the cause of the "king's true subjects," who had "called upon them with piteous lamentations to be the means to our Sovereign Lord the King of remedy and reformation". Redesdale's true identity is not known, but he is thought to have been either Sir John Conyers of Hornby, husband of Fauconberg's daughter Alice, or his brother Sir William Conyers of Marske, or even both. Warwick began advancing north with a large army to aid the rebels. Redesdale began moving south to rendezvous with Warwick, bypassing the king at Nottingham and nearing the approaching Yorkist forces of the earls of Pembroke and Devon.

On July 25, the Yorkists entered Banbury in Oxfordshire and discovered that the enemy was very near. An argument between Pembroke and Devon over billets occurred later in the day, and Devon refusing to march with Pembroke, moved south to Deddington Castle with his forces, which included the army's archers.

The next morning, Pembroke occupied a strong position on high ground at Danes Moor in Northamptonshire, six miles northeast of Banbury. Robin of Redesdale positioned his army near Thorpe Manderville and took the offensive.

Volley after volley of arrows was unleashed at Pembroke's army, who, with no archers amongst them, we're unable to respond in kind. Moving down the slope, the Yorkists clashed with the rebels. In the fierce hand-to-hand fighting which followed, Pembroke's army began to gain the upper hand and Robin of Redesdale may have been slain in the melee.

At 1 o'clock the Pembroke received the welcome news that Devon was advancing speedily to his aid with his force. With victory in sight, the Yorkists were alarmed to spot rebel reinforcements approaching the field wearing Warwick's colours. These were the advance guard of Warwick's forces led by Sir John Clapham. Sighting Warwick's livery the Yorkists believed that Warwick's entire force was about to descend on them, and began to panic and flee. In the ensuing rout, large numbers of Pembroke's troops were cut down.

The Earl of Pembroke was captured the next day and promptly beheaded, as was his brother Sir Richard Herbert. In the aftermath of the battle, King Edward whose followers had dispersed, was taken prisoner at Olney by George Neville, Archbishop of York. Warwick then attempted to rule in the king's name. Edward's father-in-law, Richard Woodville, Earl Rivers and his son John Woodville, were captured at Chepstow. Following a hasty show trial, they were beheaded at Kenilworth on 12 August 1469 . The Earl of Devon was also captured and executed at Bridgwater.