The Battle of Hedgeley Moor

Despite his resounding victory at the Battle of Towton on 29 March 1461, the new Yorkist king, Edward IV still encountered Lancastrian resistance during the early years of his reign. Following setbacks in 1463, in early 1464, the Lancastrians hoped that the Welsh Marches and the West Country would provide them with support.

Plan of the Battle of Hedgeley Moor 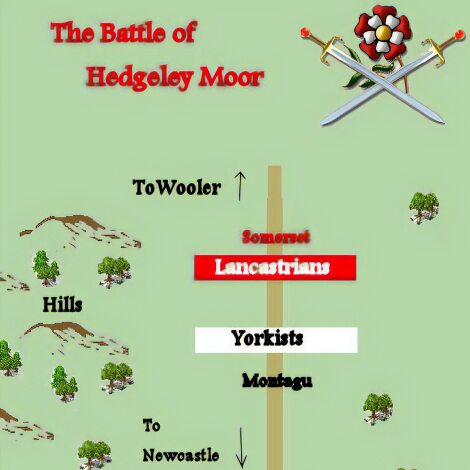 The ever determined Queen Margaret of Anjou, who had retreated to Scotland with her young son after her forces suffered defeat at Towton, where she found refuge at the court of King James III, a staunch supporter of the Lancastrian cause. Margaret gathered her forces and launched an invasion of England in the early part of 1464. The Lancastrian queen captured several northern castles, and was joined by Somerset and the Percy family.

The newly established Yorkist regime was attempting to remove the threat of a Scottish invasion, by reaching an agreement with the Scottish king. Parliament was due to meet at the city of York on 5 May to discuss terms with a delegation from Scotland, however Lancastrian activity in Northumberland and North Yorkshire rendered difficulties in the Scottish ambassadors travelling in safety to York.

Henry Beaufort Duke of Somerset had spent some time in exile after Towton but had returned with a French mercenary force in October 1462. When the queen retreated to Scotland, Somerset remained in England to defend Bamburgh, and in December of that year surrendered the castle to Edward IV. Having made his peace with Edward IV, in 1462 he was pardoned and his estates restored to him, but at the end of the following year had revealed his true loyalties and defected again in 1464 to the deposed King Henry VI and Queen Margaret.

Somerset made for the north-east where die-hard Lancastrians held the Northumbrian castles of Alnwick and Dunstanburgh. He was joined there by a number of other pardoned Lancastrian nobles, including Sir Henry Bellingham, Sir Humphrey Neville and Sir Ralph Percy, the grandson of the renowned Sir Harry Hotspur. Percy had surrendered Bamburgh Castle, of which he was governor, to Edward IV, on Christmas Eve 1462 in return for a free pardon from the king.

John Neville, 1st Marquess of Montagu, the younger brother of Richard Neville, Earl of Warwick was dispatched north by the new Yorkist King Edward IV with a small force of troops to conduct the Scots safely to York. Henry Beaufort, 3rd Duke of Somerset set an ambush for Montagu near Newcastle which, forewarned by his scouts or spies, he successfully evaded and continued his journey northwards to Newcastle mustering further troops along the route. From there he moved north to Alnwick, then north-west towards Wooler.

Arriving at Hedgeley Moor, to the north of the village of Glanton and seven miles to the south-east of Wooler in Northumberland, with a force of around five or six thousand men, Montagu encountered Somerset's army of about five thousand, which occupied the high ground in front of him and barred his passage to the north.

The series of events of the battle are fairly unclear. Battle probably commenced with the usual exchange of arrows between the two sides. Montagu then advanced across the 1,500 yards of moorland but was forced to halt and readjust his lines when the Lancastrian left flank, under the command of Lords Roos and Hungerford faltered without even striking a blow, broke and fled. 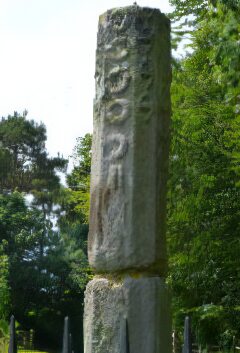 This was followed by the whole Lancastrian force breaking as the Yorkists clashed with them, all but a few of the remaining Lancastrians fled the field in panic. Somerset succeeded in rallying many of the Lancastrians and retreated in reasonably good order into Tynedale.

Sir Ralph Percy, who led the Lancastrian vanguard, alone remained with his retainers and made a last stand. Local legend states that Percy's horse leapt some thirty feet during the charge in which he was brought down. Stones were later erected to mark the spot and are still visible in the small enclosure at the site known as 'Percy's Leap'.

Deserted by the rest of the army, including all the other commanders, he was soon cut down. As he died he is said to have uttered the enigmatic words: 'I have saved the bird in my bosom'. A square stone column, known as 'Percy's Cross' stands near the site of the battle.

The defeat of the Lancastrians ensured the safe arrival of the Scottish envoys to York, where a peaceful solution was successfully negotiated. Despite their ignominious defeat at Hedgeley Moor the Lancastrian cause stubbornly refused to admit defeat. What remained of the Lancastrian army regrouped at Alnwick. Montagu, having successfully carried out his mission, returned to Newcastle. Somerset and Montagu faced each other in battle but a month later outside Hexham on 14 May 1464. Montagu's further victory there effectively ended the Lancastrian uprising in Northumberland.

In reward for his services, in 1464 John Neville, Lord Montagu has created Earl of Northumberland, a title which had long been held by the disgraced Percy family, and awarded the Percy estates confiscated after the Battle of Towton. When Henry Percy was rehabilitated in 1470, Montagu was forced to surrender his earldom to his former enemy along with other important offices. In compensation, he has created Marquess of Montagu, but without the estates or income to support such dignity. Now implacably opposed to Edward IV, he switched his allegiance to the Lancastrian side and allied with his brother Richard, Earl of Warwick, in the brief redemption of King Henry VI. Although he returned to high office in the north, Montagu was killed with his brother Warwick while fighting the Lancastrians at the Battle of Barnet in 1471.