The Battle of Hexham

Finding their northern base of operations was threatened, the Lancastrians mounted a rebellion in the North of England, aimed at disrupting the peace negotiations between Edward IV and the Scots, which were to have taken place at Newcastle in March and to gather Lancastrian support before King Edward IV could muster in Leicester and move north with an army to crush the rebellion.

A Lancastrian force under the command of Henry Beaufort, Duke of Somerset moved through Northumberland in late April 1464, mustering about 5000 men from Lancastrian garrisons.

A Yorkist force under John Neville, brother of Warwick the Kingmaker, was dispatched north to escort the Scottish envoys to York in the vanguard of Edward's larger force. The Lancastrians attempted to intercept Neville, but were defeated at the Battle of Hedgeley Moor on 25 April 1464. What remained of the Lancastrian army regrouped at Alnwick, Montagu, on having successfully carried out his mission, returned to Newcastle.

The Duke of Somerset advanced into the Tyne valley, John Neville decided to take the offensive and led his army out of Newcastle travelling hastily quickly along the south bank of the River Tyne to meet him. The two opposing armies faced each other outside Hexham on 14 May 1464.

The Lancastrian army was encamped near Linnels Bridge over Devil's Water, a fast flowing stream set in a deep cutting, justto thesouth of Hexham. Marching overnight, the Yorkists crossed onto the south bank of the Tyne on the night of 12th/13 May and the folllowing morning they were in a position to attack Hexham.

Despite warnings from his scouts, Somerset had little time to prepare his troops for battle.

He quickly moved his force to a site near Linnels Bridge and deployed his troops in three detachments in a field near the Devil's Water, with their backs to the river, in an attempt to engage the Yorkists before they moved past him into Hexham.

Plan of the Battle of Hexham 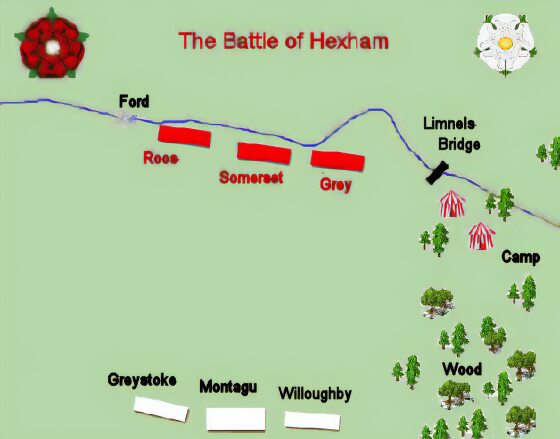 The battle was brief but bloody, the Lancastrians had just taken up their positions when the Yorkist army charged them from higher ground. The right division of the Lancastrian army, led by Lord Roos, lost its nerve and fled across the Devil's Water into Hexham.

The remnants of Somerset's force were hemmed in and unable to manoeuvre; the Yorkist troops charged through the opening at the east end of Linnel's Meadow and engaged the Lancastrian soldiers.

Lancastrian morale quickly collapsed, and what remained of the Lancastrian army was pushed into the Devil's Water by the Yorkist infantry. A complete route followed, men either drowned in the river or were crushed as they tried to climb the steep banks of the Devil's Water in the retreat towards Hexham. Most, however, were trapped in West Dipton Wood on the north bank of the river and were forced to surrender.

Somerset himself, with a few loyal supporters, attempted to fight his way out of the carnage, unhorsed and badly wounded, he took shelter in a cottage but was discovered and taken to Hexham where he was imprisoned in Hexham Gaol. Reports conflict as to whether King Henry VI was camped with the Lancastrian troops or nearby, and whether he fled the area before or during the battle, but he did manage to escape and avoided capture.

John Neville had thirty of the leading Lancastrians executed in Hexham on the evening following the battle, including the Duke of Somerset and Lord Roos. Sir William Tailboys was found hiding in a coal pit and executed shortly after as he tried to flee north with £2000 of Henry's war chest. The Lancastrian resistance in the North of England collapsed. The capture of King Henry VI near Clitheroe in Lancashire marked the end of the rebellion. In reward for his services, Montagu was created Earl of Northumberland by King Edward IV.

The capture of Henry VI at Waddington Hall in Lancashire