James Scott, otherwise known as James Croft, was the illegitimate son of King Charles II, he was born on 9 April 1649 in Rotterdam in the Netherlands, where his 18-year-old father was living in exile following the execution of Charles I. His mother was Charles' mistress Lucy Walter, otherwise known as Mrs Barlow

Lucy Walter, described as "brown, beautiful, and bold" was of Welsh extraction, the daughter of Richard or William Walter, of Roch Castle and Haverfordwest and his wife Elizabeth Protheroe. James, or 'Jemmy', as he was known, inherited the dark good looks of his mother, when Lucy's relationship with Charles ended, she indulged in a series of relationships with other men, the young James and a daughter, Mary, fathered by another lover, experienced a casual upbringing, and was often "so poor that his shoes needed repairing." 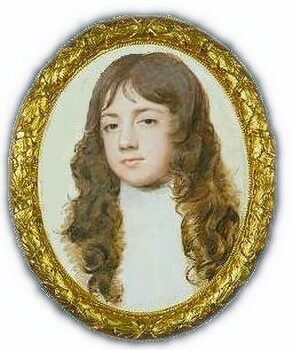 Aware that Charles wished to remove her son from her care, Lucy fled to England, where she and her son were imprisoned in the Tower of London by Cromwell and questioned. James and his mother were later released and sent to Flanders. In March 1658 the young James was kidnapped by Edward Progers, Charles'confidential page of the back stairs and sent to Paris where he was placed in the care of the Crofts baronets, whose surname he adopted. He later went to live with his grandmother, Henrietta Maria of France, James was to become close to her and his aunt, the youngest child of Charles I, Henrietta Anne Stuart, known as 'Minette'. 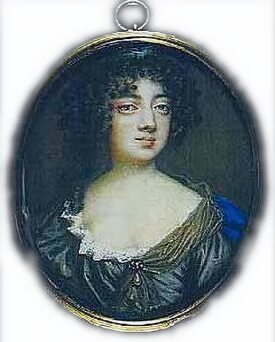 Henrietta Maria was a devout Catholic and placed James under the instruction of Father Geoff of the Oratorian College of Notre Dame des Vertus, but later a Thomas Ross, a Scottish protestant, became his tutor. He was later educated at Petit Ecoles, in Le Chesney near Paris. His education was patchy, which he grew to regret when he was older.

Rumour stated that Charles had secretly married Lucy. Monmouth, later himself always claimed his parents were married, and that he possessed their marriage lines, but failed to ever produce them. To scotch these rumours, Charles II announced, in his lifetime, that he had never been married to anyone other than his Queen, Catherine of Braganza.

Doubts have been cast on the paternity of the Duke of Monmouth. According to Hugh Noel Williams, Charles had not arrived at The Hague until the middle of September 1648, which was but seven months before James' birth, although he met Lucy for the first time nine months before. Rumour stated that James' mother had been the mistress of Colonel Robert Sidney, a younger son of the Earl of Leicester, in the summer of 1648.

As an adult, contemporaries claimed that Monmouth bore a much stronger resemblance to Sidney than the Bourbon looking Charles. These rumours probably originated from James, Duke of York, Charles II's brother, who was feared his nephew's claims to the throne. In 2012, a DNA test was conducted on Monmouth's direct descendant in the male line, the Duke of Buccleuch, revealed that he shared the same Y-chromosome (inherited from father-to-son) as a distant Stewart cousin, a descendant of Charles Stewart of Ardshiel, providing strong evidence that Monmouth was the son of Charles II

In the Reign of Charles II

After the Restoration of his father to the English throne, James was brought to London by Henrietta Maria, described by the diarist Samuel Pepys as "Mr. Crofts, the King's bastard, a most pretty spark of about fifteen years old". Charles II had made much of his eldest son, on 14 February 1663, at the age of 14, he was created Duke of Monmouth with the subsidiary titles of Earl of Doncaster and Baron Scott of Tynedale. He was married to the wealthy heiress Anne Scott, 4th Countess of Buccleuch on 20 April 1663 and took his wife's surname. The day after his marriage, they were made Duke and Duchess of Buccleuch, Earl and Countess of Dalkeith and Lord and Lady Scott of Whitchester and Eskdale.

Charles II's Portuguese queen, Catherine of Braganza, failed to produce a legitimate heir. James' Protestantantism made him a popular figure in England, as opposed to the heir to the throne, James, Duke of York, who had openly converted to Catholicism.

In 1665, at the age of 16, Monmouth served in the English fleet under his uncle the Duke of York in the Second Anglo-Dutch War. In 1678 he was made commander of the Anglo-Dutch brigade, now fighting for the United Provinces against the French and he distinguished himself at the Battle of St Denis in August 1678 during the Franco-Dutch War, further increasing his reputation. The following year, after his return to Britain, he commanded the small army raised to put down the rebellion of the Scottish Covenanters and despite being heavily outnumbered, he decisively defeated the Covenanter rebels at the Battle of Bothwell Bridge on 22 June 1679. Monmouth separated from his wife, Anne Scott, whom, at his death, he claimed "never to have much cared for" and lived openly with his mistress, Henrietta Wentworth, who John Evelyn was to refer to as 'that debauched woman'. 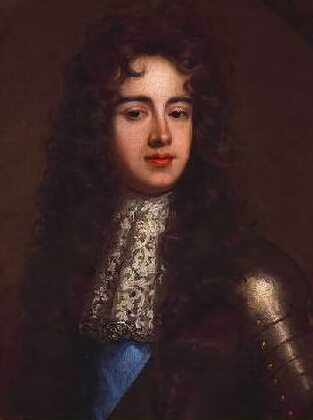 Monmouth barely escaped trial for his involvement in several plots, including the Rye House Plot, a conspiracy in 1683 which aimed at the assassination of Charles II and the Duke of York on their way to Newmarket to secure the succession of Monmouth to the throne, when the plot was discovered Monmouth swore he did not agree to it, but Charles, with good cause, no longer trusted his son. Spared by the king during trials of his colleagues, Monmouth moved to the Continent, where Henrietta Wentworth joined him, he was never to see his father again.

After King Charles II's death and within five months of the accession of James II, in February 1685, Monmouth returned to England to gather an army, landing with three ships at Lyme Regis in Dorset in early June 1685, he declared himself "now head and captain-general of the protestant forces of this kingdom" with a "legitimate and legal" right to the crown, which he promised he would exercise only with the agreement of a free parliament. Although he was a popular figure and referred to as "King Monmouth" by many of the commoners, the widespread uprising he had expected failed to occur.

On 6 July 1685, the two armies met at the Battle of Sedgemoor, the last clear-cut pitched battle on open ground between two military forces fought on English soil. Monmouth's makeshift force could not compete with the regular army and was soundly defeated. Monmouth himself was captured hiding in a ditch disguised as a shepherd and arrested at Ringwood in Hampshire.

Parliament passed the Act of Attainder. Monmouth wrote pleadingly to Charles II's queen, the kind-hearted Catherine of Braganza and she generously tried to intercede with her brother-in-law for her stepson's life, but James was adamant and refused to be swayed. He was executed by Jack Ketch on 15 July 1685, on Tower Hill. Shortly beforehand, Bishops Turner of Ely and Ken of Bath and Wells visited the condemned man to prepare him for eternity but withheld the eucharist as he refused to acknowledge either his rebellion or his relationship with Lady Wentworth had been sinful.

Monmouth's execution was hideously bungled. As he mounted the scaffold at Tower Hill, he handed a gold toothpick-case to one of the witnesses, asking him to give it back to Lady Henrietta, he tipped the headsman with the words, "Here are six guineas for you and do not hack me as you did my Lord Russell. I have heard you struck him four or five times; If you strike me twice, I cannot promise you not to stir." Unfortunately, the executioner took five strokes at his neck and even then the head was not completely severed and had to be finished off with a knife:-

"The hangman addressed himself to his office. But he had been disconcerted by what the Duke had said. The first blow inflicted only a slight wound. The Duke struggled, rose from the block, and looked reproachfully at the executioner. His head sank once more. The stroke was repeated again and again, but still, the neck was not severed, and the body continued to move. Yells of rage and horror rose from the crowd. Ketch flung down the axe with a curse. 'I cannot do it,' he said; 'my heart fails me.' 'Take up the axe, man,' cried the sheriff. 'Fling him over the rails,' roared the mob. At length, the axe was taken up. Two more blows extinguished the last remains of life, but a knife was used to separate the head from the shoulders. The crowd was wrought up to such an ecstasy of rage that the executioner was in danger of being torn in pieces, and was conveyed away under a strong guard.

Monmouth was interred, along with many other victims of execution, in the Chapel of St. Peter ad Vincula in the Tower of London.

His dukedom of Monmouth was forfeited, but the subsidiary titles of the dukedom (Earl of Doncaster and Baron Scott of Tindale) was restored to his grandson, Francis Scott, 2nd Duke of Buccleuch (1695-1751), on 23 March 1743.