The future James II was born at midnight on 14 October 1633 at St. James' Palace, London. The second surviving son of King Charles I and Henrietta Maria of France. As the monarch's second son, he was created Duke of York on 22 January 1644, in accordance with established tradition. 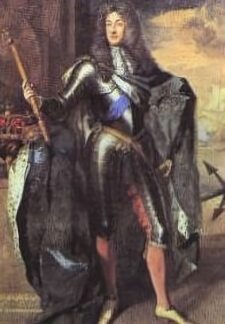 James had fought in the Civil War along with his brother Charles in support of the Royalist cause and had at one point escaped from the clutches of parliament by resorting to dressing as a woman. He shared his brother's long years of exile after their father's execution.

The Duke of Buckingham coined a phrase that summed up the inherent differences in the two brothers, Charles he said, "could see things if he would" while James on the other hand, "would see things if he could". Like his brother, James had a reputation as a womanizer, but Charles thought little of his brother's tastes and once joked that he believed James had his mistresses given to him by his priests for a penance.

A tall man like his elder brother, Charles II, James was described as being 'two yards high', though much fairer complexioned and less foreign looking, he had the lighter colouring of his Danish grandmother. Obstinate and inflexible, James II was not a man to compromise, he completely lacked his brothers endearing sense of humour. Charles II, who knew him well, predicted that after his own demise his brother would soon "go on his travels again" and such proved to be the case. 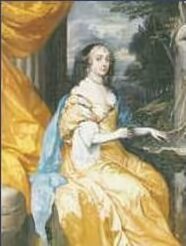 James first wife, Anne Hyde, was the daughter of Charles II's advisor, Edward Hyde, Earl of Clarendon and a Lady-in-Waiting to his sister, Mary, Princess of Orange. The Duke of York was forced into marriage after Anne was found to be pregnant with his child. He attempted to extricate himself by casting doubts on Anne's chastity but Charles II prevailed on him to enter into the marriage, much to the chagrin of his mother, Henrietta Maria, who felt her son had married far beneath him.

Despite such an inauspicious start, it proved to be a happy marriage, although James continued to stray, Anne turned a blind eye to his affairs. She later converted to Catholicism and encouraged her husband to do the same, it was not a popular move. Anne Hyde bore her husband many children, but of these only two daughters survived, Mary and Anne. Charles II insisted that the couple's children, as heirs to the throne, should be brought up in the Anglican faith. James eldest daughter, Mary, was married to her Protestant Dutch cousin, William of Orange.

James professed Catholicism became the subject of mounting unrest amongst his future subjects, in 1673 Parliament passed the Test Act which prohibited Catholics from holding public office which forced James to surrender his appointment as Lord High Admiral. The hysteria engendered by Titus Oates by his allegations surrounding the Popish Plot led in 1679 to the Exclusion Crisis when vigorous attempts were made to exclude James from the succession to the throne. Charles II resisted all attempts to have his brother disinherited and eventually his wishes for the legitimate succession of his brother were respected.

Mary of Modena, second wife of James II and VII 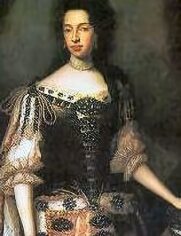 After the death of his first wife, James remarried the beautiful young Italian Catholic, Mary Beatrice of Modena, in the hope of producing a male heir to the Stuart throne. Mary Beatrice was the daughter of Alfonso IV d'Este, Duke of Modena and Laura Martinozzi, the niece of Cardinal Mazarin, and described by contemporaries as "tall and admirably shaped". The marriage was perceived as a threat by the Protestant element, James's new wife was known to be a bigoted Catholic and was even rumoured to be the daughter of the Pope.

On the death of his brother Charles II in 1685, King James II and VII ascended the throne at fifty-one years old. Opposition to his rule was widespread, and was lead in the early stages by his main rival, Charles II's unruly and unprincipled illegitimate son, James, Duke of Monmouth. Monmouth claimed that his father had undergone a marriage ceremony with his mother, Lucy Walter, which Charles, in his lifetime, had denied. 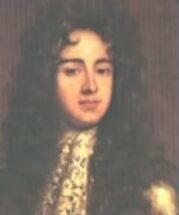 Monmouth landed in the West Country, but the majority of the gentry did not rise in his support as he had expected they would. James II set out with an army to meet the rebels and as Monmouth advanced toward Bristol the royal army began to close in, at which he lost his nerve and ordered a retreat to Bridgewater.

Monmouth attempted to attack the enemy under cover of darkness, while they were encamped on Sedgemoor. His army were halted over night at a wide ditch which ran across Sedgemoor and first light revealed them to the royalists. Slaughter ensued, Monmouth deserted his followers and fled. He was later captured in the New Forest, hiding in a ditch. He begged his uncle the King for mercy.

King adamantly refused to receive him and cast aspersions on Monmouth's mother, Lucy Walter, known to have been a promiscuous woman, raising doubts that his brother was ever Monmouth's father, commenting that Lucy died of "a disease incident to her profession", labelling her as little more than a common whore.

Monmouth wrote in desperation to his stepmother, Catherine of Braganza, soliciting her aid. She generously attempted to intercede for his life, but James refused to be swayed. On 15th July Monmouth went to the block. His execution was bungled by the headman, Jack Ketch, who took five chops to sever his handsome but unruly head. He had to finish off with a knife to completely sever it. He was buried in the Chapel of St. Peter ad Vincula, within the Tower of London.

Mary of Modena with her son, James Francis Edward Stuart 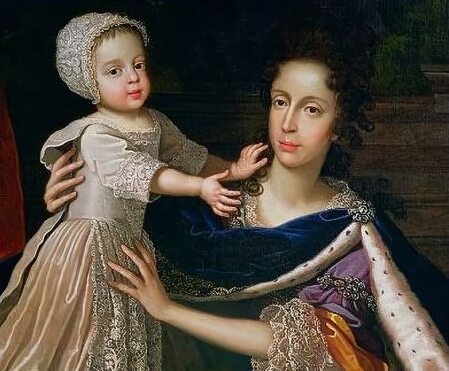 James proceeded to appoint Catholics to positions of power. He was met with staunch opposition when he arrogantly called Parliament to ask for funds to strengthen the army. Opposition to his wishes always infuriated him and he characteristically prorogued Parliament. Heedlessly, he appointed more Catholics to commissions in the army. The army was then posted on Hounslow Heath, a constant and threatening reminder to London and to Parliament of James' strength.

He seemed oblivious to the fact that his acceptance was based on the fact that most of his Protestant subjects resigned themselves that James was an ageing man and his daughter and heiress, Mary, was a staunch Protestant who would reverse the changes introduced by her father. When Queen Mary of Modena announced she was pregnant most Protestant Englishmen prayed fervently that it would be a daughter, who would not replace Princess Mary in the succession.

On 27th April 1688, the King issued an order to the Anglican clergy that his 'Declaration of Indulgence' was to be read aloud from the pulpit of every church in the country for a period of four successive Sundays. Seven Anglican Bishops presented him with a petition, explaining their reasons for disobeying the royal edict. The incensed James, throwing caution to the wind, had them arrested on a charge of seditious libel and sent to the Tower, by which he succeeded in outraging public opinion against himself.

On 10th June 1688 Mary of Modena was delivered of a son, christened James Francis Edward, James II now had an heir, who would be brought up a Catholic and who would continue his policies. The thoroughly disenchanted Protestants were now not prepared to tolerate their Catholic monarch any longer.

William of Orange, James's nephew and the husband of his daughter Mary, now displaced by her brother in the succession, was in correspondence with many of the disaffected Protestants in England. They urged him to lead an army into the country to redress their grievances. William landed at Torbay in Devon on 5th November. Plymouth surrendered to William, which heralded further uprisings against James in Cheshire and the north.

Treachery in the royal ranks was rife and many hastened to desert James' cause, including John Churchill, appointed second-in-command of the King's army. James' younger daughter Anne had also left him, accompanied by Sarah Churchill and escorted by the Bishop of London. This was a great emotional blow to the King who had been a fond and indulgent father to both of his daughters.

Having already sent his Queen and the new Prince of Wales to safety in France, James resolved to flee to join them although advised that leaving the country would be construed as abdication. William was more than happy for him to do so as it rid him of the embarrassing problem of what to do with his deposed father-in-law. James reached France on Christmas Day 1688, where he was welcomed by his first cousin, King Louis XIV, at Versailles. William and Mary were invited to accept the throne vacated by her father. 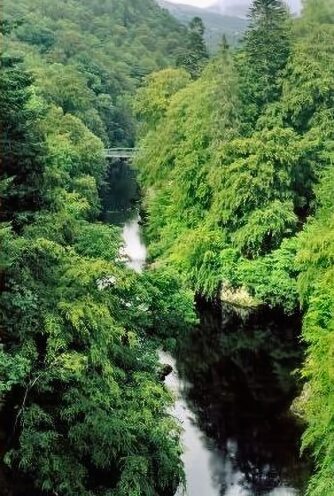 Presbyterian Scotland also supported William. John Graham of Claverhouse, known to history as Bonnie Dundee, received a commission from the exiled King James to raise the Catholic Highlanders, they descended on the government forces at the Killiecrankie Pass. Dundee won a victory for James but died a few days later of wounds sustained in the battle.

The Years of Exile

England's new monarch, William III, declared war on his detested lifelong enemy, the Catholic Louis XIV of France. Louis saw that it was to the benefit of France to keep the English and Dutch forces preoccupied with the Jacobites, as James' supporters came to be known.

The Chateau of St. Germain-en Laye 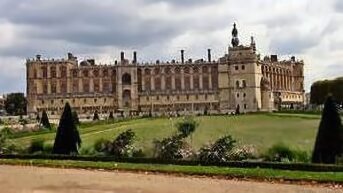 The French King provided James with a pension and the use of the Chateau of St. Germain-en Laye. James deteriorated rapidly, both mentally and physically after his flight from England and was now only a pale shadow of his former self, he looked weary and aged. Louis was prepared to offer James enough support to ensure that William was kept busy on a second front.

James II set sail for Ireland where his supporter, Tyrconnel, had already built up an army of Irish. He progressed from Cork to Dublin and met with some initial success. William landed at Carrickfergus in June 1690 and met his uncle's army at the Boyne. William was wounded in the early stages of the battle but soon put the Irish troops to flight. James himself was forced into an ignominious flight back to France.

Two years after the Boyne, Louis again committed French support to James cause. The intended invasion fleet, while waiting for favourable winds to sail, was attacked in harbour by the English and most of the ships and supplies went up in flames. Dogged by ill-luck, this further defeat at La Hague was the end of James' hopes to recover the thrones of England and Scotland.

Mary of Modena was delivered of a second child in exile in 1692, a daughter, Louisa Maria Stuart, whom James called his solace. The depressed James was now totally obsessed with religion and spent most of his time at his devotions or visiting the convent of La Trappe.

August 1701, aged sixty-eight, James collapsed whilst hearing mass. His small court crowded around to wait for the end. Three weeks later it came. James died of a brain haemorrhage. He was buried in France at St.Germaine. Louis XIV officially recognised James' son as King James III of England and VIII of Scotland after his death.