The handsome, dashing but unprincipled Monmouth claimed that his father had actually married his mother, Lucy Walter, despite the fact that his father had previously announced that he had married only once to Catherine of Braganza, now the dowager Queen. At the time of Charles II's death, Monmouth was in voluntary exile at The Hague, in the Netherlands after his part in the the Rye House Plot to assasinate his father and the Duke of York. 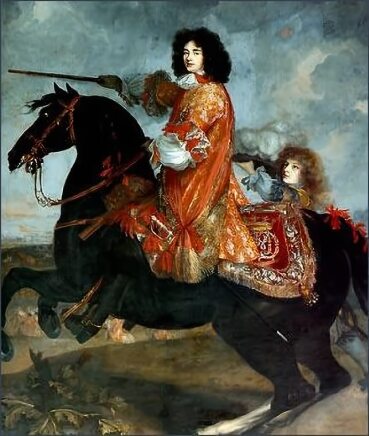 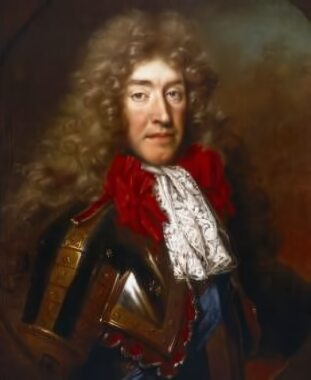 The handsome, dashing but unprincipled Monmouth claimed that his father had married his mother, Lucy Walter, despite his father had previously announced that he had married only once to Catherine of Braganza, now the Dowager Queen. At the time of Charles II's death, Monmouth was in voluntary exile at The Hague, in the Netherlands after his part in the Rye House Plot to assassinate his father and the Duke of York.

Monmouth had toured the South West of England in 1680, unlike his reserved uncle James II, the handsome Monmouth cut a popular figure and was enthusiastically received. The Duke planned his ill-fated uprising in Holland, it was to coincide with another rebellion in Scotland which was to be led by the exiled Archibald Campbell, Earl of Argyll. Monmouth's rebellion had been long-planned but was ill-prepared.

The Duke set sail for England in May 1685 with a small force of his supporters and landed at Lyme Regis in Dorset on 11 June. A lengthy statement that had been prepared by Robert Ferguson, a fanatical Scottish Presbyterian Minister, denounced the Catholic King James II claiming he had even poisoned his brother Charles II. Monmouth, richly dressed in royal purple and red and wearing a silver star, declared, "For Religion and Liberty" to the assembled crowd. Gregory Alford, Mayor of Lyme Regis, informed the local militias, locally trained volunteers, while Samuel Damsell rode quickly to London to warn the king. Monmouth declared himself "now head and captain-general of the protestant forces of this kingdom" with a "legitimate and legal" right to the crown, which he promised he would exercise only with the agreement of a free parliament. He was a popular figure and referred to as "King Monmouth" by many of the commoners.

John Churchill, later to be created Duke of Marlborough by James' daughter Anne, was appointed as commander of the regular foot in the Royal army, while overall command of the king's forces was given to Louis de Duras, Earl of Feversham. Over the proceeding few days Monmouth continued to recruit men, his appeal to Protestantism was effective among the rural population of Somerset and Devon and by 15 June he had amassed a force which was in excess of 1,000 ill-trained but enthusiastic troops. His supporters, Thomas Hayward Dare and Andrew Fletcher, however, fell into a disagreement about a horse, which led to Dare shooting Fletcher, Dare was promptly placed under arrest. 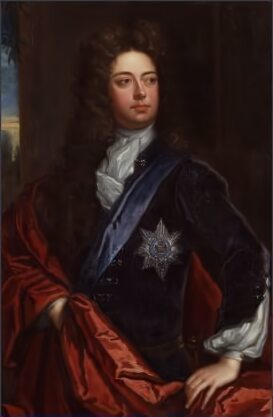 Monmouth, on receiving news of the approach of royalist reinforcements left Lyme Regis, heading north towards Somerset. Just a few days later, his uncle James II's ships sailed into Lyme Regis, occupying the town, they thereby removed Monmouth's only hope of escape should the rebellion not succeed. Monmouth took Axminster on 15 June where he recruited further men, his untrained and poorly equipped force had now swelled to around 6,000, among them was the writer Daniel Defoe but the expected support of the Whig magnates failed to materialise. When he entered Taunton he was enthusiastically received by the townsfolk, the houses were decorated with flowers in welcome, his supporters wore green boughs in their hats, the symbol of Monmouth’s cause. Although the Corporation and the more important people of the Taunton were unwilling to support him, the poor flocked to his banner, and on June 20th he was proclaimed King at the Market Cross at Taunton. Alarmed by his progress, King James had offered a reward of £5,000 for the Duke of Monmouth, dead or alive.

Churchill continued to close in on 'King Monmouth', arriving in Chard on 19 June. Feversham in the meantime moved with his forces into the city of Bristol. Monmouth then continued north, entered Bridgewater to a rapturous welcome and took up residence at Bridgwater Castle on 21 June, he proceeded to Glastonbury, arriving on 22 June and Shepton Mallet on 23 June. The good weather the rebels had previously experienced turned to heavy rain, greatly encumbering them as they marched and badly influenced the army's morale. Monmouth's ragtag army spent the night of 24 June at Pensford where the Royalist cavalry under the command of Colonel Oglethorpe launched an attack on the rebels resulting in a skirmish to take control of Keynsham an important crossing point over the River Avon.

Monmouth planned to attack Bristol but learned the city had been occupied by Henry Somerset, the 1st Duke of Beaufort. He, therefore, proceeded towards Bath, which refused the rebels' entry. The city being strongly defended by Royalist forces, he instead set up camp at Philips Norton and was there attacked by Feversham's forces. Monmouth's half-brother, Henry FitzRoy, Duke of Grafton (son of Charles II and Barbara Palmer) led a force into Philips Norton but was surrounded by the rebels and had to hack through hedges to escape. Churchill came to their rescue after which they withdrew.

Monmouth's force marched through the night to Frome where they arrived on 28 June. The morale of Monmouth's forces received a heavy blow as news of the failure of the rebellion in Scotland arrived and many began to desert. Argyle had landed in Scotland where he was joined by Sir Duncan Campbell and attempted to raise a rebellion that was easily put down by the government. Argyle had been taken prisoner and was executed at Edinburgh on On 30 June. Deciding to head for Warminster Monmouth travelled as far as Trowbridge before being cut off by royalist forces. He then marched his army back towards Somerset through Shepton Mallet, arriving in Wells on 1 July. Feversham planned to contain Monmouth's forces in the South-West until the remainder of his forces arrived but was ordered to engage the enemy. Monmouth was pushed back via Shepton Mallet to the Somerset Levels. He arrived back at Bridgwater on 3 July, where he received a lukewarm welcome. 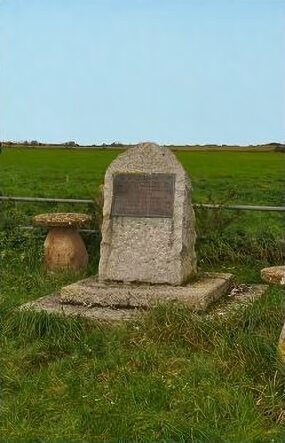 The fateful Battle of Sedgemoor was fought on 6 July, the last pitched battle on open ground between two military forces fought on English soil. Feversham camped on the edge of Sedgemoor at the village of Westonzoyland. Monmouth watched the royal army from the tower of the Church of St Mary at Bridgewater before deciding against holding a Council of War, to attack them. He led his forces out of Bridgwater at about 10:00 pm that night, planning an unsuspected attack on the royal army in darkness. The rebels were guided quietly out of the town by Richard Godfrey, a local man.

As the first of the rebels attempted to cross a drainage ditch, the Bussex Rhyne, which was about eight feet wide, they were heard by a royalist patrol, who prematurely gave the alert, the element of surprise had now been lost. The Royalist army quickly and orderly formed battle lines and Lord Grey of Warke advanced with Monmouth's cavalry. The rebels were outflanked and hundreds of them were cut down, many were caught and killed in what is now known as Moor Drove Rhyne. Fatalities in Monmouth's army have been estimated as between 727 and 2,700, while royalist losses resulted in but 27. Monmouth himself fled the field accompanied by Lord Grey, he intended to reach the coast at Poole in Dorset, and from there escape to the safety of the continent. On arrival at an Inn at Woodyates they parted company, abandoning his horse, Monmouth continued across the country alone, but was captured, after two days of hiding in the countryside, dressed in a shepherd's clothes, dirty, dishevelled and hungry, he had been hiding in a ditch at Horton in Dorset. Monmouth's rebellion was over, it had lasted just six weeks.

Parliament passed an Act of Attainder against Monmouth, who wrote pleadingly to Charles II's queen, the kind-hearted Catherine of Braganza and generously tried to intercede with her brother-in-law for her stepson's life, but James was adamant and refused to be swayed. He was executed by Jack Ketch on 15 July 1685, on Tower Hill. Shortly beforehand, Bishops Turner of Ely and Ken of Bath and Wells visited the condemned man to prepare him for eternity but withheld the eucharist as he refused to acknowledge that either his rebellion or his relationship with Lady Wentworth had been sinful.

Monmouth's execution was hideously bungled. As he mounted the scaffold at Tower Hill, he handed a gold toothpick-case to one of the witnesses, asking him to give it back to Lady Henrietta, he tipped the headsman with the words, "Here are six guineas for you and do not hack me as you did my Lord Russell. I have heard you struck him four or five times; If you strike me twice, I cannot promise you not to stir." Unfortunately, the executioner took five strokes at his neck and even then the head was not completely severed and had to be finished off with a knife:- "The hangman addressed himself to his office. But he had been disconcerted by what the Duke had said. The first blow inflicted only a slight wound. The Duke struggled, rose from the block, and looked reproachfully at the executioner. The head sank once more. The stroke was repeated again and again, but still, the neck was not severed, and the body continued to move. Yells of rage and horror rose from the crowd. Ketch flung down the axe with a curse. 'I cannot do it,' he said; 'my heart fails me.' 'Take up the axe, man,' cried the sheriff. 'Fling him over the rails,' roared the mob. At length, the axe was taken up. Two more blows extinguished the last remains of life, but a knife was used to separate the head from the shoulders. The crowd was wrought up to such an ecstasy of rage that the executioner was in danger of being torn in pieces, and was conveyed away under a strong guard.

Monmouth was interred, along with many other victims of execution, in the Chapel of St. Peter ad Vincula in the Tower of London. His dukedom of Monmouth was forfeited, but the subsidiary titles of the dukedom (Earl of Doncaster and Baron Scott of Tindale) were restored to his grandson, Francis Scott, 2nd Duke of Buccleuch (1695-1751), on 23 March 1743. The subsequent Bloody Assizes of Judge Jeffreys were a series of trials of Monmouth's supporters in which 320 people were condemned to death and around 800 sentenced to be transported to the West Indies.