Catherine of Braganza was born on 25 November 1638, at the Ducal Palace of Vila Viçosa, in Alentejo, Portugal, she was the daughter of John 'The Fortunate', Duke of Braganza and his wife, Luisa de Guzmán, herself the daughter of the Spanish aristocrat Juan Manuel Pérez de Guzmán, 8th Duke of Medina Sidonia, and Juana Lorenza Gomez de Sandoval y la Cerda. She was baptised ducal chapel with the names Catarina Henriqueta. 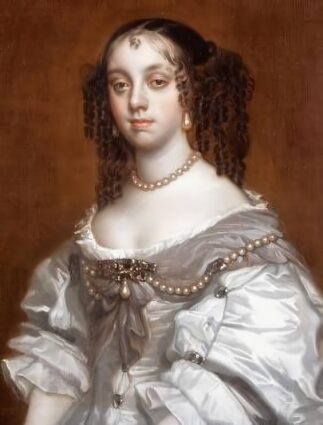 When Catherine was two years old her father led a rebellion against Spain. During the rebellion he was offered the crown of Portugal he accepted and succeeded to the throne of Portugal as King John IV. Her mother Queen Luisa was devoted mother to her children and took an active interest in their upbringing and personally supervised her daughter's education. Catherine is thought to have spent most of her youth in a convent close by the royal palace and had a very sheltered upbringing. King John died in 1656 leaving his wife as regent for the young King Afonso.

Negotiations for Catherine's marriage to King Charles II began during the reign of Charles I and were renewed, in spite of Spanish opposition, following the Restoration in 1660. The marriage contract of Charles and Catherine was signed on 23 June 1661, England obtained Tangier in North Africa and the Seven islands of Bombay (in India), with trading privileges in Brazil and the East Indies, religious and commercial freedom in Portugal and two million Portuguese crowns (about £300,000), while in return Portugal obtained military and naval support against Spain and liberty of worship for Catherine. The couple were married by proxy in Lisbon, on 23rd April 1662. 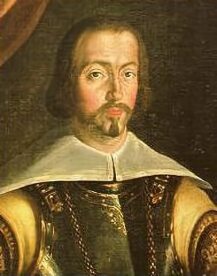 The twenty-three-year-old Catherine was duly sent to England and after a difficult voyage arrived at Portsmouth on 13-14 May 1662, Charles saw her for the first time there on 20 May. They were married the following day at Portsmouth in two ceremonies, a Catholic one conducted in secret, followed by a public Anglican service at the chapel of Domus Dei. The King was not displeased with his new bride and wrote shortly afterwards to Clarendon "Her face is not so exactly as to be called a beauty, though her eyes are excellent good, and nothing in her face that in the least degree can disgust one. On the contrary, she hath as much agreeableness in her looks as I ever saw, and if I have any skill in physiognomy, which I think I have, she must be as good a woman as ever was born. You will wonder to see how well we are acquainted already; in a word, I think myself very happy, for I am confident our two humours will agree very well together."

Catherine possessed several admirable qualities, but her charms were not potent enough to wean Charles away from the society of his mistresses, and in a few weeks after her arrival she became aware of her painful and humiliating position as the wife of a licentious king. On her first presentation to Charles' official mistress, Barbara Palmer, already the mother of two of Charles' illegitimate children, Catherine fainted and blood spurted from her nose. After the birth of her son, Charles, Barbara demanded to be named "Lady of the Bedchamber" to the new Queen. The King placed her name on the list and Catherine instantly crossed the name off. Despite pleas on Catherine's behalf from his sister Minette, Charles insisted on making Barbara Catherine's lady of the bed-chamber. She eventually accepted Barbara, but withdrew from Charles' company, and despite attempts made by the Earl of Clarendon to moderate her resentment, she declared she would return to Portugal rather than consent to base compliance, which resulted in the whole of her Portuguese retinue being dismissed. However, the violence of her grief and anger soon changed to passive resistance, and then to a complete forbearance and complaisance which gained the king's regard and favour.

Catherine was not a popular choice for the queen of England due to her Catholic religion. Her religion and proximity to the king made her the target of anti-Catholic sentiment. She initially faced hardships due to the language barrier, the king's infidelities and the political conflicts between Roman Catholics and Anglicans. Over time, her quiet decorum, loyalty and genuine affection for Charles changed the public's perception of her. Although her difficulties with the English language persisted, as time went on, the once rigidly formal Portuguese Infanta mellowed and began to enjoy some of the more innocent pleasures of the court. She loved to play cards and shocked devout Protestants by playing on Sundays. She enjoyed dancing and took great delight in organising masques. In a far cry from her convent days, the newly liberated Catherine displayed a fondness for the recent trend of court ladies wearing men's clothing, which we are told, 'showed off her pretty, neat legs and ankles'.

Catherine grew into a quiet, even-tempered young woman. Soon after arriving in England she adopted the English style of dress and arranged her hair in fashionable bunches of ringlets on either side of her face. She became pregnant and miscarried three times, and during a severe illness in 1663, when delirious, thought, for a time, she had given birth. Charles comforted her by telling her she had indeed given birth to two sons and a daughter. When she recovered from this illness she was unable to walk and became temporarily deaf. Her position was a difficult one, and though Charles continued to have children by his many mistresses, he insisted she is treated with respect, and sided with her over his mistresses when he felt she was not receiving the respect she was due. After her three miscarriages, it seemed to be more and more unlikely that the queen would bear an heir. The king was urged by advisors to obtain a divorce, but loyally Charles refused. Amid Charles's debauched and licentious court, she lived neglected and retired. 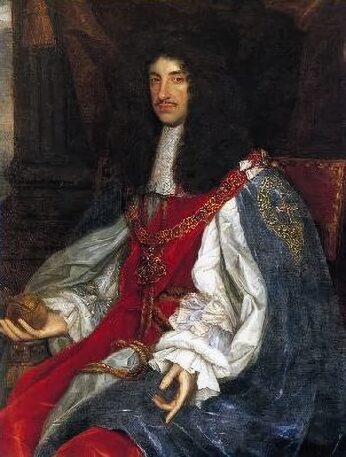 In 1675 the stress of a possible revival of the divorce project indirectly led to illness, which Catherine's physicians claimed and her husband cannot fail to have noted, was 'due as much to mental as physical causes'. In the same year all Irish and English Catholic priests were ordered to leave the country, which left Catherine dependent upon foreign priests. As increasingly harsher measures were put in place against Catholics, Catherine appointed her close friend and adviser, Francisco de Mello, former Portuguese Ambassador to England, as her Lord Chamberlain. It was an unusual and controversial move but 'wishing to please Catherine and perhaps demonstrate the futility of moves for divorce' the King granted his permission. De Mello was dismissed the following year for ordering the printing of a Catholic book, leaving the beleaguered Catherine even more isolated.

The Test Act of 1673 had driven Roman Catholics out of public office and anti-Catholic feelings intensified in the following years. Catherine was criticised for supposedly supporting the idea of appointing a bishop to England who, it was hoped, would resolve the internal disputes of Catholics. Complaints were raised when, despite orders to the contrary, English Catholics attended her private chapel. As one of the highest-ranking Catholics in the country, Catherine was an obvious target for Protestant extremists, and it was hardly surprising that the Popish Plot of 1678 would directly threaten her position. However, Catherine was completely secure in her husband's favour ( "she could never do anything wicked, and it would be a horrible thing to abandon her " he told Gilbert Burnet) and the House of Lords, most of whom knew her and liked her, refused by an overwhelming majority to impeach her. Relations between the royal couple became notably warmer: Catherine wrote of Charles' "wonderful kindness " to her and it was noted that his visits to her apartments became longer and more frequent.

When Charles fatal illness in 1685 she exhibited an eagerness for his reconciliation with the Catholic faith and expressed great grief at his death. As he lay dying Charles asked for Catherine, but she sent a message asking that her presence be excused, and "to beg his pardon if she had offended him all his life." He answered, "Alas poor woman! she asks for my pardon? I beg hers with all my heart; take her back that answer." In the months following her husband's death, Catherine suffered a 'profound depression and melancholy'

Later that year, she made an unsuccessful attempt to intercede with James II for the life of James Scott, Duke of Monmouth, Charles's illegitimate son by Lucy Walter and leader of the Monmouth Rebellion. Catherine remained in England, living at Somerset House, she was able to enjoy religious freedom throughout the reign of James and was present at the birth of James' son James Francis Edward, she stood as his godmother and in an effort to quash the many rumours that were soon circulating about the circumstances of his birth went to the trouble of giving a statement before the Privy Council in defence of the new heir to the throne. she remained in England after his deposition in the Glorious Revolution of William III and Mary II. Her position with William and Mary deteriorated as the practice of her religion led to misunderstandings and increasing isolation. A bill was introduced to Parliament to limit the number of Catherine's Catholic servants and she was warned not to agitate against the government.

Catherine returned to Portugal in March 1699, where she became a tutor to her nephew Prince John. His mother, Maria Sofia of Neuburg, had recently died, and the prince had become depressed as a result. Catherine lifted the young prince's spirits and became the main female figure in his life. In 1703, she supported the Treaty of Methuen between Portugal and England. She acted as regent for her brother, Peter II, in 1701 and 1704-05. Catherine ruled over military campaigns and was highly effective in running the country.

Catherine of Braganza died at the Bemposta Palace in Lisbon on 31 December 1705 and was buried at the Monastery of São Vicente de Fora Lisbon, the Royal Pantheon of the Braganza Dynasty.