Henriette Anne Stuart was the youngest daughter and last child of King Charles I and Henrietta Maria of France, daughter of Henry IV of France. Henrietta, whom Charles I referred to as his 'prettiest daughter', was born on 16 June 1644, during the Civil War with parliament , on the eve of the Second Battle of Newbury, at Bedford House in Exeter, home of William Russell, 5th Earl of Bedford. 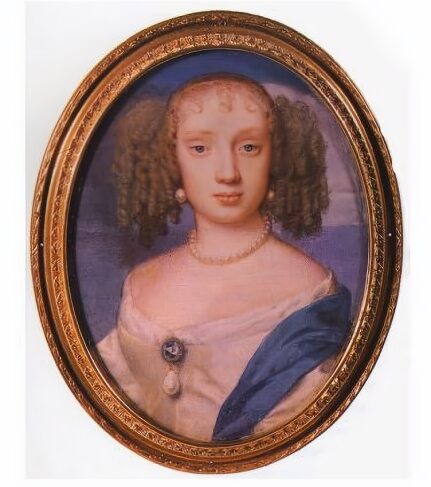 A few weeks before the birth of Henrietta, her mother the Queen had been forced to flee from the city of Oxford for Exeter and it was rumoured that she would not survive the birth due to her poor state of health at the time. The infant Henrietta Anne was placed in the care of Anne Villiers, Lady Dalkeith, in mid July, the infant princess was reported to have suffered from convulsions, but recovered. The queen herself returned to France to solicit aid for her husband's cause from her powerful nephew, King Louis XIV .

Henrietta Anne Stuart as a child 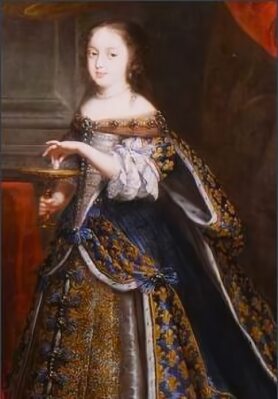 On 26 July, Henrietta met her father, Charles I met his new daughter for the first time on 26th July. Before his arrival, the king had given instructions that the princess should be baptised following the rites of the Church of England, the baptism took place at Exeter Cathedral on 21 July, where a canopy of state was erected in honour of her dignity as a Princess of England.

Henrietta was moved to the safety of Oatlands Palace just outside London, where the she and her household remained for some three months before fleeing secretly in June 1646, Lady Dalkeith ensured Henrietta's safe arrival to France where she was reunited with her mother. Thoughout her life, Henrietta would enjoy a close relationship with her mother, Queen Henrietta Maria, she was never to see her father again.

She first became known as Henrietta Anne at the French court, where the name Anne was added in honour of her aunt, Queen Anne of Austria, sister-in-law of Henrietta Maria and Dowager Queen of France. Henrietta and her mother were given apartments at the Louvre, a monthly pension of 30,000 livres and the use of the Château de Saint-Germain-en-Laye. Much of the money paid to Henrietta Maria by her French relations were sent to her husband in England to aid his rapidly declining cause. In February 1649, Henrietta Maria received news of the execution of her husband Charles I, who had been beheaded by Cromwell on 30 January, It is reported that on receipt of the ominous news, Henrietta Maria stood "deaf and insensible" for a whole hour's duration, before regaining her senses. England was now a republic and their cause seemed very bleak. Henrietta Maria and her daughter moved into the Palais Royal with the young Louis XIV and his mother and brother Philippe, she decided to have her daughter, who had been baptised in the Church of England, brought up as a Roman Catholic. In 1652 they were joined by Henrietta's elder brother, Henry Stuart, Duke of Gloucester, who had previously been in the custody of parliament.

While staying at the Château de Colombes, her residence outside Paris, Henrietta Maria received news of the restoration of the monarchy in England under her eldest son Charles II, she and her daughter accordingly returned to Paris. This sudden change of fortunes caused Henriette's cousin, Philippe Duke of Orléans, the younger brother of Louis XIV, to propose to her. Phillipe was an effeminate and flamboyant homosexual, who had been involved in a series of sexual scandals but was required by the conventions of the day to produce an heir.

While Philippe was impatient to negotiate terms for the marriage, Henrietta Maria was intent on going to England as soon as possible, to prevent her second son, James, Duke of York's announcement of his marriage to Anne Hyde, a former maid-of-honour to her daughter Mary, Princess Royal, at which she was enraged. Anne Hyde was pregnant by James and her eldest son, the new king, had given his support to the arrangement. Her youngest son, Henry, Duke of Gloucester sadly died of smallpox in September 1660 after his return to England. In October, Henrietta and her mother sailed for Dover from Calais, where they stayed at Dover Castle. The French court officially asked for Henrietta's hand on 22 November and her dowry was arranged. Charles II, who was extremely fond of his youngest sister, agreed to give his sister a dowry of 840,000 livres and a further 20,000 towards other expenses. 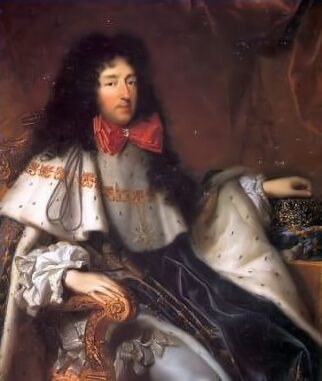 On 24th December 1660, Henrietta's oldest sister, Mary, Princess of Orange died at Whitehall Palace of smallpox, which delayed her return to France. She finally returned to France in January 1661 and signed her marriage contract with Phillipe, (known at the French court as Monsieur), at the Palais Royal on 30 March 1661, their marriage took place the following day. After the celebrations, she and her husband moved into the Palais des Tuileries. Henrietta came to be styled Madame, la duchesse d'Orléans. A year after their marriage Henrietta gave birth to the couple's first child, a daughter named Marie Louise. Rumours circulated in the French court, naming King Louis XIV or Armand de Gramont, Count of Guiche to be the father. Henriette and Guiche had indulged in an affair early in her marriage, despite the complication of his having been a former lover of Philippe. The attentions of Guiche and his brother, Louis, towards his wife aroused intense jealousy in the foppish Phillipe, who complained to his mother Queen Anne, who was incensed at both Louis and Henrietta.

Henrietta gave birth to a son, Philippe Charles, in July 1664 who was given the title Duke of Valois. Sadly, the child died in 1666 of convulsions. The loss of her son was said to have affected Henrietta greatly. She gave birth to a stillborn daughter in July 1665, a further, surviving daughter, Anne Marie was born in 1669. Henrietta was grief-stricken at the death of her mother Henrietta Maria, in September 1669. Henrietta Maria died as a result of taking an excessive quantity of opiates as a painkiller. Philippe's immediate rush to claim his mother-in-law's possessions before even the funeral had taken place, greatly added to his wife's distress. 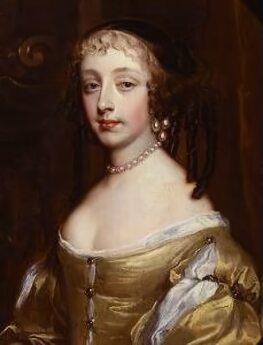 Henrietta was instrumental in diplomatic negotiations between her native England and France. Charles II, made attempts to foster a closer relationship between England and France. Although discussions had been taking place since as early as 1663, it was not until 1669 that Charles admitted he would become a Roman Catholic. Henriette, whose relationship with her husband was poor at the time, was excited at the prospect of a visit to her brother and her homeland and received encouragement from Louis XIV who was eager to come to an agreement with Charles. Charles, who fondly referred to his youngest sister as 'Minette', shared a close relationship with her and they corresponded frequently.

The annoyed Philippe opposed the plan and remained adamant that Henrietta should not be allowed to go complaining to her brother the English king and that she should remain in France. Henrietta ignored him and appealed to the French King Louis XIV, who gave his support to his sister-in-law. She arrived in Dover on 26 May 1670, and remained in England, against her husband's wishes, until the secret Treaty of Dover was signed. on 1 June. Charles agreed to abandon England's Triple Alliance with Sweden and the Dutch Republic in favour of assisting Louis XIV in conquering the Dutch Republic. Provided that the conquest was successful, England was promised several very profitable ports along one of the major rivers that ran through the Dutch Republic in return.

Returning to France following the treaty, Henrietta went to stay at Saint-Cloud with her husband. Since 1667 she began to suffer intermittent, intense pain in her side. In April 1670, then aged 25, Henrietta began to suffer digestive problems which became so severe that it was reported she could consume only milk. According to reports, she was convinced she was being poisoned. On 29 June, at five o'clock, Henrietta drank a glass of iced chicory water, after drinking the water she experienced the pain in her side and cried out, "Ah! What a pain! What shall I do! I must be poisoned!". She asked both for an antidote and for someone to examine the chicory water. She was given common contemporary treatments for colic, as well as anti-poisons. 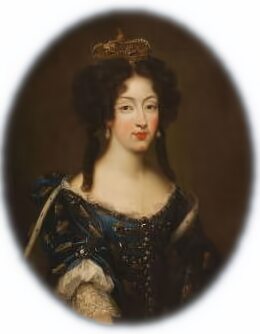 The French royal family hurried to Saint Cloud on hearing the news. Bishop Bossuet attended her and later administered the Sacrament. Henrietta died at 2 o'clock in the morning of 30 June 1670. Rumours spread like wild fire and the Chevalier de Lorraine and the Marquis d'Effiat were said by many to be accomplices in the poisoning. An autopsy was carried out which was attended by seventeen French and two English physicians, the British ambassador and roughly one hundred other onlookers. The official report stated "death from cholera morbus (gastroenteritis) caused by heated bile,", however many observers disagreed with its findings. Henrietta was interred at the Royal Basilica of Saint Denis on 4 July, another service was held on 21 July.

Her brother Charles II was greatly distressed by her death and is said to have exclaimed 'Monsieur (Phillipe) is a villain' on hearing the news. He later retired to his rooms where he locked himself in his bedroom for five days and refused to see anyone. When he emerged he pointedly refused to see either the official envoy sent from Paris by Louis XIV to offer his condolences or the French Ambassador. Although he later learned to control his feelings on the subject for the sake of diplomatic harmony between Britain and France, he is reported to have privately never wavered from holding Philippe responsible for Henrietta's death.

Phillipe himself remarried a year later to Elisabeth Charlotte of the Palatinate, the marriage produced a further two surviving children. Henrietta's eldest daughter Marie Louise became Queen consort of Spain as the first wife of the highly inbred King Charles II of Spain. Marie Louise died like her mother at the age of 26 in Spain in 1689. The circumstances of her death were almost identical to those of her mother's and she too was believed to have been poisoned at the time. Her younger daughter Anne Marie married in 1684 at the age of fourteen, to Victor Amadeus II of Savoy, then Duke of Savoy, later King of Sicily and became the mother of eight children, the eldest of which, Princess Maria Adelaide of Savoy, became the mother of Louis XV. Phillipe lived on until 1701. Henrietta's descendants include Henri, Count of Paris, the Orléanist pretender to the French throne, the king of Spain, the king of the Belgians, the grand duke of Luxembourg and the pretender to the Italian throne.