The third son of George III and Charlotte of Mecklenberg-Strelitz, the future William IV was born at Buckingham House on 21st August 1765 and christened William Henry. The young William was brought up for a career in the navy, joining the crew of Prince George as a midshipman at the age of thirteen. At twenty-one, he was made captain of a frigate and was eventually appointed Admiral of the Fleet. 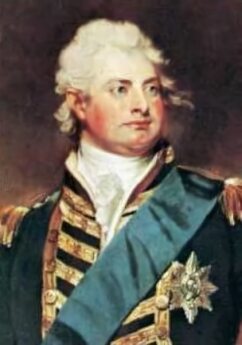 George III created William Duke of Clarence and St. Andrews and Earl of Munster in 1789. He retired from active service in 1790, settled down at Bushey Park and took as his mistress the celebrated actress Dorothy Jordan, by whom he had ten illegitimate children, known as the Fitzclarences.

When his elder brother, the Prince Regent's only child, Princess Charlotte, died in childbirth in 1817 creating a succession crisis, Parliament offered the incentive of paying the Duke of Clarence's large debts if he married and secured the succession in the next generation, William deserted Mrs Jordan without qualms. A marriage was arranged with Adelaide of Saxe-Meiningen , daughter of George Duke of Saxe-Meiningen and Louisa Eleanora of Hohenlohe-Langenburg. A double ceremony, shared by his brother, Edward, Duke of Kent and his bride, Victoria of Saxe-Coburg-Saalfield was conducted on 13th July, 1818 and was attended by the now ailing Queen Charlotte.

Though not beautiful, the German Princess Adelaide was to prove herself to be good-natured, affectionate, kind and loyal. The couple soon became devoted to each other. They took up residence in Hanover. By November 1818, the new Duchess of Clarence was known to be pregnant. Sadly, a cold she suffered from during her pregnancy developed into pleurisy and the bleeding prescribed by the doctors at the time brought on by premature birth. The child was a girl, named Charlotte Augusta, who survived only a day. She was buried beside George I at the Chapel of the Leine Schloss. Adelaide herself was very unwell for some days and at one point reported to be close to death but eventually made a full recovery.

The Duchess quickly became pregnant again and William determined that the child, who was likely to be a future monarch, should be born in England. Adelaide miscarried at Calais. A third attempt to produce an heir resulted in the birth of another daughter, Elizabeth, in December 1820. At first, she seemed a vigorous child, but fell ill and died on 4th March 1821, of an inflammation of the bowels, at which both William and Adelaide were grief-stricken. Adelaide became pregnant for the fourth time but suffered a further miscarriage.

William IV ascended the throne at the advanced age of sixty-nine, on the death of his brother George IV, his was not expected to be a long reign. He was good-natured, well-meaning and informal and in contrast to his brother, was not extravagant but he did exhibit certain oddities and could be rather outspoken at times. On being woken in the middle of the night to be given the momentous news that he was now King, he retired back to bed, announcing that he had never yet slept with a queen.

Charles Greville wrote of the new King in his memoirs "The King's good nature, simplicity and affability to all about him are very striking, and in his elevation he does not forget any of his old friends and companions. He was in no hurry to take upon himself the dignity of king nor to throw off the habits and manners of a country gentleman" He went onto add "Altogether he seems a kind hearted, well meaning , not stupid, bulesque, bustling old fellow, and if he doesn't go mad may make a very decent King." His brother, George IV had not been popular and William was greeted with enthusiasm by all ranks of society. He behaved with great decency at his brother's funeral. He was later ridiculed as Silly Billy, due to his habit of making rambling and intemperate speeches and had very little sense of proportion.

William inherited the throne at a time when the monarchy was at a uniquely low ebb and insisted that his coronation should cost only a fraction of his brother's, which proved a popular move. The Reform Bill, a revolutionary change of the constitution, was passed by Parliament in 1832.

As hope of the King and queen producing a child of their own receded, William's niece, the young Princess Victoria, the daughter of William's deceased younger brother, Edward, Duke of Kent, came to be accepted as heiress presumptive to the crown. Both William and Adelaide were extremely fond of Victoria but her mother kept her away from court as much as possible and did not reciprocate the King and Queen's friendly advances. In 1832, the Duchess of Kent took her daughter on a stately progress through the country and even let it be known that, unlike the King, she was in favour of reform.

William was infuriated by such behaviour and temerity and began to detest his presumptuous sister-in-law. The Duchess of Kent was prompted by her ambitious comptroller, Sir John Conroy, who hoped to be the power behind the throne during the minority of Victoria, which it was felt, would inevitably follow.

In 1836, the King celebrated his birthday at a banquet to which Victoria and her mother were invited to attend. William welcomed his niece, but his reception of her mother was markedly frosty, he later openly criticized her behaviour in his speech to his guests, calling her "incompetent" and "surrounded by evil advisers" and went on at length in a tirade about the insults and slights he had suffered at her hand. The Duchess of Kent sat in stony-faced silence, Princess Victoria burst into tears at the table. The Duchess departed in fury the following day. Relations between the two rival courts thereafter continued to deteriorate rapidly.

The death of William IV

William suffered a severe bout of asthma in April 1837. On 24th May, he had the great pleasure of seeing Princess Victoria reach her eighteenth birthday, which meant the end of the Duchess of Kent's plans to be regent for her daughter.

By June, the King's health began to deteriorate and Queen Adelaide had to attend the races without him. A bulletin was issued stating that the King was suffering from an affection of the chest. He had coughing fits and difficulty in breathing and grew steadily weaker, losing consciousness for spells.

William IV died on the morning of 20th June 1837, of cardiac failure and bronchopneumonia, with Queen Adelaide and his Fitzclarence children at his side. It was discovered at a subsequent autopsy that the valves of his heart had hardened and his liver was swollen. He was buried at St. George's Chapel, Windsor. Queen Adelaide lived on for a further 12 years, dying on 2 December 1849 at Bentley Priory in Middlesex, in the reign of her niece, Queen Victoria.