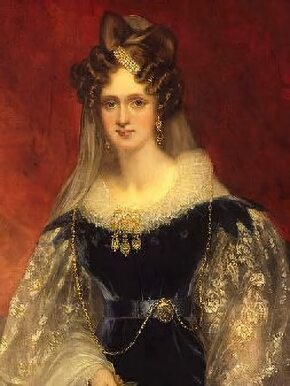 Her marriage to William Duke of Clarence, third son of George III and 27 years her senior, was arranged as a result of the death in childbirth of the Prince Regent's only daughter, Princess Charlotte of Wales in 1817, which left no heir to the throne in the third generation. By the end of 1811, King George III was mad and, although still King in name, his heir-apparent and eldest son George was Prince Regent. In an attempt to secure the succession to the throne, William was informed that Parliament would guarantee his large gambling debts should he marry and produce an heir, William, who had ten illegitimate children, the FitzClarences by his mistress, the actress Dorothea Jordan, agreed to do so.

The couple were married on 11 July, 1818, in a double wedding at Kew Palace, shared with William's brother, Prince Edward, Duke of Kent, who married Victoria, Dowager Princess of Leiningen. The mariage proved a happy one, though not beautiful, Adelaide was to prove herself to be good natured, affectionate, kind and loyal. The couple soon became devoted to each other. They took up residence in Hanover. The couple produced no surviving children. their first child, Charlotte, born in Hanover, was a premature birth possibly brought on by an attack of pleurisy and lived only a few hours. William and Adelaide moved back to England where Adelaide became pregnant again, giving birth to a daughter, Elizabeth, who sadly died at four months old. Adelaide also gave birth to stillborn twin boys.In 1827, William's elder brother, Frederick , Duke of York died, his death was followed a few years later, in 1830 by that of George IV, at which William ascended the throne as King William IV. The couple were crowned on September 8, 1831 at Westminster Abbey. 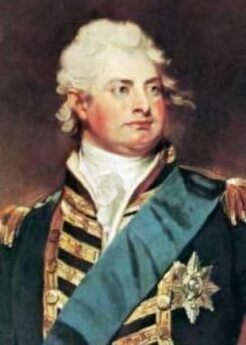 William IV ascended the throne at the advanced age of sixty-nine, on the death of his brother George IV, his was not expected to be a long reign. He was good-natured, well-meaning and informal and in contrast to his brother, was not extravagant but he did exhibit certain oddities and could be rather outspoken at times. On being woken in the middle of the night to be given the momentous news that he was now King, he retired back to bed, announcing that he had never yet slept with a queen.

Adelaide was liked by the British people for her piety, modesty and charity. A large portion of her household income was given to charitable causes. Both Adelaide and William treated his niece the young Princess Victoria of Kent kindly, who came to be acknowledged as his heiress presumptive, despite the hostility between William and Victoria's mother, the Dowager Duchess of Kent. The Dowager Duchess contrived to keep her daughter away from court as much as possible and did not reciprocate the King and Queen's friendly advances. In 1832, she took her daughter on a stately progress through the country and even let it be known that, unlike the King, she was in favour of reform. William was infuriated by such behaviour and temerity and began to detest his presumptuous sister-in-law. The Duchess of Kent was prompted by her ambitious comptroller, Sir John Conroy, who hoped to be the power behind the throne during the minority of Victoria, which it was felt, would inevitably follow.

William, deeply aggrieved at the Dowager Duchess of Kent's behaviour, bluntly announced at his birthday banquet in the presence of Adelaide, the Duchess, Victoria and many guests, that the Duchess was "incompetent to act with propriety", that he had been "grossly and continually insulted by that person", and that he hoped to have the satisfaction of living past Victoria's age of majority, to prevent the Duchess of Kent ever becoming Regent. Everyone was aghast at the vehemence of the speech, and all three ladies were deeply upset, the Duchess herself left in high chagrin. The breach between the Duchess and the King and Queen was never fully healed, but Victoria always remained fond of both of them.

June of 1837 it became evident that the King was dying. The devoted Adelaide remained beside his deathbed, not going to bed herself for more than ten days. William IV died from heart failure in the early hours of the morning of 20 June 1837 at Windsor Castle, where he was buried.

Adelaide had been given the use of Marlborough House, Pall Mall in 1831, she also had the use of Bushey House, Bushy Park at Hampton Court. After the death of William IV, she moved to Witley Court in Worcestershire, from 1842 until 1846. She also stayed at Gopsall Hall in Leicestershire. She stood godmother to Queen Victoria's first child Victoria Adelaide Mary Louise was born in 1840.

Queen Adelaide died of natural causes during the reign of her niece, Queen Victoria on 2 December 1849 at Bentley Priory in Middlesex and was buried beside her husband at St. George's Chapel, Windsor.