Maria Anne Fitzherbert, nee Smythe, was born in 1756 at Tong in Shropshire. She was the firstborn child of Walter Smythe of Brambridge, Hampshire and Mary Ann Errington of Beaufront, Northumberland. Her parents were connected to the English aristocracy, her father Walter Smythe was a younger son of Sir John Smythe, 3rd Baronet, of Acton Burnell, Shropshire, while her mother was the maternal half-sister of Charles William Molyneux, 1st Earl of Sefton. 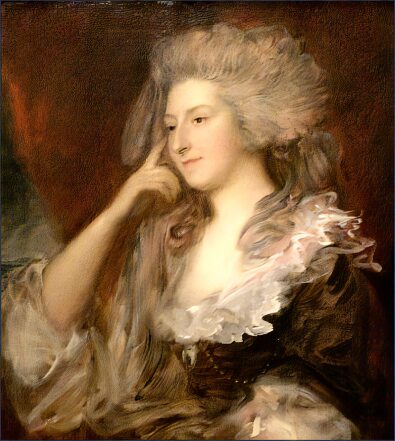 Maria was provided with a Roman Catholic education at a convent in Paris, she has been described as having an aquiline nose and lose teeth. She had hazel eyes, silky blonde hair, and a flawless complexion and was described by a contemporary as " a woman of great accomplishments and beauty ” and “ unquestionably, a most beautiful woman, but perhaps too much inclined to the fullness of figure "

At the age of 18, Maria Smythe married Edward Weld of Lulworth Castle in July 1775, Weld, a rich Catholic landowner was 16 years her senior. He died just three months later after a fall from his horse, having failed to sign a new will since his marriage. His entire estate, therefore, passed to his younger brother Thomas, the father of Cardinal Weld. His widow was left destitute, with little or no financial support from the Weld family. She was consequently obliged to remarry as soon as she could. Three years later, Maria was married to Thomas Fitzherbert of Swynnerton, Staffordshire, who was ten years older than her. The marriage produced a son who died young. She was widowed again on 7 May 1781. Her husband left her provided with an annuity of £1,000 and a townhouse in Park Street, Mayfair.

George IV as Prince of Wales 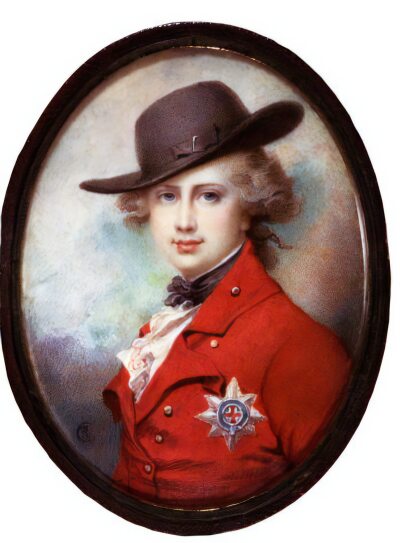 The now twice widowed Maria Fitzherbert entered London high society. In the spring of 1784, while attending the opera with her uncle Lord Sefton, she was introduced to the young George, Prince of Wales, known to his friends as 'Prinny'. The prince was six years her junior and leading figure in fashionable society, he was known as the first gentleman of Europe for his polished and refined manners.

George was smitten with Maria FitzHerbert and pursued her endlessly.   Maria ’s devout Catholic beliefs would not allow her to become his mistress and therefore George decided that marriage was the only way to secure Maria's affections. In June 1784, the infatuated George attempted to make her relent in a dramatically contrived scene at his home at Carlton House in which he appeared to have stabbed himself. Maria accepted a ring he gave her then promptly fled to France. George sent pleading love letters begging her to return to England.

Secretly, the Prince and Maria underwent a form of marriage on 15 December 1785, in the drawing-room of her house in Park Street, London. Her uncle, Henry Errington, and her brother, Jack Smythe, were the witnesses. This invalid marriage ceremony was performed by one of the prince's Chaplains in Ordinary, the Reverend Robert Burt, whose debts of £500 were paid by Prince George to release him from Fleet Prison.

The marriage was not valid because it had not received the prior approval of King George III and the Privy Council as required by the Royal Marriages Act 1772. The largest obstacle to their marriage was Mrs FitzHerbert's Catholic faith, for, under the terms of the Act of Settlement of 1701, from which the Hanoverians derived their claim to the British throne, no prince married to a 'Papist' could succeed to the throne.

Some experts have suggested that Maria had one, or possibly two, children by her union with George IV. During her early days in Brighton with the Prince of Wales, his uncle the Duke of Gloucester and others believed Mrs Fitzherbert to be pregnant. Members of the Wyatt family claim to being descendants of George IV by her. On Maria's death, it was stated that her children were adopted by a Scottish family, named Wyatt, whose name they assumed. Afterwards, they came south settling in Erith, Kent. The Wyatt family, in the person of J.G. Wyatt, a former Erith man who later moved to Moose Jaw, Saskatchewan, Canada and Isabella Annie Wyatt claimed title to a portion of the Fitzherbert estate in 1937. One suggested child of the Prince and his longtime paramour was James Ord (born 1786), whose curious history of assisted relocations and encouragement has been chronicled. Ord eventually moved to the United States and became a Jesuit priest. There is, however, no evidence that Mrs. Fitzherbert ever bore a child, though she did adopt two daughters to whom she was very kind and who were devoted to her.

On 23 June 1794, Maria was informed by letter that her relationship with the Prince was over. George told his younger brother, Prince Frederick, Duke of York and Albany, that he and Maria were "parted, but parted amicably", informing him of his intention to marry their first cousin, Princess Caroline of Brunswick. His father, King George III, considered it was the only way out of an awkward situation, George's massive debts of £600,000 were to be paid the day he married. Caroline was the daughter of his aunt, Princess Augusta Charlotte of Wales (the daughter of Frederick, Prince of Wales) and Charles William, Duke of Brunswick-Wolfenbuttel. She was not a particularly attractive woman, was of course and neglected personal hygiene. At the first sight of his future wife, George was thoroughly dismayed and in a state of shock, "I am not well", he announced, "pray get me a glass of brandy," The marriage ceremony proceeded as arranged on 8 April 1795, attended by his well-pleased father, on the evening of 8th April 1795 at the Chapel Royal at St. James' Palace. The distraught bridegroom spent his wedding night lying on the bedroom floor by the fireplace in a drunken stupor.

Steine House in Brighton where Maria FitzHerbert lived from 1804 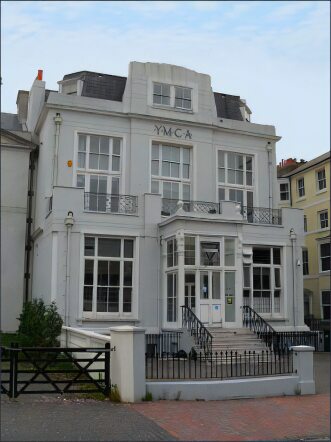 In 1796, just three days after Caroline gave birth to their daughter, Princess Charlotte of Wales, on 10 January, George wrote his last will and testament, bequeathing all his "worldly property . . . to my Maria Fitzherbert, my wife, the wife of my heart and soul". Although by the laws of the country she "could not avail herself publicly of that name, still such she is in the eyes of Heaven, was, is, and ever will be such in mine." However, this did not lead to a reunion. The Prince finally sought a reconciliation with his "second self" during the summer of 1798. By then, he had separated from Caroline for good and was bored with his latest mistress, Frances Villiers, Countess of Jersey. They reconciled again after Pope Pius VII deemed their marriage legitimate.

During the first few years of his reign as King George IV, he turned violently against Maria and several of his former associates. Whenever he mentioned her name it was "with feelings of disgust and horror", claiming that their union "was an artificial marriage. just to satisfy her; that it was no marriage - for there could be none without a licence or some written document." Maria was in the possession of documents to prove their marriage and following the couple's final split demands for her annuity payments were often accompanied by veiled threats to go public with those papers if she did not receive payment. In June 1830, when the King was dying, he eagerly seized a letter of consolation from her and, after reading it, placed it under his pillow. Maria, who had did not realise how ill the king was, was deeply hurt that he had never replied to her final letter. However, before he died, George IV requested that he be buried with a diamond locket with Maria's miniature around his neck, his wishes were carried out.

Following the death of George IV on 26 June 1830, it was discovered that he had kept all of Maria Fitzherbert's letters, and steps were taken to destroy them. Maria informed George IV's brother and successor, King William IV, of their marriage and showed him the document in her possession. He offered her a dukedom, but she refused, asking only permission to wear widow's weeds and to dress her servants in royal livery.

Architect William Porden designed the Steine House, on the west side of Old Steine in Brighton, for her. She lived there from 1804 until her death in 1837. She was buried at St John the Baptist's Church in the Kemp Town area of Brighton.