Mary Adelaide was the daughter of Adolphus Frederick, Duke of Cambridge, the youngest surviving son of George III and Charlotte of Mecklenburg-Strelitz, she was therefore a first cousin of Queen Victoria. Her mother was Princess Augusta of Hesse-Cassel, the daughter of Prince Frederick of Hesse-Cassel. She was born in Hanover on 27 November 1833. 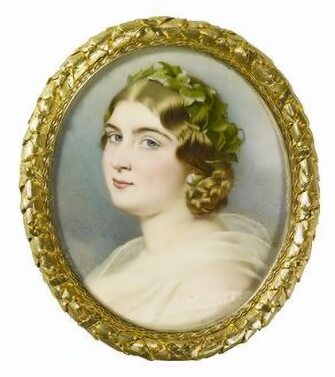 Mary Adelaide had two elder siblings, a brother George born in 1819, who later succeeded his father as Duke of Cambridge and married the actress Sarah Fairbrother, and a sister Princess Augusta, who was born in 1822, who later married her first cousin, Frederick William of Mecklenburg-Strelitz. The family grew up in Hanover where their father served as viceroy in lieu of his older brothers King George VI and King William IV. 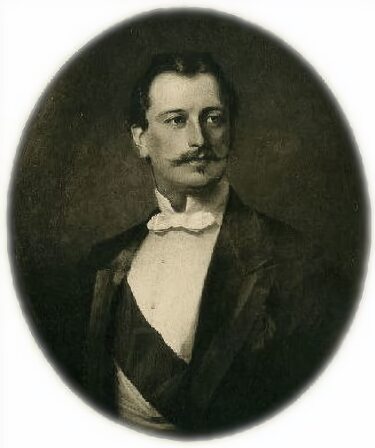 Princess Mary Adelaide of Cambridge was a jovial, good natured and popular member of the royal family, but due to her rapidly expanding girth, the Cambridge family had been hard pressed to find a husband for her. On a visit to Brussels with her mother in 1852, King Leopold of the Belgians reported to his niece Queen Victoria, of their encounter, "Poor Mary, such a beautiful child, is grown out of all compass, to my great regret, Leopold, who is all longitude, was her neighbour and looked quite alarmed." Prince Oscar of Sweden was dispatched to England with a view to a match being made between the pair, but left having failed to propose. "Alas!" stated an exasperated Lord Clarendon "no German Prince will venture on so vast an undertaking".

Princess Mary Adelaide remained unmarried until the age of thirty when she met Count Francis von Hohenstein, the son of Duke Alexander of Württemberg,and Countess Claudine Rhédey von Kis-Rhéde. at a dinner given by the Duchess of Cambridge at St. James's Palace. Francis proposed to Mary Adelaide in Kew Gardens on 6th April and was accepted. Queen Victoria and Mary Adelaide's mother both approved of the match and the happy couple were married on 12 June 1866, at St. Anne's Church, Kew, Surrey. Queen Victoria granted them apartments in Kensington Palace and White Lodge in Richmond Park as a country house. In September 1871, Francis was created Duke of Teck in the Kingdom of Wurttemberg.

Despite receiving only a modest income, Mary Adelaide acquired expensive tastes and indulged in an extravagant lifestyle of parties, expensive clothes and holidays abroad. As a result, she and her husband acquired huge debts and in 1883, they were forced to live abroad to avoid their creditors. They travelled to Florence, Italy and also stayed with relatives in Germany and Austria. They returned to England in 1885, after which Mary Adelaide began devoting herself to charity, serving as patron to Barnardo's, and becoming one of the earliest royals to support a wide range of charitable causes.

Queen Victoria, although often exasperated by the unpunctual and high-spirited cousin, the Duchess of Teck, was fond of her daughter May and with her strong character and sense of duty thought she would make an admirable wife for her rather wayward grandson, Albert Victor, Duke of Clarence and Avondale (1864-1892).

Mary with her children 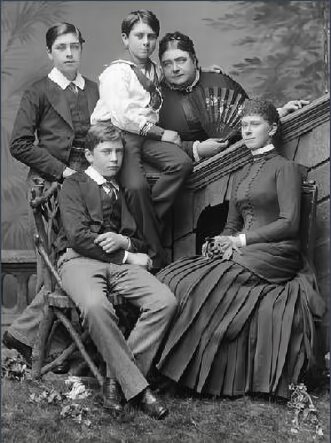 May accepted the proposal of Prince Albert Victor, Duke of Clarence and Avondale the eldest son of Albert Edward, Prince of Wales and Princess Alexandra of Denmark. Their engagement was announced in December 1891. It is said that Queen Victoria influenced her grandson's choice of bride. Tragically, "Eddy" as he was known in the family, developed a heavy cold whilst staying at Sandringham for the Christmas season, which developed into pneumonia, resulting in his death at but 28 years old.

Prince George of Wales, (the future George V), the Prince of Wales second son and now created Duke of York, as well as inheriting his brother's place in the succession, took an interest in his intended bride and to the delight of her mother, Mary Adelaide, himself proposed to Princess May of Teck in May 1893, after a suitable period of mourning. Their marriage took place on 6 July 1893 at the Chapel Royal, St. James's Palace, in London.

Her son Prince Francis, known as 'Frank' in the family, was a gambler and incurred huge debts which resulted in him being sent to pursue his military career in India. He never married, it has been stated that he was vigorously pursued by Maud of Wales, the youngest daughter of Edward VII and Alexandra of Denmark. However Frank displayed little interest in Maud, who eventually married her maternal first cousin, Prince Carl of Denmark, becoming Queen of Norway.

Mary Adelaide died on 27 October 1897 at her home of White Lodge, Richmond Park, Surrey following an emergency operation. She was buried in the royal vault at St. George's Chapel, Windsor.

The Duke of Teck lived on for a further three years, dying on 21 January 1900 at White Lodge. He was buried next to his wife in the Royal Vault at St. George's Chapel, Windsor. During World War I, the anti-German feeling caused King George V to change the family name from the Germanic House of Saxe-Coburg-Gotha to the more English-sounding House of Windsor. The King also renounced all his Germanic titles for himself and all members of the British Royal Family who were British subjects. In response to this, Adolphus of Teck renounced his title of Duke of Teck in the Kingdom of Württemberg. Adolphus, along with his brother, Prince Alexander of Teck, adopted the name Cambridge, after their grandfather, Prince Adolphus, Duke of Cambridge. He was subsequently created Marquess of Cambridge.

Francis of Teck later caused a scandal when he had an affair with the society beauty Ellen Constance, the wife of Francis Needham, 3rd Earl of Kilmorey, to whom he allegedly bequeathed the Cambridge emeralds, part of the Teck family jewels. In order to recover the jewels, his sister Mary, then Queen Mary, had Francis's will sealed by a court, and subsequently negotiated with Lady Kilmorey to buy back the emeralds.