The firstborn son of Albert Edward, Prince of Wales (later Edward VII) and Alexandra of Denmark, Prince Albert Victor, but for an accident of fate, would one day have succeeded his father on the throne of Great Britain.

The Prince was born at Frogmore House, Windsor, on 8th January 1864. Due to being two months premature, he weighed less than four pounds at birth. His grandmother, Queen Victoria, who held strong views on the subject of Christian names, decreed that the heir to the throne in the next generation should be named Albert Victor, the baby was accordingly christened in the private chapel of Buckingham Palace on 10th March 1864, with the names Albert Victor Christian Edward, the last two names being chosen by his parents, although he was always to be known as "Eddy" in the family.

Albert Victor Duke of Clarence and Avondale and his brother George, Duke of York 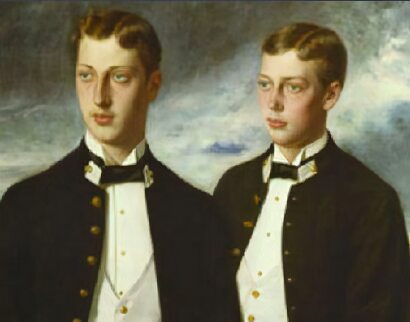 The young Prince Albert Victor was educated with his brother, George, Queen Victoria appointed the Reverend John Neale Dalton as tutor to both boys, who commented that Prince Albert Victor possessed an "abnormally dormant condition of mind ". A career in the navy had been mapped out for the second son, Prince George and it was decided in 1877, that his elder brother should accompany him as naval cadets aboard Royal Navy's training ship, HMS Britannia. Dalton had advised that "Prince Albert Victor requires the stimulus of Prince George's company to induce him to work at all." Queen Victoria was at first adverse to this idea but was eventually persuaded by the Prince of Wales to agree. In 1879, the two princes were sent as naval cadets on a three-year world tour aboard HMS Bacchante. 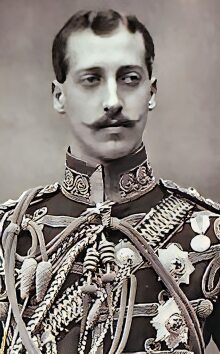 In 1883, Albert Victor was sent to complete his education at Trinity College, Cambridge. His tutor, J K Stephens was similarly unimpressed by the Prince's abilities, commenting "I do not think he can possibly much benefit from attending lectures at Cambridge. He hardly knows the meaning of the words to read." Eddy did, however, become thoroughly involved in undergraduate life. In common with the rest of his social class, he was excused from exams and left Cambridge in 1885, after which he became an officer in the 10th Hussars.

A scandal broke in July 1889 when a male brothel was uncovered in London's Cleveland Street. Following police interrogation the rent boys revealed their clients to include Lord Arthur Somerset, an Extra Equerry to the Prince of Wales. The resulting scandal implicated other figures from the upper echelons of Victorian society and rumour was rife that a member of the royal family was also involved. Albert Victor had not been personally named and it has been suggested that Somerset's solicitor, Arthur Newton, spread the rumours to remove the pressure from his client. The Prince of Wales saw fit to intervene and no prosecutions were ever made. In October 1889, Albert Victor embarked on a seven-month tour of India, it was rumoured at the time that this was to avoid the aftermath of the Cleveland Street Scandal, although it has been argued that the Prince's tour had been arranged since the spring of that year. On his return from India, Queen Victoria created her grandson Duke of Clarence and Avondale and Earl of Athlone.

The prince became enamoured of his highly attractive first cousin, Princess Alix of Hesse and by Rhine, the daughter of Princess Alice of Great Britain and Grand Duke Louis of Hesse. Alix, however, did not reciprocate his feelings and turned down his offer of marriage. She later married Tsar Nicholas II of Russia and was murdered along with her husband and family during the Russian Revolution. In 1890, Eddy fell in love with the Catholic and therefore unsuitable, Princess Hélène of Orléans, the daughter of the Comte de Paris, the pretender to the French throne. Queen Victoria, who was initially opposed to the match, was persuaded otherwise when the couple made a direct personal plea for her support. Hélène wished to convert to the Church of England, which offer was vetoed by her father.

The Queen considered Princess May of Teck, the daughter of her first cousin, Princess Mary Adelaide of Cambridge and Francis, Duke of Teck, as an ideal candidate as a future bride for her grandson. May was considered a sensible young woman and it was thought she would exercise a steadying influence on the prince. Albert Victor duly proposed to Princess May on 3rd December 1891, at Luton Hoo and was accepted. A date for the couple's wedding was set for 27th February 1892.

Before the marriage could take place, fate intervened and Albert Victor became a victim of the great influenza pandemic of 1889-1892. He developed a heavy cold whilst staying at Sandringham House in Norfolk for the Christmas season, which developed into pneumonia, resulting in his death at but 28 years old. His parents and his fiance, Princess May, were at his bedside at the end. His mother, the Princess of Wales, was said to have never fully recovered from the shock of the death of her eldest son and continued to keep his room at Sandringham undisturbed and shrine-like. 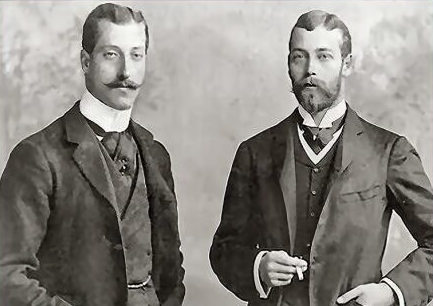 The Prince was buried at the Albert Memorial Chapel at Windsor Castle. At the funeral, the despondent Princess May laid her bridal wreath of orange blossom upon the coffin. His tomb, featuring a recumbent effigy of the Prince in a Hussar uniform, is one of the most magnificent examples of Art Nouveau sculpture in Britain.

After a suitable period of mourning, Princes May was later married to Albert Victor's brother, Prince George, later to succeed his father as George V.

During his tour of India in 1889, Prince Albert Victor became acquainted with Margery Haddon, the wife of Henry Haddon, a civil engineer. Following the death of the Prince, Mrs Haddon came to England, claiming him to be the father of her son, Clarence Haddon. The matter was investigated by the head of the police Special Branch and now an alcoholic, Margery Haddon's claims were eventually dismissed although she is believed to have had an affair with the Prince.

The 1920s saw a re-emergence of her claims, when her son, Clarence, published a book 'My Uncle George V'. Clarence Haddon was later charged with demanding money with menace and attempted extortion after writing to King George V asking for money to silence him. At the trial, documents revealed that Haddon's enlistment papers, marriage certificate, officer's commission, demobilisation papers and employment records all recorded his birth as in or before 1887, which was two years before Albert Victor met his mother. Finding him guilty, the judge, who believed him to be suffering from delusions, bound him over for three years on the condition that he ceased his claims that he was the son of the Duke of Clarence. Haddon breached the conditions and was later jailed for a year.

The story that Prince Albert Victor may have committed the notorious Jack the Ripper murders surfaced during the 1960s. Further allegations that he fathered a child with a Whitechapel woman emerged and that he and several others committed the murders to cover up his indiscretion. None of these stories are grounded in fact or stand up against scrutiny. On 30th September 1888, the date of the murders of Elizabeth Stride and Catherine Eddowes, the Prince was at Balmoral Castle in Scotland and was seen there by newspaper reporters. The Court Circular records that he was not in London at the time of any of the murders.