The supposed Jack the Ripper claims

Albert Victor Christian Edward, known to his family as 'Eddy', eldest child of the future King Edward VII and Queen Alexandra, was born in January 1864. Today he is sometimes described as being a slow learner, politically inept and having been involved with an infamous homosexual brothel in London's Cleveland Street. It has even been suggested he was Jack the Ripper. 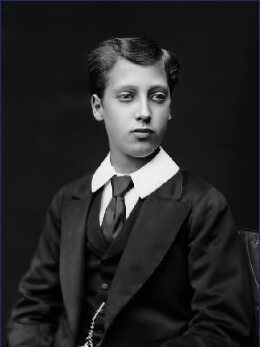 But is such a scathing assessment of the man altogether fair? Just before his proposed marriage there were suggestions he would make a capable Viceroy of Ireland, and letters to his cousin Louis of Battenberg, now held at Southampton University, show his concerns for ordinary families. In his own times Eddy was well liked by the People, who seem to have been genuinely saddened by his death in January 1892 during an influenza epidemic at only just 28. His fiancée, who with close family members was present at his death, wrote to his grandmother Queen Victoria that the look of despair on his mother's face was the most heart-rending thing she had ever seen.

There is no conclusive proof that Eddy had anything to do with the Cleveland Street scandal, and reliable evidence shows he cannot have been Jack the Ripper. Current thinking among some scholars is that his intelligence was called into question early on by his Tutor to hide his failings as a teacher. Others further postulate that his reputation was besmirched deliberately in order to make it look as though the Nation had had a better deal in having his interminably dull younger brother reign over us, and once the ball of character assassination started rolling, even though gently at first, it soon gained momentum and began gathering unpleasant rubbish on its journey.

Between April 1888 and February 1891 eleven women, several of whom were prostitutes, were brutally murdered in and around the notorious Whitechapel district of the East End of London. None of the crimes was solved, but it is the five murders committed between August and November 1888, known as 'the canonical five' that are attributed to a single killer because of the similarity of the killings. The victims' throats were cut and the bodies underwent varying degrees of visceral mutilation; in addition, the last of the five also had her face and breasts mutilated. The unknown killer is now famous worldwide as 'Jack the Ripper' and has spawned a thriving industry of fiction, non-fiction, television programmes and cinema films. Some experts of the day believed that the murderer understood anatomy, suggesting he may have been a surgeon, a theory dismissed by others who said his methods were too crude. Most of the victims were found within a short time of death, yet their killer managed to disappear into the community, perhaps indicating an intimate knowledge of the geography of these very impoverished areas.

Over 2000 people were interviewed and 80 detained, but there were no arrests. In subsequent years 'suspects' and 'accomplices' would include Prime Ministers W. E. Gladstone and Lord Salisbury; writer Lewis Carroll; the artist Walter Sickert; Queen Victoria and her physician-in-ordinary, Sir William Gull; and Prince Albert Victor, who would have been 24 in 1888.

Rumour of Prince Eddy's involvement first appears in print as late as 1962 in author Philippe Julienne's Edward VII of the United Kingdom, with no elaboration and no sources given. An idea first mooted by British physician Thomas Stowell in 1970 went so far as to suggest that through partaking in the sport of stag hunting Eddy could have witnessed the butchering of carcases, knowledge he used to mutilate to the five women.

In 1973 there was a BBC Television 'docu-drama in which the then extremely popular fictional detectives Barlow (Stratford Johns) and Watt (Frank Windsor) evaluated the evidence put forward by a Joseph Gorman that the women were killed to silence them over what they knew about Prince Eddy's secret marriage to Annie Elizabeth Crook, a Roman Catholic commoner working as a shop assistant at 15 Cleveland Street. Gorman was not an actor, but a real person, who claimed to be artist Walter Sickert's illegitimate son.

The idea was taken further by Stephen Knight in 1976 in his book Jack the Ripper: the Final Solution, wherein the unlikely combination of Queen Victoria, Lord Salisbury, the Freemasons and the Metropolitan Police colluded to wipe out a group of women who knew Annie had borne Eddy a child. It was later admitted that the book was a hoax, but the 'evidence' made such compelling reading that it ran to 20 editions and inspired many more books, and also films.

In these theories Eddy is condemned by association: although his behaviour is the reason for the killings, he is not the murderer. In going that step further to suggest he was the actual killer, his homicidal compulsion is explained away as the result of being in the throes of advanced syphilis, which was gradually destroying his brain. Doctors point out that to have reached that stage by the age of 24 Eddy would have had to contract the disease at the age of approximately nine years. While it is true that children can be born with syphilis, there was no sign of either of his parents or his siblings being affected.

The Prince's greatest defence, however, comes from the British Press, the Court Circular, his grandmother's diary and the presence of the many people in his company on the days of the 'Ripper' murders:

Elizabeth Stride and Catherine Eddowes - murdered on 30 September, Stride in Berners Street, Whitechapel and Eddowes in Mitre Square, Aldgate: Queen Victoria recorded in her journal that her grandson lunched with her at Abergeldie near the Balmoral estate in Scotland that day.

Shakespeare wrote in Julius Caesar:'The evil that men do lives after them; the good is oft interred with their bones.' In the case of Prince Albert Victor, evil he almost certainly cannot have done is not only still living after him, but continues to thrive in the public perception of his short life.