Prince Beatrice was born on 14 April 1857 at Buckingham Palace, she was the ninth and youngest child of Queen Victoria and Prince Albert of Saxe-Coburg and Gotha, the Prince Consort.

The child was baptised Beatrice Mary Victoria Feodore, the name Mary was in honour of Princess Mary, Duchess of Gloucester, the last surviving child of King George III and Feodora for the Queen's half-sister Feodora, Princess of Hohenlohe-Langenburg. Victoria, who was not reported to have been fond of babies, whom she once compared to being frog-like, found her little daughter a "pretty, plump, flourishing child with big blue eyes". 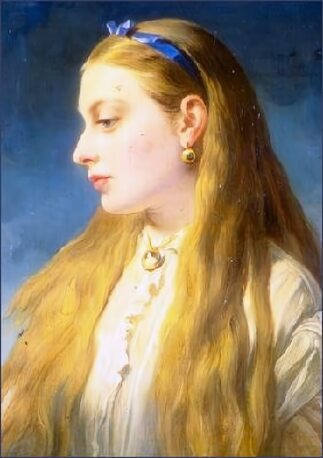 A the time of the death of her father Albert the Prince Consort on 14 December, 1861, Beatrice was but four years old. Her mother the Queen was totally distraught by the loss of the husband whose guidance she had relied on heavily and entered a period of intense reclusive mourning. Beatrice was to become a glimmer of light in her lonely days.

The Queen began to rely solely on Beatrice after all her other children had married. As Beatrice approached adulthood, the queen steadfastly and selfishly opposed Beatrice marrying anyone with the firm expectation that she would always stay at home with her. Beatrice first met the handsome German Prince Henry of Battenberg at the Darmstadt wedding of her niece Victoria, daughter of her older sister Princess Alice to Henry's brother Louis. When Beatrice, after returning from Darmstadt informed her mother that she planned to marry Prince Henry, Victoria reacted with stony silence. The Queen refused to speak to her daughter for several months, instead stubbornly communicating by note.

The Princess of Wales and the Crown Princess of Prussia eventually persuaded the Queen to resume talking to Beatrice. Queen Victoria finally consented to the marriage on the condition that Henry give up his German commitments and came to live permanently with Beatrice and the Queen. Beatrice and Henry married at Saint Mildred's Church at Whippingham, near Osborne House, the Queen's country retreat on the Isle of Wight on 23 July 1885, the bride wore her mother's wedding veil of Honiton lace.

The couple were very much in love and Prince Henry became a welcome addition to the family and with his presence, the court was brighter than it had been since the time before the Prince Consort's death. Beatrice kept her promise to her mother by continuing as her secretary and constant companion. Henry, however, wished to take part in military campaigns, which annoyed the Queen, he felt oppressed by Queen Victoria's constant need for his and his wife's company and when he once slipped away to Corsica with his brother Louis the Queen sent a warship to bring him back.

Beatrice suffered a miscarriage within the first few months of their marriage but gave birth to the couple's first child, a son, Alexander Albert of Battenberg, known as "Drino" to the family, at Windsor Castle in 1886. He was followed by a daughter, Victoria Eugenie Julia Ena known as Ena in 1887. Another son Leopold Arthur Louis arrived on 21 May 1889 and the family was completed by the birth of a third son Maurice Victor Donald on 3 October 1891.

Prince Henry found life at Victoria's court increasingly monotonous, he was made Governor of the Isle of Wight by the Queen in 1889 in an attempt to ease his boredom . Henry, however still yearned for military adventure and succeeded in persuading his stubborn mother-in-law to allow him join the Ashanti expedition fighting in the Anglo-Asante war in West Africa. The Queen finally relented, and allowed him to go. Henry set sail on 6 December 1895. He contracted malaria when the expedition reached Prahsu, about 30 miles (50 km) from Kumasi and was sent home. On 22 January 1896, Beatrice, who was waiting for her husband at Madeira, received a telegram which informed her of Henry's death two days earlier. Devastated with grief, she left court for a month of mourning before returning to her mother.

Beatrice and Prince Henry of Battenberg 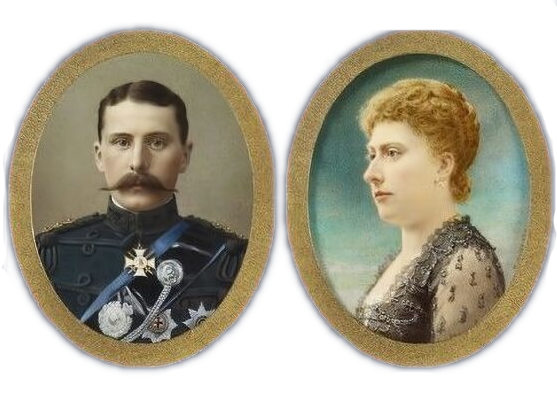 The death of Queen Victoria on 22 January 1901 left Beatrice devastated. She continued to appear in public after her mother's death, the public engagements she undertook were often related to her mother. Beatrice lived at Osborne Cottage in East Cowes, in her capacity as governor of the Isle of Wight, a position bestowed on her by her mother. She sold the property in 1913, when Carisbrooke Castle, home of the Governor of the Isle of Wight, became vacant. She moved into the Castle while keeping an apartment at Kensington Palace in London.

Beatrice commenced the huge task of transcribing and editing her mother's journals, which the queen had been kept since 1831. The hundreds of volumes contained the Queen's personal views of the day-to-day business of her life and included personal and family matters as well as matters of state. Queen Victoria had appointed Beatrice the task of editing the journals for publication, which meant removing private material as well as passages that, if published, might be hurtful to living people. Beatrice deleted so much material that the edited journals are only a third as long as the originals.

Her son Alexander of Battenberg pursued a naval career, the Battenberg family relinquished their German titles and styles during the 1st World War and took the surname Mountbatten, an Anglicised form of Battenberg. Prince Alexander became Sir Alexander Mountbatten, on 7 November 1917, he was created Marquess of Carisbrooke, Earl of Berkhamsted and Viscount Launceston. He married Lady Irene Francis Adza Denison, (4 July 1890 - 16 July 1956), daughter of the 2nd Earl of Londesborough at the Chapel Royal in St James's Palace. The couple had one child, a daughter, Lady Iris Mountbatten (13 January 1920 - 1 September 1982).

Two of Beatrice's sons, Leopold Mountbatten and Maurice, Prince of Battenburg inherited the haemophilia gene from their mother. Maurice was killed whilst engaged in active service in the Ypres Salient during the First World War. At Princess Beatrice's request, he was buried among his men in the Ypres Town Commonwealth War Graves Commission Cemetery. Leopold lived to the age of 32, dying during a hip operation in 1922.

Her daughter Victoria Eugenie married King Alfonso XIII of Spain at the Royal Monastery of San Jerónimo in Madrid on 31 May 1906 and accordingly converted to Catholicism. Though they did not enjoy a particularly happy marriage and Alfonso had many mistresses, the couple produced six children, four sons and two daughters. Two of their sons, Alfonso, Prince of the Asturias, the heir to Spain, and Infante Gonzalo of Spain, were affected with haemophilia.

Alfonso is reported to have never forgiven his wife for passing the disease into the Spanish Royal bloodline. Both children were dressed in padded suits to prevent their undergoing knocks which might result in a life-threatening haemorrhage. Alfonso later renounced his rights to the throne of Spain to marry a commoner, Edelmira Sampedro Ocejo y Robato. A car accident led to his early death in 1938.

Another of Victoria Eugenie's sons Juan was the father of Juan Carlos, the present King of Spain. In August 1934 Gonzalo was spending the summer holidays with his family at the villa of Count Ladislaus Hoyos at Pörtschach am Wörthersee in Austria. The infante Gonzalo died as a result of a traffic accident, he and his sister the Infanta Beatriz were driving from Klagenfurt to Pörtschach. On approaching Krumpendorf, Beatriz, who was driving the vehicle, was forced to swerve to avoid a cyclist, resulting in the car being crashed into a wall. Since neither Gonzalo nor Beatriz appeared badly hurt, they returned to their villa. Several hours later it became clear that Gonzalo had severe abdominal bleeding and died two days later.

Princess Beatrice died in her sleep on the 26th October 1944 aged eighty-seven. Her funeral was held at St George's Chapel Windsor and she was interred in the Royal Vault. On the 28th of August 1945, her body was reinterred at the side of her husband at St Mildred's Church on the Isle of Wight.