Haemophilia in the Descendants of Queen Victoria

Haemophilia acquired the name the royal disease due to the high number of descendants of Queen Victoria afflicted by it. The first instance of haemophilia in the British Royal family occurred on the birth of Prince Leopold on 7th April 1853, Leopold was the fourth son and eighth child of Queen Victoria and Prince Albert of Saxe-Coburg-Gotha. No earlier occurrence of the disease in the Royal family had been known, it is assumed that a mutation occurred in the sperm of the Queen's father, Edward Augustus, Duke of Kent.

Victoria and Albert and their eldest five children 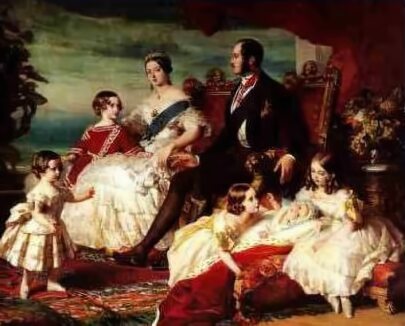 Haemophilia is an X-linked recessive disorder. The blood of a haemophiliac cannot coagulate, due to the fact that one or more of the plasma proteins required to form a clot is absent or reduced in their blood. The condition is passed on to males through females, who do not manifest the symptoms of the disease themselves. A recessive gene, it is carried on the sexual female chromosome X . Males possess XY chromosomes and females XX. Since females have two X chromosomes, they are more often than not carriers.

Prince Leopold, Duke of Albany (1 on chart), the first of Queen Victoria's descendants to suffer from haemophilia was described as a delicate child who remained a constant source of anxiety to the Queen throughout his life, evidence exists that Leopold also suffered mildly from epilepsy, like his grand-nephew Prince John (the youngest son of King George V). He was first diagnosed with haemophilia in 1858 or 1859, Queen Victoria consequently placed restrictions on him, which he chaffed at. He was later created Duke of Albany and married the German princess, Helena of Waldeck-Pyrmont. Leopold died in 1884 at the age of 31, in the south of France. He suffered a fit, the cause or the consequence of a fall on some stairs at Cannes, injuring his knee and hitting his head and died the following morning, apparently from a cerebral haemorrhage. 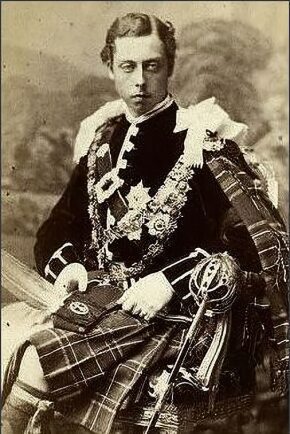 Leopold was the only one of Queen Victoria’s haemophiliac descendants to have children, his marriage to Helena of Waldeck produced two children, a daughter, Princess Alice of Albany (4), later to become Countess of Athlone, who was a further carrier of the disease and an unaffected son, born posthumously, Charles Edward, later Duke of Saxe-Coburg-Gotha. Alice was later to become Countess of Athlone and was to prove a carrier of haemophilia. She married Prince Alexander of Teck, the brother of Queen Mary, their son, Rupert Alexander George of Teck. During the First World War, when anti-German feeling was at its height, in conjunction with changing the name of the Royal House to Windsor, King George V changed that of the Tecks to Cambridge, (for their maternal ancestor, Adolphus, Duke of Cambridge, a son of George III). Alexander of Teck was made Earl of Athlone and Rupert granted the courtesy title of Viscount Trematon. Viscount Trematon (5) was also a haemophiliac. He died on 15 April 1928 from an intracerebral haemorrhage as a result of a car crash in France. On 1 April 1928, Rupert was driving with two friends Paris to Lyon. In the course of overtaking another vehicle, his car hit a tree and overturned. He was taken to a nearby hospital with a skull fracture but never recovered and died in hospital.

Through two of the Queen's daughters, Princess Alice, Grand Duchess of Hesse (2) and Beatrice, Princess of Battenberg (3), both of whom were carriers, the disease was to be spread into many of the Royal Families of Europe. 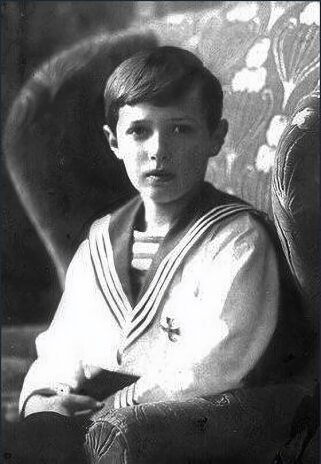 Princess Alice was married to Prince Louis of Hesse-Darmstadt and gave birth to a haemophiliac son, Frederick of Hesse (6), (Frederick William August Victor Leopold Louis) known as Frittie in the family, in 1870. His haemophilia was first diagnosed in February 1873, a few months before his death, when he cut his ear and bled for three days. He died very young in 1873, after a fall from a window induced a brain haemorrhage. Tragically, the child bled to death, leaving his mother inconsolable. Alice also had an unaffected son, the future Grand Duke Ernest Louis of Hesse and five daughters. Two of the daughters, Irene (7) and Alix of Hesse(8) were in turn, carriers of the haemophilia gene.

Haemophilia appeared in the Prussian Royal family when Alice's third daughter Irene married her first cousin, Prince Henry of Prussia, the second son of Queen Victoria's eldest daughter Victoria, Princess Royal and brother of Kaiser Wilhelm II. The disease appeared in two of their sons Princes Waldemar (9) and Henry of Prussia (10). Prince Waldemar died in a clinic in Tutzing, Bavaria during the Second World War due to a lack of blood transfusion facilities. He and his wife fled before the Russian advance, arriving in Tutzing, Waldemar needed a blood transfusion but the U.S. Army overran the area and diverted all available medical resources to treat concentration camp victims, preventing Waldemar's German doctor from treating him, Waldemar died the following day, on 2 May 1945. His brother Prince Henry died at the age of four on 26 February 1904, from a brain haemorrhage, the result of a fall from a chair.

The disease was spread to the Romanov dynasty through the marriage of Alice's fourth daughter Alix, to Tsar Nicholas II, at which she became the Empress Alexandra of Russia. The highly attractive Alix had previously refused a proposal from Albert Victor, Duke of Clarence and Avondale, and heir to the British throne, the eldest son of Bertie, Prince of Wales. Had she accepted, haemophilia could have re-entered the British Royal line. Nicholas had long loved and cherished dreams of marrying Alix, but she turned down his first proposal as she could not bring herself to change her Protestant religion to the Russian Orthodoxy required of a future Tsarina, but after much soul searching, accepted when Nicholas proposed for a second time.

Alix, who became known as Empress Alexandra, produced four daughters before giving birth to their only son, the Tsarevitch Alexis (11), heir to the Russian empire, who was also stricken with haemophilia. As with most mother's of haemophiliacs, Alix was overprotective of her son and worried about him constantly. Through his supposed ability to heal Tsarevich, and Tsarina's confidence in him, Rasputin acquired a fatal influence over the Tsar's decisions which was to lead directly to the Russian Revolution. The entire family perished at the hands of a Bolshevik firing squad in a cellar at Ekaterinberg on 17th July 1918.

The Queen's youngest daughter, Princess Beatrice, fell in love with and married the handsome Prince Henry of Battenberg. The couple produced three sons and a daughter. Two of their sons, Leopold Mountbatten (12) and Maurice, Prince of Battenburg (13) inherited the haemophilia gene from their mother. Maurice was killed whilst engaged in active service in the Ypres Salient during the First World War. Leopold (Leopold Arthur Louis) lived to the age of 32, dying during a hip operation in 1922. 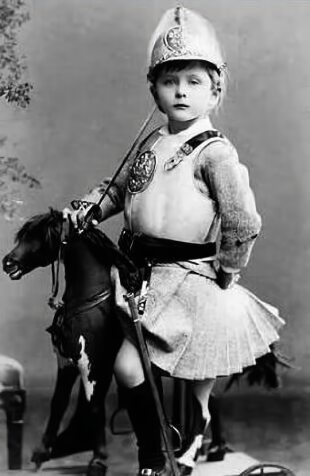 Beatrice's only daughter, Victoria Eugenie of Battenburg (14), known as Ena, was married to King Alfonso XIII of Spain and carried the disease into the Royal House of Spain.

Though they did not enjoy a particularly happy marriage and Alfonso had many mistresses, the couple produced six children, four sons and two daughters. Two of their sons, Alfonso, Prince of the Asturias (15), the heir to Spain, and Infante Gonzalo of Spain (16), were affected with haemophilia. Alfonso is reported to have never forgiven his wife for passing the disease into the Spanish Royal bloodline. Both children were dressed in padded suits to prevent their undergoing knocks which might result in a life-threatening haemorrhage.

Alfonso later renounced his rights to the throne of Spain to marry a commoner, Edelmira Sampedro Ocejo y Robato, after which he took the courtesy title Count of Covadonga. A car accident led to his early death in 1938, when he crashed into a telephone booth and appeared to have minor injuries, but his haemophilia led to fatal internal bleeding. Another of Victoria Eugenie's sons Juan was the father of Juan Carlos, the present King of Spain's father.

In August 1934 the Infante Gonzalo of Spain was spending the summer holidays with his family at the villa of Count Ladislaus Hoyos at Pörtschach am Wörthersee in Austria. The infante Gonzalo died as a result of a traffic accident, he and his sister the Infanta Beatriz were driving from Klagenfurt to Pörtschach. On approaching Krumpendorf, Beatriz, who was driving the vehicle, was forced to swerve to avoid a cyclist, resulting in the car being crashed into a wall. Since neither Gonzalo nor Beatriz appeared badly hurt, they returned to their villa. Several hours later it became clear that Gonzalo had severe abdominal bleeding and died two days later. Porphyria in the Royal Family