George V, the second son of Edward VII, then Albert Edward, Prince of Wales and the beautiful Alexandra of Denmark, daughter of Prince Christian of Schleswig-Holstein-Sonderburg-Glücksburg (later Christian IX of Denmark) and Princess Louise of Hesse-Cassel. George was born on 3rd June, 1865, during the reign of his grandmother, Queen Victoria, at his parent's London residence of Marlborough House. 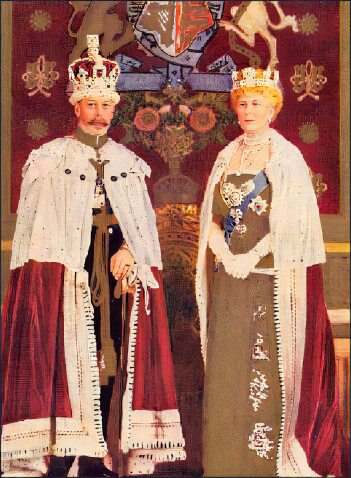 His parents chose the names George Frederick for the infant, which did not please Queen Victoria, who wrote censoriously "I fear I cannot admire the names you propose to give the baby, I had hoped for some fine old name. Frederick is, however, the best of the two and I hope you will call him so. George only came in with the Hanoverian family, however, if the dear child grows up good and wise, I shall not mind what his name is. Of course you will add Albert at the end, like your brothers, as you know we settled long ago that all dearest Papa's male descendants should bear that name, to mark our line, just as I wish all the girls to have Victoria after theirs." A family compromise was reached and the baby was christened George Frederick Ernest Albert.

George was not expected to inherit the throne and despite the opposition of his strongly opinionated grandmother, was trained for a career in the navy, he and his elder brother, Albert Victor, were enrolled on the Royal Navy training ship the Britannia, when he was twelve. He spent fifteen years in the Navy, which resulted in a deep affection for nautical ways and punctuality which he exhibited for the rest of his life.

George matured into a short and slightly built man, with light brown hair, the large blue eyes of the Hanoverians and a clear ringing voice. He was not particularly intelligent but possessed none of his father's vices, his favourite pastime was stamp collecting, he was to build up a large and valuable collection.

His relationship with his father was a close one and George was passionately devoted to his beautiful mother, until her death he always referred to her with much affection as his "Darling Mother dear." On the untimely death from influenza of his elder brother Albert Victor at Sandringham, George was thrust into the limelight when he became heir to the throne. Queen Victoria created her grandson Duke of York. 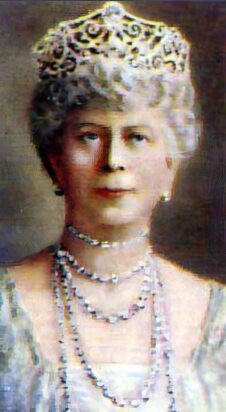 George was married in turn to his brother's fiancee, Princess Victoria Mary of Teck on 6th July, 1893. Mary, or May as she was known, was a dutiful young woman, the daughter of the Austrian Francis, Duke of Teck and the rather obese Princess Mary Adelaide of Cambridge, the great grand-daughter of George III. As the Duke of Teck was the child of a morganatic union, May bore the title her Serene Highness, causing her Wales sisters-in-law to look down at her.

After a rather shy start, both George and his wife grew to be extremely fond of each other. May proved to be a popular Queen Consort, with a deep reverence for the crown and all things associated with it. She was an avid collector of antiques. Neither George V nor the Queen was communicative or demonstrative with their children and both found it difficult to exhibit affection. The King was a gruff and strict father, who his children were terrified of. As a consequence, they have both since come under some criticism of their role as parents. 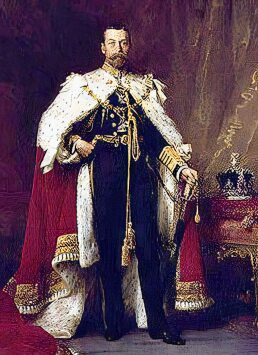 Their first child, David, the future Edward VIII, was born in June1894. Queen Victoria, who held strong views on the subject of Christian names, had wished the child to be called Albert, after her husband, but the young parents held out for Edward and finally got their way.

He was followed a year later by a brother, who, as he was born on 14th December, the anniversary of the death of the Prince Consort was named Albert to placate the Queen. Albert ( later George VI) was a nervous child, with a pronounced stutter, who was forced by his father to wear splints to correct his knock-knees and to write with his right hand, although he was naturally left-handed. He was given the traditional title of the King's second son, Duke of York.

A daughter, Victoria, (Victoria Alexandra Alice Mary) followed in 1897, called Mary after the demise of the old Queen and later to become Countess Of Harewood. A third son, Henry (Henry William Frederick Albert) was born in 1900, who was later to be created Duke of Gloucester and married Lady Alice Montagu-Douglas-Scott daughter of John Montagu Douglas Scott, the 7th Duke of Buccleuch. Prince George (George Edward Alexander Edmund)in 1902, later Duke of Kent and married to Princess Marina of Greece, daughter of Prince Nicholas of Greece and Denmark, the third son of George I of Greece. Her mother was Grand Duchess Elena Vladimirovna of Russia, a granddaughter of Tsar Alexander II of Russia. George was killed in an air accident in Scotland, August 1942.

The couple's fifth son John (John Charles Francis) born in 1905, completed the family, John suffered badly from epilepsy and lead an isolated life on a farm at Sandringham, although he received the occasional visit from his parents, he was kept out of the public eye until his death in 1919. The family lived mainly at York Cottage, a gloomy and cramped residence on the Sandringham estate.

On the death of his father in 1910, George succeeded to the throne, the new Queen, due to her shyness, often come across as rather unsmiling and austere, leading the couple to be referred to by the less reverential as George and the Dragon.

Britain was torn with strikes in the early years of George's reign and Irish nationalist M.P.'s, with the support of the Liberals, were pushing for Home Rule. They were opposed by the Conservatives and Unionists who felt strongly that Protestant Ulster should not be ruled, against its wishes, by Irish Catholics. In the spirit of compromise, the King arranged an all-party conference at Buckingham Palace, which, however, failed to come up with a solution to the problem.

On the outbreak of the First World War, George patriotically endeavoured to boost national morale. He carried out five visits to the troops in Flanders, during one of these he was thrown from his horse which had been alarmed by cheering soldiers, and fractured his pelvis. He and Queen Mary also tirelessly visited military hospitals, munitions factories and blitzed areas.

George V and his cousin Tsar Nicholas II of Russia 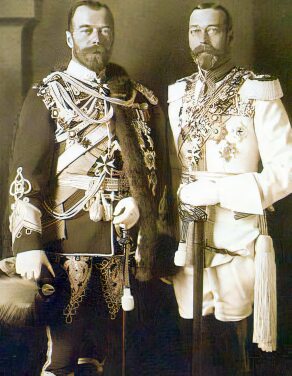 In 1917, concerned that his Teutonic name would alienate his subjects, the King changed the name of his house from the German Saxe-Coburg-Gotha of Queen Victoria's consort to Windsor. The name was suggested by his private secretary. At the same time, his Battenberg cousins were encouraged to change theirs to the Anglicised form of Mountbatten. 'Arrived Prince Hyde, departed Lord Jekyll' wrote the King's cousin, Louis Mountbatten, in a visitor book at the time.

The Fall of the Romanovs and Hohenzollens

The First World War witnessed the fall of many of Europe's age-old royal dynasties, amongst these were the Hohenzollern dynasty in Germany and the powerful House of Romanov in Russia. Tsar Nicholas II was George's maternal first cousin, they bore a striking resemblance, the Tsarina was his cousin on his father's side, being the daughter of Queen Victoria's second daughter, Alice. Tsar Nicholas and his wife and their five children were shot by a Bolshevik firing squad in the basement of a house in Ekaterinburg, towards the end of the war.

George V has since come under severe criticism for his role in the affair. On the abdication of Nicholas II, asylum in England was offered to the Tsar and his family by the British government in response to an urgent request made by the Russian Provisional Government. George V persuaded his Prime Minister to withdraw the offer due to concerns that the move would reflect on his own popularity with the British people and therefore the survival of the House of Windsor.

The German Kaiser was also George's first cousin and he accordingly found the calls to "hang the Kaiser" at the end of the First World War distressing.

George V received his first Labour Prime Minister, Ramsey McDonald in 1923, noting that evening in his diary "Today twenty-three years ago dear Grandmama died, I wonder what she would have thought of a labour government." 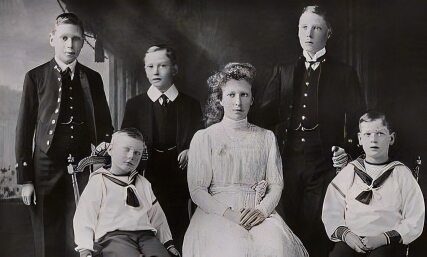 The King's relationship with his son David, Prince of Wales, was fractious, the pair were unable to communicate and in a pattern that echoed that of the Hanoverians, had conflicting opinions on a number of issues. The King disliked David's rather informal attitude and many of his associates. He was also highly alarmed at his eldest son's relationship with a married and already divorced American woman, Wallis Warfield-Simpson.

George gave his first radio broadcast message to his people in 1932, which was well received and a great success. In the event of the King's Silver Jubilee in 1935, he was much affected by the warmth displayed towards him by ordinary people. "I had no idea I was so popular", he confided to the Australian Prime Minister.

The king, a heavy smoker, developed serious bronchial health problems in the late 1920s and although the couple celebrated their silver jubilee in 1935, King George continued to suffer ill health and in the last year of his life, his bronchial problems became so severe that had to be administered oxygen. George was taken seriously ill on 23rd September 1928. He was found to be suffering from septicaemia, or blood poisoning of the lung. As his condition deteriorated, his eldest son, David, the Prince of Wales, was called back prematurely from a visit to South Africa. An operation was performed to drain the infected fluid from the lung by the King's physician, Lord Dawson of Penn, his life hung in the balance and over the following few days his condition was considered dangerous, but he made a gradual recovery.

At the end of 1928, the King was forced to spend time at a convalescent home at Bognor, on the south coast. Queen Mary accompanied her husband. Despite the town acquiring the name Bognor Regis through his period of residence there, the charms of the seaside town had little effect on the king, George, a gruff and difficult patient, did not particularly enjoy his stay and was bored and irritated throughout. He returned to Windsor Castle as soon as he felt able to. He suffered two relapses but stubbornly refused to return to Bognor for further convalescence. When pushed on the point, he irascibly objected, retorting "Bugger Bognor!"

George was always extremely close to his unmarried sister, Princess Victoria of Wales, who rang him every morning to speak to him on the telephone. When she died on 3rd December 1935, the King was very deeply affected and her death overshadowed the Christmas celebrations at Sandringham that year.

George V died at Sandringham House in Norfolk, a place he was known to adore, on 20th January 1936, of a bronchial illness. Fifty years later, it was revealed in the journal History Today, that he was helped on his way by the royal physician, Lord Dawson of Penn. Dawson administered a lethal dose of morphia and cocaine to the dying King so that his death would make the first issue of the Times and would not be reported in the " less appropriate" daily newspapers.

After lying in state at Westminster Hall for four days, during which his four sons took a turn guarding the bier, the King's body was buried at St. George's Chapel, Windsor, the Chapel of the Knights of the Garter. He was succeeded by his eldest son, Edward VIII.

Queen Mary lived on to witness the reign of their grand-daughter Elizabeth II, but did not survive to see her coronation. She died of lung cancer at the age of 85 on 24 March, 1953 and was buried alongside her husband at Windsor.

The children and grandchildren of George V and Mary of Teck:-

The House of Windsor genealogy