George VI was the second son of George V and Mary of Teck. He was born at York Cottage, Sandringham on 14th December 1895, the anniversary of Prince Consort's death and was christened by Albert Frederick Arthur George in his honour. George V and Queen Mary were undemonstrative parents whose children were denied affection. Bertie, as he was known to the family, developed into a withdrawn and nervous child with a pronounced stammer. He was made to wear splints to correct his knock-knees and was naturally left-handed but was forced to write with his right. 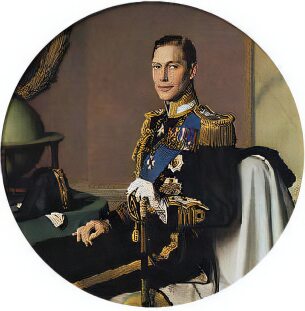 Bertie was taught firstly at home by a tutor but later at the Naval Colleges of Osborne and Dartmouth. In adolescence Prince Albert was overshadowed by his handsome and popular older brother David. Both found communication with their stern and gruff father difficult. As he got older Bertie found his duties as Duke of York awkward and difficult due to his stammer, a source of much embarrassment to him.

In 1913 he entered the navy as a midshipman and in the first World War saw action at the Battle of Jutland. He later qualified as a pilot with the Royal Naval Air Service. Prince Albert was created Duke of York, the traditional title of the monarch's second son, in 1920.

Elizabeth when Duchess of York 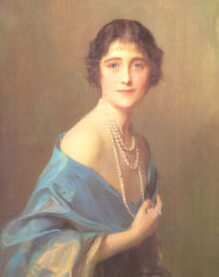 Bertie fell deeply in love with Lady Elizabeth Bowes-Lyon, the daughter of Claude George, Earl of Strathmore and Kinghorne and Nina Cecilia Cavendish-Bentinck. They had first met at a children's birthday party, when she gave him the glace cherry from her cake. She met with his parents ardent approval and Bertie proposed marriage but was turned down as she did not relish the prospect of spending her life in the royal spotlight. Undeterred, he proposed for a second time and was this time accepted.

The couple were married at Westminster Abbey in April 1923. Their union produced two daughters, Princess Elizabeth Alexandra Mary, born in 1926 in London and Princess Margaret Rose, who was born at Glamis Castle, the Scottish seat of his wife's parents in 1930.

Bertie's marriage evoked the approval of his father, who strongly disapproved of his elder son David's bachelor playboy lifestyle. George V liked his new daughter-in-law, as did Bertie's mother, Queen Mary. His parents adored their two small granddaughters, especially the elder known affectionately as Lilibet, who was always the favourite of her grandfather.

On his father's death in 1936, Bertie's elder brother David ascended the throne as Edward VIII, both the Duke and Duchess of York strongly disapproved of his relationship with the twice-divorced American Mrs Simpson. Being trained and brought up only to be an officer in the navy, Bertie was appalled by the abdication crisis and the responsibilities that it unexpectedly thrust upon him. "This is absolutely terrible, I'm quite unprepared for it," he complained miserably and in a panic to Louis Mountbatten, "I've never seen a state paper, I'm only a naval officer, it's the only thing I know about".

He nevertheless accepted the awesome responsibility, "You can be assured " he stated, "that I will do my best to clear up the inevitable mess, if the whole fabric does not crumble under the shock and strain of it all." He chose to reign as George VI to mark the continuity with his father's reign. his coronation took place at Westminster Abbey on 12th May, 1937.

During the Second World War, following in the footsteps of his father, King George VI attempted to boost morale and visited his troops several times and he and the Queen visited factories and blitzed areas of London. Both George VI and Winston Churchill wanted to accompany the British troops on D-Day but was prevented from doing so as they were considered too great a risk. The King's youngest brother, George, Duke of Kent, was killed tragically in a plane crash while conducting a mission to Iceland.

The Festival of Britain was organized in 1951, the centenary year of the Great Exhibition, to celebrate British art and design and to stimulate British trade after the upheaval of the war years. Despite his aged mother, Queen Mary describing the architecture as "quite frightful", the King gave the Festival his full support.

After the war, the King's health, never robust, began to fail. A worrier and a heavy smoker, he underwent a major operation in 1949. By 1951 it became evident that he had contracted lung cancer, although this was never revealed to him.

The last time the King appeared in public, on 31st January 1952, was to see off his daughter Elizabeth and her husband on a tour of Africa. It was remarked that the King looked haggard and gaunt as he stood waving at the airport. George VI died peacefully in his sleep at Sandringham House on 6th February 1952 and was buried at St. George's Chapel, Windsor.

His younger daughter, Princess Margaret died on 9th February 2002, after a series of strokes, her remains were cremated to enable them to be placed in the tomb of her father. His widow Queen Elizabeth, known as the Queen Mother after her husband's death, reached the remarkable age of 101 and died shortly after her daughter on 30th March 2002. She was buried with her husband at Windsor.