Prince Louis of Battenberg was born at Frogmore House in the Home Park, Windsor on 25 June 1900, the second son of Prince Louis of Battenberg and Princess Victoria of Hesse and by Rhine. His father Louis was the son of Prince Alexander of Hesse and by Rhine and Countess Julia von Hauke, who married morganatically, therefore their children bore the title of Serene Highness as their mother was not of royal lineage. The Battebergs became a lesser branch of the Hessian Ducal House. His mother, Princess Victoria was the daughter of Louis IV, Grand Duke of Hesse, and Princess Alice of the United Kingdom, who herself was a daughter of Queen Victoria. Louis was the last of four children his siblings were Princess Alice of Greece and Denmark (who became the mother of Prince Philip, Duke of Edinburgh), Princess Louise of Battenberg (later Queen Louise of Sweden), and Prince George of Battenberg (later George Mountbatten, 2nd Marquess of Milford Haven).

The baby prince was baptised in the drawing room of Frogmore House on 17 July 1900 and was given the names Louis Francis Albert Victor Nicholas although he was familiarly known as 'Dickie' to avoid confusion with his 'Uncle Nicky', who was Tsar Nicholas II, the last of Russia. 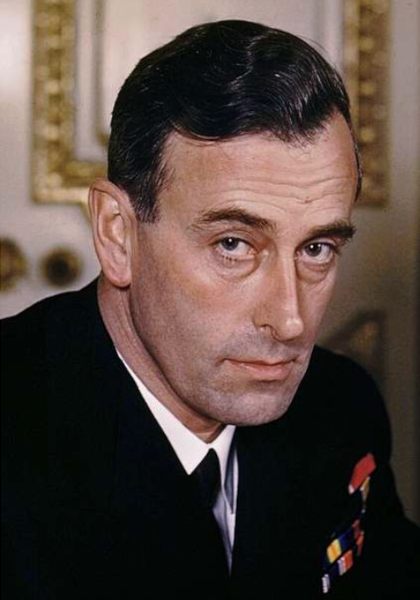 Prince Louis was initially educated by a private tutor and later attended Lockers Park School in Hertfordshire, then going onto on to the Royal Naval College, Osborne. During his childhood he visited his maternal aunt Tsarina Alexandra at St Petersburg and met his cousins the Imprial children. He was particularly fond of his cousin, the Grand Duchess Maria Nikolaevna, third daughter of Nicholas and Alexandra, after the family was assassinated at Yekaterinburg in July 1918, he he kept at his bedside for the rest of his life.

Following the outbreak of the First World War in 1918, to appease anti-German sentiment, King George V issued a royal proclamation changing the name of the British royal house of Saxe-Coburg and Gotha to the more English sounding House of Windsor. Prince Louis's father followed suit dropping his German titles and name and adopting the surname Mountbatten, an anglicised form of Battenberg. His father was subsequently created Marquess of Milford Haven.

Mountbatten was sent as a midshipman to the battlecruiser HMS Lion and, after seeing action in August 1916, he was later transferred to the battleship HMS Queen Elizabeth during the closing phases of the First World War. In 1934, he was appointed to his first command on the destroyer HMS Daring. This he exchange for an older ship, HMS Wishart. Louis attended the funeral of King George V in January 1936 and was appointed a personal naval aide-de-camp to the new king, the charismatic Edward VIII on 23 June 1936.

During the Second World War, Mountbatten was appointed Captain of HMS Kelly, which was to become famous for its exploits. On the night of 9–10 May 1940, the ship was torpedoed by a German E-boat S 31 off the Dutch coast, and Mountbatten thereafter commanded HMS Javelin. On 29 November 1940 the 5th Flotilla engaged three German destroyers off Lizard Point, Cornwall. Mountbatten turned to port to match a German course change. This was "a rather disastrous move as the directors swung off and lost target"and it resulted in Javelin being struck by two torpedoes. He rejoined Kelly in December 1940, by which time the torpedo damage had been repaired. Kelly was sunk by German dive bombers on 23 May 1941 during the Battle of Crete.

In the August of 1943, Winston Churchill appointed Mountbatten the Supreme Allied Commander South East Asia Command with promotion to acting full admiral. During his time in the Southeast Asia Theatre, his command oversaw the recapture of Burma from the Japanese by General William Slim. A personal high point was the receipt of the Japanese surrender in Singapore.

Mountbatten was married on 18 July 1922 to the wealthy heiress Edwina Cynthia Annette Ashley, daughter of Wilfred William Ashley, later 1st Baron Mount Temple. She was the favourite granddaughter of the Edwardian magnate Sir Ernest Cassel and inherited much of his fortune.

Folowing Edwina's death in 1960, Mountbatten was involved in relationships with young women and according to his daughter Patricia, his secretary John Barratt, his valet Bill Evans and William Stadiem. He developed a particularly close relationship with his great-nephew, Prince Charles. Mountbatten became a mentor to Charles, offering advice and support. So close where they that Charles, whose grandfather had died when he was very young, referred to his great uncle as his "Honarary grandfather".

Prime Minister Clement Attlee advised King George VI to appoint Mountbatten Viceroy of India on 20 February 1947, he was charged with overseeing the transition of British India to independence no later than 30 June 1948. He took the the Viceregal Oath on 24th March, 1947. Mountbatten concluded that a united India was an unachievable goal and embarked on a plan for partition, creating the independent countries of India and Pakistan.Mahatma Gandhi however, insisted on retaining a united India and for a while successfully rallied the population in this aim.

When India and Pakistan gained independence at midnight of 14–15 August 1947, Mountbatten remained in New Delhi for 10 months, serving as the first governor-general of an independent India until June 1948.

Earl Mountbatten usually holidayed at his summer home, Classiebawn Castle, in Mullaghmore, a small seaside village in County Sligo in the north-west of Ireland. The castle had formed part of his wife Edwina's inheritance. The village of Mullaghmore stood just 12 miles from the border with County Fermanagh in Northern Ireland and near an area known to be used as a cross-border refuge by IRA members.

On 27 August 1979, a Bank Holiday, Mountbatten went lobster-potting in Donegal Bay with his family in his boat, Shadow V, which had been moored in the harbour at Mullaghmore. Aware of Mountbatten's plans, Thomas McMahon, a member of the IRA, had crept aboard the boat the evening before and concealed a radio-controlled bomb. 15 minutes after setting sail, when Mountbatten was just a few hundred yards from the shore, the bomb was detonated. The boat was destroyed by the force of the blast and Mountbatten's legs were almost blown off. Mountbatten, then aged 79, was pulled alive from the water by nearby fishermen, but died from his injuries before arriving back to shore. “Fifty pounds of gelignite exploded, sending showers of timber, metal, cushions, lifejackets and shoes into the air,” Andrew Lownie, author of a book about the Mountbattens recorded. “Then, there was a deadly silence.”

Also aboard the boat were his elder daughter Patricia, Lady Brabourne; her husband Lord Brabourne; their twin sons Nicholas and Timothy Knatchbull, Lord Brabourne's mother Doreen, Dowager Lady Brabourne; and Paul Maxwell, a local 15 year boy. Both Paul and Mountbatten's young grandson Nicholas were killed by the explosion. The 83 year old Doreen, Dowager Lady Brabourne died from her injuries in hospital the following day. On the same day as a deadly coordinated attack on British troops at Warrenpoint was carried out. The IRA claimed responsibility for Mountbatten's death, stating that the “bombing was a discriminate act to bring to the attention of the English people the continuing occupation of our country”.

“The death of Lord Mountbatten and tributes paid to him will be seen in contrast to the apathy of the British Government and English people to the deaths of over 300 British soldiers and the deaths of Irish men, women and children at the hands of their forces,” the IRA said.

A devastated Prince Charles wrote in his diary that evening “A mixture of desperate emotions swept over me—agony, disbelief, a kind of wretched numbness, closely followed by fierce and violent determination to see that something was done about the IRA.” He added, “Life will never be the same now that he has gone and I fear it will take me a very long time to forgive those people who today achieved something that two world wars and thousands of Germans and Japanese failed to achieve.”

Two hours before the bomb detonated, Thomas McMahon had been arrested at a Garda checkpoint between Longford and Granard on suspicion of driving a stolen vehicle. He was tried for the assassinations in Ireland and convicted in 1979 based on forensic evidence supplied by James O'Donovan that showed flecks of paint from the boat and traces of nitroglycerine on his clothes. He was released in 1998 under the terms of the Good Friday Agreement.

Mountbatten's funeral took place in Westminster Abbey on 5th September, Prince Charles delivered a reading at the ceremony. H was buried at Romsey Abbey, near his Broadlands home.