Prince John was born at York Cottage at Sandringham on 12 July 1905. He was the youngest child of George V, Prince of Wales and Mary of Teck. The name John was chosen despite its unfortunate associations for the royal family, The princes' grandparents youngest son, Alexander John had died the day after his birth. The new prince was known in the family as "Johnnie".

The new addition to the family was christened with the names John Charles Francis on 3 August in the Church of St Mary Magdalene at Sandringham, The name Francis was in honour of his maternal grandfather, Prince Francis of Teck while two of his godfathers bore the name Charles. The only King John in English history had been the notorious Medieval monarch who had been highly unpopular.

Prince John as a child 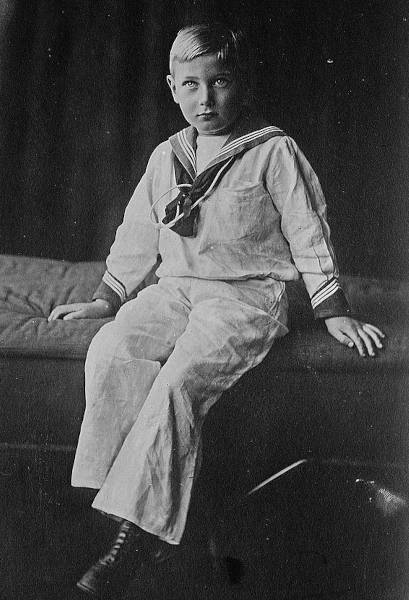 By his fourth birthday, it was becoming apparent that the prince was "painfully slow". He also suffered his first epileptic seizure that year and displayed signs of a disability, probably autism. The Princes Great Uncle, Prince Leopold, Duke of Albany, the fourth son of Queen Victoria, had also suffered from epilepsy. John soon exhibited repetitive behaviours as well as regular misbehaviours, however, his parents hoped his seizures might lessen with time. In 1912, Prince George, nearest in age to Prince John, began attending St Peter's Court Preparatory School at Broadstairs. The following year it was reported that Prince John would not attend Broadstairs and that his parents had not decided whether to send him to school. On the death of his grandfather, Edward VII, in May 1910, Prince John joined the rest of his family to watch the funeral procession from the balcony outside Malborough house. Following the outbreak of the First World War, John was rarely visited by his parents, who were often away on royal duties and the war effort. Prince John slowly began to disappear from the public eye.

As his epileptic seizures increased in severity, in 1916, John was sent to live at Wood Farm, with his faithful nanny "Lala" Bill providing care Though he maintained an interest in the world around him and was capable of coherent thought and expression, he failed to make educational progress, the last of his tutors was dismissed and his formal education ended. At Wood Farm, Prince John had his household on the outskirts of the Sandringham estate Guests at Balmoral recall him during the Great War as a tall but always distant figure glimpsed from afar in the woods, escorted by his retainers." His grandmother Queen Alexandra maintained a garden at Sandringham House especially for him and this was to become one of the great pleasures of his life.

Queen Alexandra wrote of his loneliness. His mother arranged for local children to be playmates to Prince John. One of these was Winifred Thomas, a young girl from Halifax who had been sent to live with her aunt and uncle on the Sandringham estate in the hope it would improve her asthma would improve. The pair became close, taking walks together and working in Queen Alexandra's garden.

Prince John's seizures grew ever more frequently and intense and Lala Bill recorded "we [dared] not let him be with his brothers and sister, because it upsets them so much, with the attacks getting so bad and coming so often." He spent the Christmas Day of 1918 with his family at Sandringham House but was returned to Wood Farm later the same evening.

On 18 January 1919, after a severe seizure, the thirteen-year-old Prince John died in his sleep at Wood Farm at 5:30 pm. Queen Mary recorded in her diary that the news was "a great shock, tho' for the poor little boy's restless soul, death came as a great relief". She and George V travelled to Wood Farm where they found Lala Bill heartbroken. The Queen later wrote that "Little Johnnie looked very peaceful lying there." She later recalled "for [John] it is a great relief, as his malady was becoming worse as he grew older, & he has thus been spared much suffering. I cannot say how grateful we feel to God for having taken him in such a peaceful way, he just slept quietly into his heavenly home, no pain no struggle, just peace for the poor little troubled spirit which had been a great anxiety to us for many years, ever since he was four years old." King George described his son's death as "the greatest mercy possible". John's funeral was held the following day at St Mary Magdalene Church on the Sandringham estate, where he had spent most of his life.

Prince John's eldest brother, the future Edward VII viewed his death as "little more than a regrettable nuisance. Writing to his mistress of the time, he stated, "the poor boy had become more of an animal than anything else." Prince Edward also wrote a letter to his mother, which has since been lost. She did not reply, but he later wrote a missive in apology, stating that the incident had made him feel like "like such a cold hearted and unsympathetic swine for writing all that.... No one can realize more than [she] how poor little Johnnie meant to [him] who hardly knew him ...I feel so much for you, darling Mama, who was his mother".

Queen Mary gave John's companion Winifred Thomas, some of his books, which she had inscribed, "In memory of our dear little Prince." "Lala" Bill affectionately kept a portrait of Prince John on display in her home, together with a letter from him that read "nanny, I love you." The British Epileptic Association has stated, "There was nothing unusual in what the King and Queen did. At that time, people with epilepsy were put apart from the rest of the community. They were often put in epilepsy colonies or mental institutions. It was thought to be a form of mental illness."

Prince John was rarely mentioned thereafter until the discovery of a photo album that was once in the possession of the Duke of Windsor was in Paris in 1998. In the album, photos of John as a child were displayed. “If they feel they have somebody that isn’t up to scratch, they want to write them out of the history books and this happened in the case of Prince John, the moment that he died, we hear no more about him,” Wilson related to a TV documentary 'Prince John, the Windsor’s tragic secret'. 'The Lost Prince', a touching biographical drama covering Prince John's life was written and directed by Stephen Poliakoff and released in 2003.