Edward VIII, or David, as he was known to his family, was the eldest son of George V and Mary of Teck. He was born on 23rd June 1894, at White Lodge, Richmond, Surrey, at the home of his maternal grandparents, the Duke and Duchess of Teck.

At the time of David's birth, his great grandmother, Queen Victoria, still occupied the British throne. Christened Edward Albert Christian George Andrew Patrick David, he was named for his recently deceased paternal uncle, Albert Victor, Duke of Clarence, known to the family as Eddy, who had also been his mother's fiancé. Queen Victoria wrote proudly to her eldest daughter, Vicky, in Germany, that it was the first time in England's history "that there should be three direct heirs, as well as the sovereign alive". 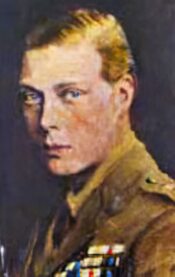 David was educated firstly at the family home of York Cottage on the Sandringham estate by a private tutor and later at Dartmouth Naval College, where his younger brother, Bertie, later joined him.

When his father succeeded to the throne on the death of his grandfather Edward VII, David was given the traditional title of Prince of Wales and was formerly invested at Carnarvon Castle in July 1911, following which he was presented to the Welsh people by his parents.

The preparations for the investiture had been the cause of some friction within the family, although his mother, Queen Mary, thought David looked "charming in his purple and miniver cloak and gold circlet", the Prince himself refused to wear the "preposterous rig" and anticipated with dread what his friends at Dartmouth Naval College would make of it. He was eventually persuaded by his mother to reluctantly appear in the costume.

On the outbreak of the First World War, David was keen to participate. He was allowed to serve but expressed a wish to serve in the front lines, which his father was adamant to prevent. He further evoked his father's disapproval when he refused to wear medals awarded to him by his uncle, Nicholas II, the Russian Tsar. David felt strongly that he had not earned them.

David grew to be a charismatic young man with blond hair and Teutonic good looks coupled with an appealing, boyish charm. He was an extremely popular Prince of Wales and conducted a number of successful tours.

His relationship with his father was often strained and much of his eldest son's behaviour, informality and associates alarmed George V. He was particularly censorious regarding his son's relationship with the American divorcee Wallis Warfield Simpson. The King is reported to have said to his then Prime Minister, Stanley Baldwin, "After I am dead that boy will ruin himself in twelve months." 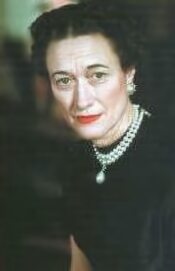 Wallis Warfield-SimpsonEdward succeeded as King on the death of his father in January 1936. Due to the Depression, high unemployment existed throughout Britain. South Wales was an area that was particularly affected, resulting in many families being reduced to poverty. The new King visited the area in the summer of 1936 and was very moved by the deprivation he witnessed. When he remarked that "something must be done to find these people work." it gained him the approval of the people, but not well received by the government.

Edward VIII informed his Prime Minister, Stanley Baldwin, that he intended to marry Mrs Simpson as soon as her impending divorce from Ernest Simpson was ratified. Since the monarch was also head of the Church of England and Defender of the Faith, a conflict of interests was imminent. The King decided he should abdicate rather than create a constitutional crisis. On 10th December 1936, Edward signed the Instrument of Abdication at Windsor, which was witnessed by his three brothers.

On the evening of 11th December, Prince Edward made a radio broadcast to the nation, stating "You must believe me when I tell you that I have found it impossible to carry the heavy burden of responsibility and to discharge my duties as King as I would wish to do, without the help and support of the woman I love." He was succeeded by his brother, Albert, Duke of York, who chose to reign as George VI, to mark the continuity with his father's reign, one of his first actions was to create his brother Duke of Windsor.

The Duke of Windsor married Mrs Simpson in a civil ceremony at the Chateau de Conde, near Tour in France on 3 June, 1937. He remained in exile in France, regarded as a virtual outcast by the rest of the royal family. The marriage produced no children and his brother, the new King, George VI continually refused to grant the Duchess of Windsor the style of Royal Highness, which became a lasting source of ill-feeling and friction between the brothers.

During the Second World War, the Duke of Windsor flirted with Hitler's Germany and was later appointed Governor of the Bahamas. He died of throat cancer in Paris on 28th May 1972. Toward the end of his life, he experienced a reconciliation with his niece, Elizabeth II, who visited the seriously ill Duke when on a state tour of France. His body was returned to Frogmore, Windsor, where his American wife was eventually brought to lie beside him in a grave marked simply Wallis, his wife.