Sandringham estate in Norfolk was purchased by Queen Victoria for £22,000 in 1863 and was intended as the home of her eldest son and heir, Albert Edward, the future King Edward VII.

existing house on the Sandringham estate was demolished and replaced in 1869 by the present Jacobean style red brick structure. There Bertie as he was known in the family, lived with his beautiful Danish wife, Princess Alexandra. The house was badly damaged by a fire in 1892 and was subsequently enlarged. 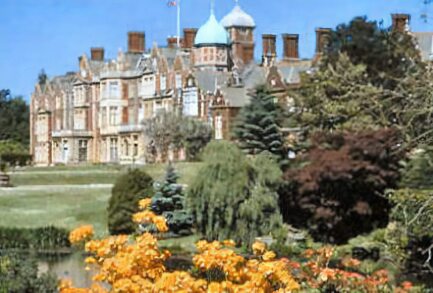 The house parties often held at Sandringham were gay and informal. Bertie and Alexandra loved company and entertaining. Queen Victoria herself visited the house in 1871, when Bertie was dangerously ill with typhoid, the disease that killed his father, he later made a full recovery.

Sandringham was to witness the death of Bertie's eldest son and heir, Albert Victor, Duke of Clarence and Avondale. Eddy, as he was known to the family, contracted influenza during the Christmas period of 1891, which was customarily spent at Sandringham. His illness turned to pneumonia and he died there on 14th January, 1892. His younger brother, Prince George, (later George V) replaced him as heir to the throne and married Eddy's fiance, Princess Mary of Teck. 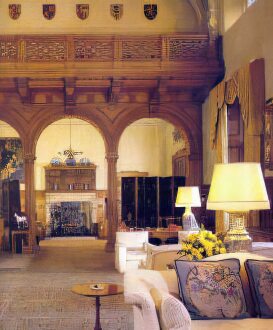 George V and Queen Mary, as the couple became, did not move into Sandringham House until after the death of Queen Alexandra in 1925. They and their family stayed at the cramped York Cottage, a house in the grounds of the estate, where their children where brought up. The King adored the estate, referring to it as "Dear old Sandringham, the place I love better than anywhere else in the world."

The house has seen the deaths of two British monarchs, George V, who died at Sandringham on 20 January 1936, helped on his way by the royal physician, Lord Dawson of Penn, who administered a lethal dose of morphia to the dying King and that of George VI, the father of the present Queen, unaware that he was suffering from lung cancer, he died peacefully in his sleep at Sandringham on 6th February 1952. Over a century has passed since Sandringham became a royal home.

Sandringham House is entered through the large but cosy entrance hall, known as the Saloon. Occupying two storeys, it boasts a minstrel's gallery over the entrance, built to house the band when the room was used as a ballroom. The royal family like to spend their evenings here. The room contains several royal portraits, including those of Queen Victoria and the Prince Consort by Franz Xavier Winterhalter, displayed between the windows and one by Heinrich von Angeli, painted in 1876, which depicts the Prince and Princess of Wales with their eldest son, Albert Victor, Duke of Clarence and their youngest daughter Maud, who was destined to become Queen of Norway. The firebacks on the fireplaces bear the arms of the Prince of Wales and are dated 1870. The early eighteenth century dishes displayed above the fireplace feature portraits of the Stuart monarch, Queen Anne and her consort, Prince George of Denmark. Above the chimney-piece stand a pair of blue and white Italian drug jars which date to the sixteenth century.

The central corridor at Sandringham has trophies of arms, particularly from India, but also from Africa, Europe and several Asian countries adorning its walls. The Indian arms were presented to King Edward VII during his visit there as Prince of Wales in 1875-6. 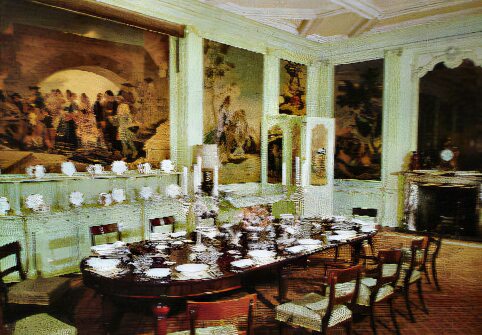 In the Main Drawing Room is a portrait of Queen Alexandra when Princess of Wales is on display, painted by Edward Hughes, another depicts two of her daughters, the Princesses Victoria and Maud. Many of the objects in the room were purchased by the Queen's grandmother, Queen Mary, an avid royal collector. Items on display in the room include a collection of early nineteenth-century Chinese figures and Russian ornaments and drinking vessels in enamelled silver. Queen Alexandra had close ties with the Russian Imperial Family, her sister Dagmar was the wife of Tsar Alexander II and their sons George V and the ill-fated Nicholas II bore a striking resemblance. Queen Victoria was most impressed with this room when she visited Sandringham for the first time from November to December 1871, during her son's illness with typhoid, she particularly admired the painted ceiling and panels.

The Dining Room houses a collection of Spanish tapestries, presented to the Prince of Wales in 1876 by Alphonso XII of Spain, the subjects are derived from cartoons by various Spanish artists, including Goya.

The gardens of Sandringham House are entered through elaborate wrought iron gates, of a flower and leaf design, known as the Norwich gates, they were given as a wedding present to the Prince and Princess of Wales in 1863 by the County of Norfolk and the City of Norwich and are the work of Thomas Jekyll. The gardens have two lakes and contain a magnificent collection of azaleas and rhododendrons, including the unusual rhododendron 'Polar Bear' which flowers in July. There are also some fine camellias. Most of the plants and shrubs are named and bear the date of their planting. York Cottage, the much-loved home of George V and Queen Mary from 1893 to 1926 can be seen on the grounds, it is now used as the Estate Office.

The grounds contain the Sandringham Museum and the Queen's thoroughbred stud. The Queen regularly spends Christmas at Sandringham and stays there until the following February, her annual Christmas broadcasts, a tradition established by her grandfather, George V, are generally made from Sandringham.