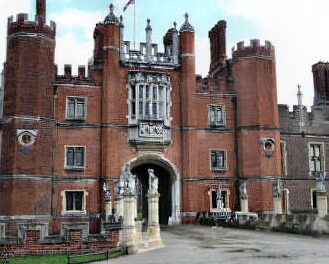 Hampton Court Palace was not originally intended as a royal residence. It was built by Thomas, Cardinal Wolsey, minister of Henry VIII and appropriated by the King when the former failed to bring about the King's divorce from his first wife, Catherine of Aragon. 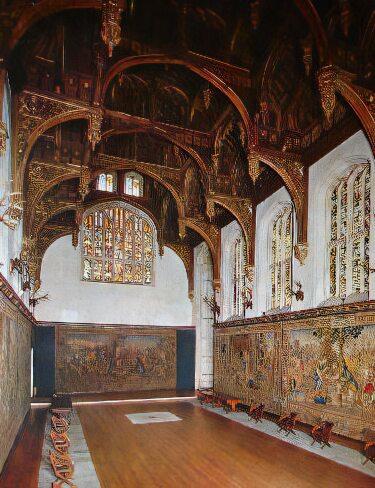 Wolsey's Closet, a strikingly attractive room, is now the solitary survivor of Cardinal Wolsey's personal apartments. It is situated in the range of buildings east of Clock Court. The painted panels in the room illustrate 'the Passion of our Lord' and were commissioned by Henry VIII. The linenfold panelling in the room has been restored to its former glory, while the highly ornate ceiling bears Tudor roses and the Prince of Wales feathers, below the frieze can be seen Wolsey's motto, 'Dominus michi adjutor' (The Lord my helper).

King Henry VIII used the palace regularly, enlarging and altering the building, which was designed around two courtyards. The King added a further courtyard, remodeled the chapel, and rebuilt the Great Hall. The arms of his disgraced second wife, Anne Boleyn, still survive in the Great Hall, with its superb hammer beam roof, where the King dined and in the Inner Gatehouse, elsewhere they were replaced, after her fall from power and subsequent execution, by those of Henry's new love and third wife, Jane Seymour.

The King's only son and heir Edward (later Edward VI) was born at the Palace on 12th October, 1537. He was given a magnificent christening ceremony in the Chapel Royal. Edward's birth was reported to have difficult and protracted and his mother, Jane Seymour, Henry's third wife, did not long survive the experience, dying of puerperal fever at the palace twelve days later. Her body lay in state at Hampton Court for nearly three weeks before its burial at Windsor Castle.

The ghost of Queen Jane is purported to haunt the palace, as it is claimed, does that of Henry's fifth wife, Catherine Howard, who, on being arrested for high treason at Hampton Court attempted to reach her husband to make an appeal directly to him, she was apprehended by guards as she ran to Wolsey's Gallery and pulled away screaming. She later met her death by beheading at the Tower of London. Ever after, sightings of the deeply agitated Catherine have been reported on the gallery, now renamed the Haunted Gallery.

The Chapel Royal boasts a superb golden hammer beam roof. The Astronomical Clock which decorates Clock Court was made for Henry VIII in 1540 by Nicholas Oursian. Henry's last marriage, to Catherine Parr took place there in 1543, in the Chapel Royal. The Palace continued to be occupied by Henry's successors, the unfortunate Charles I was imprisoned there during the Civil War, after his execution the palace was retained for the use of the Lord Protector, Oliver Cromwell. 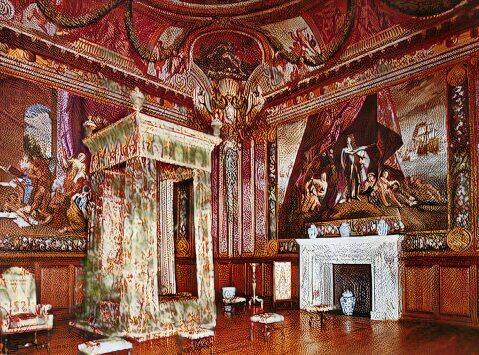 King Charles II filled in the Tudor moat and laid out the Home Park in its present form. He also planted the long avenue of limes which radiate from the East Front as well as installing the Great Canal.

Most of the Tudor Royal Apartments were swept away by the architect Sir Christopher Wren, who was commisioned by William III and Mary II to design a series of State Apartments. William who suffered badly from asthma, disliked the smog laden air of London and wished for a country retreat.

The superb paintings on the ceiling of the King's bedroom are the work of Antonio Verrio and fittingly depict Endymion lying in the arms of the god of sleep, Morpheus. Verrio, a celebrated Italian artist is also responsible for the magnificent murals that adorn the King's Staircase, the Queen's Drawing Room and the ceiling and wall panels in the Banqueting Room. Carvings by Grinling Gibbons may be seen on the frames of the mirrors between the windows in the Banqueting Room and the oak reredos in the chapel.

Further State Rooms were added by the Hanoverian monarch George II, but his grandson and heir, George III, took a dislike to the palace and never lived there. The Royal Apartments were first opened to the public by Queen Victoria.

In March 1986 a disastrous fire gutted an entire wing of the Palace, which underwent a extensive and sympathetic restoration involving a working party of architects, historians and other experts.