Osborne House, situated at East Cowes on the Isle of Wight, is a former country retreat of Queen Victoria and her consort, Prince Albert. The couple purchased the property in October 1845, when searching for a home removed from the pressure of life at court, 'a place of one's own - quiet and retired', as the Queen herself put it. The estate consisted of the house and 342 acres of land, plus the adjacent Barton Manor which was used to house equerries and grooms. 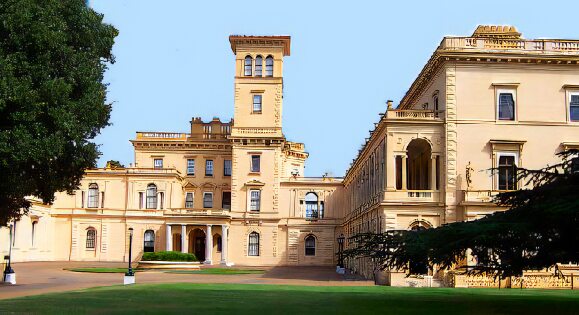 The Queen who remarked that "It is impossible to imagine a prettier spot", had enjoyed holidays on the Isle of Wight as a child, while the setting of the house appealed to Albert; the stunning views of the Solent reminding him of the Bay of Naples in Italy. The existing Georgian mansion was, however, considered too small for their requirements and was demolished.

The new Osborne House was constructed between 1845 and 1851. Designed in Italian Renaissance style by Prince Albert, in conjunction with Thomas Cubitt, the London architect and builder. The sale of George IV's ostentatious Royal Pavilion at Brighton paid for much of the furnishings. 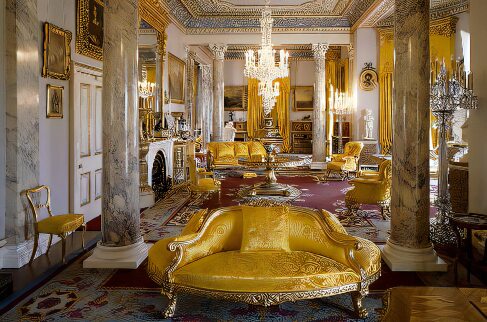 The new building consisted of the original square wing known as 'The Pavilion', which contained the principal and royal apartments. The house is filled with original furnishings and priceless artworks. The apartments contain many reminders of the Queen's many dynastic links with other royal families of Europe. Family photographs still stand on the desks of both Queen Victoria and Prince Albert. The Billiard Room contains a huge porcelain vase, a gift to the Queen from the fabulously wealthy Tsar of Russia.

Marble sculptures, commissioned by the couple, line the classically designed Grand Corridor of the house. The grandeur of the Billiard Room, Queen's Dining Room and the Drawing Room on the ground floor displays a marked contrast with the much more homely and unassuming decor of the royal apartments on the first floor. These rooms include the Prince's Dressing Room, the Queen's Sitting Room, The Queen's Bedroom and the children's nurseries, which were intended for private, domestic use. Both Victoria and Albert were determined to bring up their children in as natural and loving an environment as their situation allowed.

The 'main wing' of the building, which contained the household accommodation and council and audience chambers, was a later addition.

The Gardens at Osborne House

Prince Albert designed the gardens and laid out the estate and woodlands. The terraced formal gardens, with views down to the sea, are in the Italianate style, which complements the house. The Walled Garden, with its triumphal arches of Victoria plums, was restored by English Heritage in 2000 as part of the Contemporary Heritage Gardens Scheme, the greenhouses contain exotic plants which were fashionable in Queen Victoria's time. The grounds contain mature specimens of unusual trees, many of which were some of the first introductions to Britain and rare red squirrels can often be sighted in the gardens and grounds.

Below the gardens was a private beach, "We have quite a charming beach to ourselves," wrote the Queen in 1845 and it was here that Victoria regularly bathed and where her children learned to swim. Writing of her first bathing experience, she said: 'I thought it delightful till I put my head under water, when I thought I should be stifled.' The original wooden bathing machine, which ran down on a ramp into the sea and from which Victoria would emerge in her swimsuit, has now been returned to the beach.

The grounds include a 'Swiss Cottage', complete with child-size furniture, where Victoria and Albert's nine children were encouraged to garden. Each of the children was given a rectangular plot in which to grow fruit, vegetables and flowers. They would then sell their produce to their father. Prince Albert used this as a way to teach the basics of economics. The children also learned to cook in the Swiss Cottage, which was equipped with a fully functioning kitchen. There is now a highly attractive wildflower meadow near the Swiss Cottage which contains three different types of orchid including the Pyramidal Orchid, as well as other rare native plants. 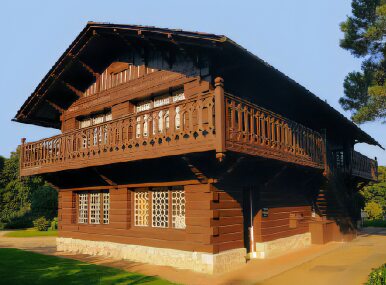 Victoria and Albert and their children stayed at their country retreat for lengthy periods each year, in the spring for the Queen's birthday in May; in July and August when they celebrated Albert's birthday; and just before the Christmas season. In a marked break from the past, Queen Victoria and Prince Albert allowed photographers and painters to capture their family in the grounds and in the house, partly for their own enjoyment and partly as a form of propaganda for the nation to show what a happy and devoted family they were. Many thousands of prints of the royal family were sold to the public. This domestic idyll was brought to a close on Prince Albert's early death at Windsor Castle in December 1861, but during her widowhood, Osborne House continued as one of the Queen's favourite homes.

The final addition to the house was a wing built between 1890 and 1891, after the death of Prince Albert. On its ground floor, it contains the famous Durbar Room (pictured left), which celebrates Victoria's role as Empress of India. Designed by Lockwood Kipling (Rudyard Kipling's father), the room derives its name from an Anglicised form of the Hindi word durbar, meaning court. The room was built for state functions and decorated by Bhai Ram Singh in an elaborate and intricate style. 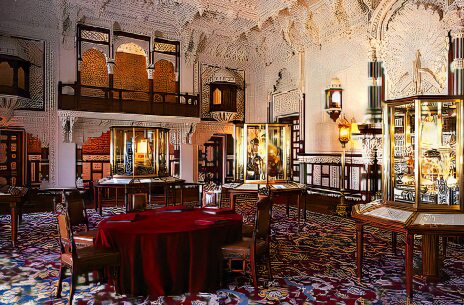 The Durbar Room now contains the gifts Queen Victoria received on her Golden and Diamond Jubilees. These include engraved silver and copper vases, Indian armour and even a model of an Indian palace. A fantastic stucco peacock adorns the wall over the fireplace, the walls are decorated with Indian symbols and the floor is covered with a carpet from Agra. The room also contains four dining chairs built to the specification of Bhai Ram Singh, Kipling's assistant. The Indian associations of Osborne House also include a collection of paintings of Indian persons and scenes, painted at Queen Victoria's request by Rudolf Swoboda. There are both depictions of Indians resident or visiting Britain in the nineteenth century and scenes painted in India.

The first floor of the new wing was for the sole use of Princess Beatrice and her family. Beatrice was the Queen's youngest daughter, who remained permanently with her.

Queen Victoria breathed her last at Osborne on 22 January 1901, surrounded by her family, however, the Queen's love for the house was not shared by her children. Although Victoria's will left strict instructions that Osborne was to stay within the family, a year after her death the new King, Edward VII, presented the building to the nation, with the exception of Princess Beatrice and Princess Louise, who both retained houses on the estate, the rest of the royal family saw Osborne as something of an inaccessible white elephant. The royal apartments on the upper floors of the pavilion wing, including the late Queen's bedroom, were turned into a private museum.

In 1903, part of the Osborne estate became a junior officer training college for the Royal Navy known as the Royal Naval College, Osborne. The College closed in 1921, with the last students leaving on 9 April 1921. Former students included Queen Victoria's great-grandsons, the future Edward VIII and George VI, and their younger brother George, Duke of Kent. During World War I, the secondary wings of Osborne House were used as an officers' convalescent home, known as King Edward VII Retirement Home for Officers.

Osborne House is presently in the care of English Heritage and is open to the public, there is also a restaurant and cafe.