Princess Alice, the third child and second daughter of Queen Victoria and Albert of Saxe-Coburg-Gotha, the Prince Consort, was born in the early hours of the morning of 25 April 1843 at Buckingham Palace.

The new arrival was christened in the private chapel at Buckingham Palace by William Howley, the Archbishop of Canterbury, on 2 June 1843. She was given the names Alice Maud Mary. Alice was chosen as Victoria's first Prime Minister, Lord Melbourne, had once commented that 'Alice' was his favourite female name. Maud was chosen for Princess Sophia Matilda of Gloucester, a niece of King George III and Alice's godmother, Mary was added because Alice was born on the same day as Queen Victoria's aunt, Princess Mary, Duchess of Gloucester. 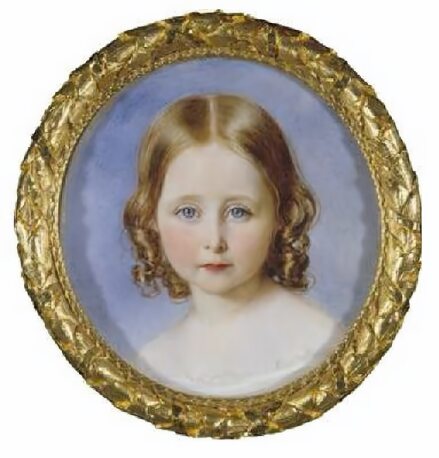 Soon after Alice's birth in 1844, Queen Victoria and Prince Albert bought Osborne House at East Cowes on the Isle of Wight as a family holiday home, the queen had enjoyed holidays on the Isle of Wight as a child, while the setting of the house appealed to Albert; the stunning views of the Solent reminding him of the Bay of Naples in Italy. At Osborne, Alice and her brothers and sisters were taught practical skills such as housekeeping, cooking, gardening and carpentry. The grounds included a 'Swiss Cottage', complete with child-size furniture, where Victoria and Albert's nine children were encouraged to garden. Each of the children were given a rectangular plot in which to grow fruit, vegetables and flowers. They would then sell their produce to their father. Prince Albert used this as a way to teach the basics of economics.

Victoria and Albert favoured a monarchy based on family values and their children slept in sparsely furnished bedrooms with little heating. Alice, a sensitive and caring child, often visited the tenants when staying at Balmoral in Scotland. 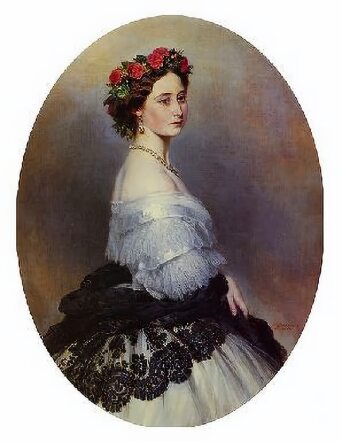 Alice grew into a serious-minded and compassionate young woman. Her ageing maternal grandmother Victoria, Duchess of Kent, died at the age of 74 at Frogmore on 16 March 1861. During her final illness, Alice had spent a great deal of time nursing her grandmother through her final illness and often played the piano for her in Frogmore's drawing-room. Following her duchess' death, the emotional Queen Victoria broke down with grief and came to rely heavily on Alice for support.

Tragedy struck again in the family when only a few months later, on 14 December 1861, Albert died at Windsor Castle of typhoid fever. During his final illness, eighteen-year-old Alice remained at his bedside. The Queen was distraught by the loss of the husband whose guidance she had relied on heavily and entered a period of intense reclusive mourning. Alice, along with her younger sister Princess Louise, became her mother's unofficial secretary.

Alice's eldest sister, Victoria, Crown Princess of Prussia, suggested the German Prince Louis of Hesse, the nephew of Grand Duke Louis III of Hesse, as a prospective husband for Alice. Louis and his brother Prince Henry were invited to Windsor Castle in 1860, ostensibly to watch the Ascot Races in the company of the royal family, but in reality, the visit was an opportunity for the Queen to inspect Louis as a potential son-in-law. It was clear that Louis and Alice liked each other and Victoria approved of Louis,who before he left, asked for a photograph of Alice.

Alice and Prince Louis of Hesse became engaged on 30 April 1861 and were married on 1 July 1862, in the dining room of Osborne House, which had been converted into a temporary chapel. The wedding was a gloomy affair, Alice wore a white dress with a veil of Honiton lace, but was required to wear black mourning clothes for her father both before and after the ceremony. The Queen wrote to her eldest daughter, Victoria, known as 'Vicky' to the family, that the ceremony was "more of a funeral than a wedding". Louis and Alice spent their honeymoon at St Claire in Ryde, on the Isle of Wight. When the Queen visited the newly married couple, Alice tried hard not to appear "too happy". Despite this, Queen Victoria was jealous of her daughter's happiness.

Alix of Hesse and the Tsarevich Nicholas 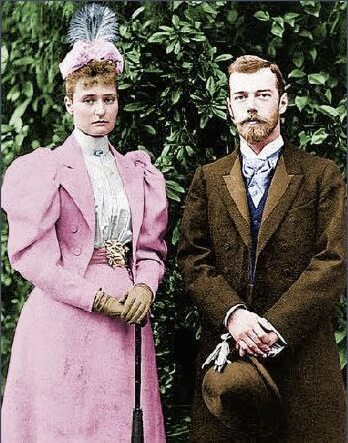 Princess Marie Victoria Feodore Leopoldine of Hesse and by Rhine (24 May 1874 - 16 November 1878). Louis and Alice had little in common. Alice became increasingly frustrated at her what she saw as Louis' inability to engage in intelligent conversations. On 29 May 1873, Alice's younger son, Friedrich, known as "Frittie" in the family, died after falling 20 feet from a window. Friedrich suffered from haemophilia, inherited from his mother, who was a carrier of the disease. Alice's youngest brother, Leopold Duke of Albany was also afflicted with the disease, as were several of her nieces and nephews. Although Friedrich regained consciousness after the fall, the resultant haemorrhage could not be staunched. Alice never recovered from her son's death.

The Grand Duchess had developed an interest in nursing and befriended Florence Nightingale. She to an active role in 1866 during the second of Bismarck's wars.

On 13 June 1877, Grand Duke Louis III of Hesse died, and Louis and Alice became the Grand Duke and Duchess of Hesse. However, she was never popular in Darmstadt.

Tradgedy struck for a second time in November 1878, when the Grand Ducal household fell ill with diphtheria. Alice's eldest daughter Victoria was the first to be afflicted by the disease, which spread to Alice's other children Alix, Marie, Irene and Ernest. Her husband Louis became infected soon after. Only her second daughter, Ella, remained free of the disease and, for her own safety, was sent to stay with her paternal grandmother in nearby Bessungen. The youngest child Marie became seriously ill on 15 November, and died of diptheria on 16 November 1878.

For several weeks, Alice kept Marie's death secret from her other children but finally informed her son Ernest in early December. As he wept, Alice kissed him in an attempt to comfort him. On 14 December, the anniversary of her father's death, she became seriously ill with diphtheria contracted from her son and died at the age of 35 just after 8:30 am. Alice was buried on 18 December 1878 at the Grand Ducal mausoleum at Rosenhöhe outside Darmstadt. 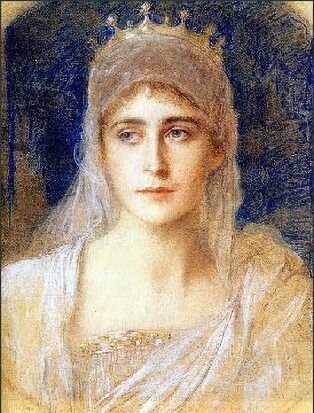 Alice's eldest daughter, Victoria, through her daughter Princess Alice of Greece, became the grandmother of Prince Phillip, Duke of Edinburgh, husband of the present queen. Her daughter Irene married her first cousin, Prince Henry of Prussia, the second son of Queen Victoria's eldest daughter 'Vicky' and brother of Kaiser Wilhelm II. Haemophilia appeared in two of their sons, Princes Waldemar and Henry of Prussia. Prince Waldemar died in a clinic in Tutzing, Bavaria during the Second World War due to a lack of blood transfusion facilities. He and his wife fled before the Russian advance, arriving in Tutzing, Waldemar required a blood transfusion but the U.S. Army overran the area and diverted all available medical resources to treat concentration camp victims, preventing Waldemar's German doctor from treating him, Waldemar died the following day, on 2 May 1945. His brother Prince Henry died at the age of four on 26 February 1904, from a brain haemorrhage, the result of a fall from a chair.

Two of Alice's daughters perished in the Russian Revolution, Princess Elisabeth of Hesse known as Ella by the family, married Grand Duke Sergei of Russia, a younger brother of Tsar Alexander III on 15 June 1884. Elizabeth was taken to Alapaevsk along with other members of the Russian royal family on 20 May 1918, The prisoners were awakened on the night of 17 July and taken in carts 11 miles from Alapaevsk to an abandoned iron mine with a pit 66 feet deep, where the victims were thrown in alive, Elizabeth first. Hand grenades were hurled into the shaft after them. Vassili Ryabov, one of the killers, claimed that following the explosion of the hand grenades, he heard Elizabeth and the others singing an Orthodox hymn from the bottom of the shaft, a further grenade was thrown in, but the singing continued. On 8 October 1918, soldiers from the White Army discovered the remains of Elizabeth and the others, still in the shaft.

Her younger sister Alix, known as the Empress Alexandra Feodorovna was also murdered, along with her husband Tsar Nicholas II, their son the Tsarevich Alexei, who suffered from haemophilia, and their four daughters, Olga, Tatiana, Marie and Anastasia. The Tsar and his family were moved to Tobolsk in Siberia in August 1917. After the Bolshevik Revolution of November 1917, they were moved to Bolshevik controlled Yekaterinburg in 1918, where they stayed at the Ipatiev House. The former tsar and tsaritsa and all of their family, including the gravely ill Alexei, along with several family servants, were executed by firing squad and bayonets in the basement of the Ipatiev House, early in the morning of 17 July 1918, by a detachment of Bolsheviks led by Yakov Yurovsky. Their remains which had been dismembered and disfigured with sulphuric acid were discovered in the 1990s, except two of the children, Anastasia or Marie and Alexei whose bodies were not discovered until 2007. The remains were identified by DNA analysis with a blood sample obtained from The Duke of Edinburgh which provided matching mitochondrial DNA. Alexandra, Nicholas and three daughters were reinterred in St Petersburg in 1998.

The Family of Queen Victoria PreviousNext Alfred, Duke of Edinburgh