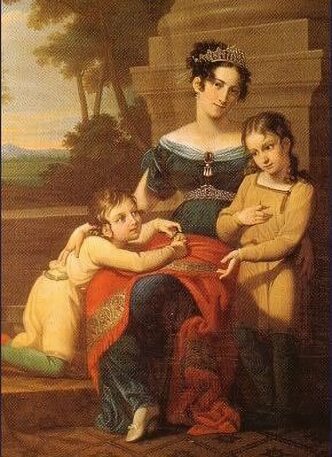 The marriage of Albert's parents was not a happy one and ended in separation and divorce. His mother was exiled from court in 1824, after which she married her lover, Alexander von Hanstein, Count of Polzig and Beiersdorf and was never saw her children, Albert and his elder brother Ernest again. Louise died of cancer at the age of thirty in 1831.

The following year, Duke Ernest married his niece, Princess Antoinette Marie of Württemberg. Albert and his brother were educated privately at home by Christoph Florschütz and later studied in Brussels. In common with many German princes, Albert attended the University of Bonn where he studied law, political economy, philosophy, and art history. 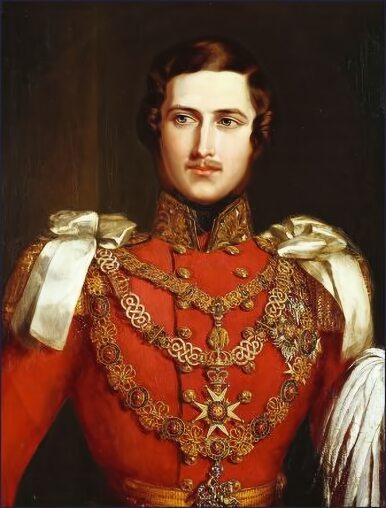 Albert's ambitious maternal uncle Leopold, once the husband of George Iv's ony daughter, the late Princess Charlotte of Wales had been King of the Belgians since 1831. Leopold dearly wished to expand Coburg influence by bringing about the marriage of Albert to his first cousin, Princess Victoria, heiress presumptive to the British throne. Victioria's mother, Victoria, Duchess of Kent, was the sister of both Albert's father, Ernest, Duke of Saxe-Coburg and Gotha and King Leopold. Her deceased father was Edward, Duke of Kent, fourth son of King George III.

Leopold made arrangements for his sister, Victoria's mother, to invite the Duke of Saxe-Coburg and Gotha and his two sons to visit her in May 1836, for the cousins to meet. King William IV, who heartily disliked his sister-in-law the Duchess of Kent, however, disapproved of a marriage between Victoria and a Coburg. Victoria liked her cousin Albert, confiding to her diary that her German cousin was 'extremely good looking'. Although no formal engagement was agreed on, as Victoria did not wish to be rushed into marriage. Victoria succeeded to the throne aged just eighteen on the death of her uncle William on 20 June 1837.

Albert returned to Britain with his brother Ernest on a second visit in October 1839. The couple felt mutual affection and, as protocol dictated, the Queen proposed to him on 15 October 1839. Before the marriage, Albert was naturalised by an Act of Parliament, and granted the style of Royal Highness by an Order in Council. The couple were married on 10 February 1840 at the Chapel Royal, St James's Palace. The newlyweds then set off to Windsor Castle for a three-day honeymoon.

Marrage of Victoria and Albert 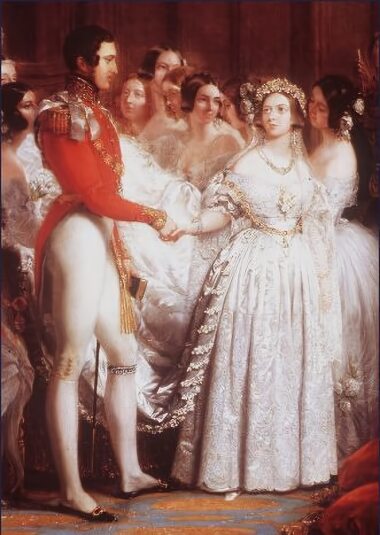 Initially, Albert was not popular with the British public; he was perceived to be from an impoverished and undistinguished minor state, Lord Melbourne, the then Prime Minister advised the Queen against granting her husband the title of "King Consort". It was not until 1857 that he was formally given the title of "Prince consort".

Albert's position in his marriage presented considerable difficulties; in his own words, "I am very happy and contented; but the difficulty in filling my place with the proper dignity is that I am only the husband, not the master in the house." The Queen's household was run by her former governess, Baroness Lehzen. Albert referred to her as the "House Dragon", and manoeuvred to dislodge the Baroness from her position. Victoria was reluctant to share power with her husband and it seemed that the only position she was prepared to allow him was that of blotting her signature on state papers. These teething troubles were eventually addressed when Albert, a highly intelligent young man, quickly mastered the English language and increased his influence in state affairs.

In June 1840, while undertaking a carriage drive, Albert and the pregnant Victoria were shot at by Edward Oxford, who was later judged to be insane. Neither Albert nor Victoria was injured and Albert was praised in the newspapers for his courage and coolness during the attack. Albert began to win public support as well as political influence and in August, Parliament passed the Regency Act 1840 to designate the prince as regent in the event of Victoria's death before their child reached the age of majority. Their first child, Victoria, was born in November. In early 1841, he successfully removed the nursery from Lehzen's control, and in September 1842, much to his relief, Lehzen left Britain permanently.

Eight other children were born to the couple over the next seventeen years. Four sons, Albert Edward, Prince of Wales born on 9 November 1841, Prince Alfred, Duke of Edinburgh and Saxe-Coburg-Gotha on 6 August 1844, Prince Arthur, Duke of Connaught and Strathearn on 1 May 1850 and Prince Leopold, Duke of Albany on 7 April 1853. The couple also had five daughters, Victoria, Princess Royal, Alice, Grand Duchess of Hesse, Princess Helena of Schleswig-Holstein, Princess Louise, Duchess of Argyll and finally Beatrice, Princess of Battenberg. Victoria and Albert lead an exemplary family life which regained the crown's respect after the scandalous behaviour of her uncles. Albert introduced many of the customs of his German homeland to Britain, perhaps the most famous of these being the Christmas tree.

After the 1841 general election, Melbourne was replaced as Prime Minister by Sir Robert Peel, who appointed Albert as chairman of the Royal Commission in charge of redecorating the new Palace of Westminster. By 1844, Albert had managed to modernise the royal finances and, through various economies, had sufficient capital to purchase Osborne House on the Isle of Wight as a private residence for their growing family. Over the next few years, a house modelled in the style of an Italianate villa was built to the designs of Albert and Thomas Cubitt. Albert laid out the grounds and improved the estate and farm. He managed and improved the other royal estates; his model farm at Windsor was admired by his biographers and under his stewardship the revenues of the Duchy of Cornwall-the hereditary property of the Prince of Wales, steadily increased.

Albert greatly liked Scotland, since the country reminded him of his German homeland. In 1852, Victoria and Albert acquired their Scottish retreat, Balmoral Castle with money left to her in the will of the wealthy and eccentric John Camden Nield. The couple were to visit their Scottish home every summer.

Unlike many landowners who approved of child labour and opposed Peel's repeal of the Corn Laws, Albert supported moves to raise working ages and free up trade. In 1846, Albert was rebuked by Lord George Bentinck when he attended the debate on the Corn Laws in the House of Commons to give tacit support to Peel. During Peel's premiership, Albert's authority behind, or beside, the throne became more apparent. He had access to all the Queen's papers, was drafting her correspondence and was present when she met her ministers, or even saw them alone in her absence.

Victoria and Albert and their nine childeren 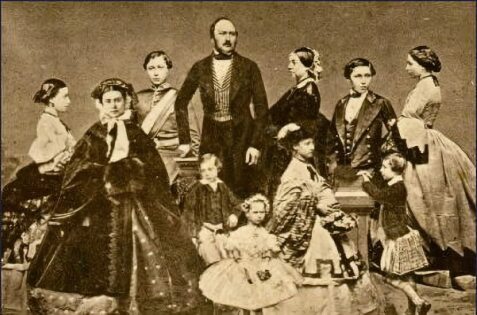 Albert took an active interest in the arts, science, trade and industry. He masterminded the Great Exhibition of 1851, to celebrate the great advances of the British industrial age and the expansion of the empire. He used the profits to help to establish the South Kensington museums complex in London. He arranged the marriage of his eldest daughter, Victoria, Princess Royal to Crown Prince Frederick William of Prussia (the future Kaiser Frederick III) to try to encourage the spread of liberalism in conservative, militant Prussia.

Victoria and Albert saw the birth of their first grandchild in 1857, when their daughter Vicky, who had married the heir to the Prussian throne, gave birth to the future Kaiser Wilhelm II. The labour had been difficult, resulting in the child being born with a damaged and withered arm. He was eventually to rule over a rival power and was to be ultimately responsible for the outbreak of the First World War, which shattered Albert's vision of world peace and free trade.

In the autumn of 1861, Albert intervened in a diplomatic row between Britain and the United States and his influence probably helped to avert war between the two countries. Albert was seriously ill with stomach cramps in August 1859. On a trip to his native Coburg in the autumn of 1860, he was driving alone in a carriage when the four horses suddenly bolted. As the horses continued to gallop toward a stationary wagon waiting at a railway crossing, Albert jumped for his life from the carriage. One of the horses was killed in the collision, and Albert was badly shaken, though his only physical injuries were cuts and bruises. He told his brother and eldest daughter that he sensed his time had come.

In March 1861, Victoria's mother the Duchess of Kent died and the queen was overcome by her was grief. Albert took on most of his wife's duties, despite being unwell himself with chronic stomach problems. Albert Edward, Prince of Wales, known as 'Bertie' was not turning out to be the prodigy that his father had ardently envisioned. While stationed at the Curragh, an army training camp in Ireland, he had indulged in a liaison with a young actress named Nellie Clifton. News of the affair was leaked to the newspapers which caused his father "the greatest pain I have ever yet felt in this life." Distraught over the matter and vastly overworked, Albert related it to the Queen, informing her she was not to hear "the disgusting details." The effect the incident had on Albert was catastrophic. He sent his son an extremely long letter on the subject. He went on to visit Bertie to further drive the message home. Bertie was reassuringly contrite, but Albert, distraught with sorrow, continued to worry and fret over the matter.

In the autumn of 1861, Albert intervened in a diplomatic row between Britain and the United States and his influence probably helped to avert war between the two countries. On 9 December, one of Albert's doctors, William Jenner, diagnosed him with typhoid fever. Albert died at 10:50 p.m. on 14 December 1861 in the Blue Room at Windsor Castle, in the presence of the Queen and five of their nine children.

The contemporary diagnosis was typhoid fever, but modern writers have pointed out that Albert was ill for at least two years before his death, which may indicate that a chronic disease, such as Crohn's disease, renal failure, or abdominal cancer, was the cause of death. Victoria was overwhelmed by grief and plunged into a prolonged period of mourning. The Blue Room at Windsor in which Prince Albert died remained unaltered for the rest of Victoria's life. She commissioned several monuments in his honour, including the Royal Albert Memorial in Kensington Gardens, completed in 1876.