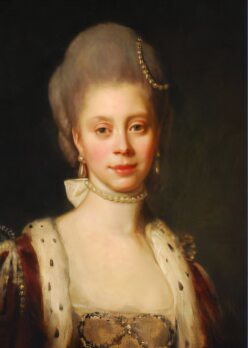 Although intelligent, Charlotte was reported to have received a very mediocre education, her father, Duke Charles, died when she was but eight years old and was succeeded as Duke of Mecklenburg-Strelitz by her half-brother Adolphus Frederick III.

The young King George III succeeded his grandfather George II to the throne of Great Britain at the age of 22. The seventeen-year-old German Princess of Mecklenburg-Strelitz appealed to him as a prospective bride partly because she had been brought up in an insignificant north German duchy and therefore would have had no experience of power politics or party intrigues. Charlotte spoke no English but was quick to learn the language, albeit she was noted to have spoken with a marked German accent.

Contemporaries commented that Charlotte was "ugly", she was small and thin, had a dark complexion and flared nostrils. Baron Stockmar, in his autobiography, described the Queen as having a "mulatto face".

The historian Mario de Valdes y Cocom argues that her features, as seen in royal portraits, were conspicuously African, and contends that they were noted by numerous contemporaries. He claims that Charlotte, though of German birth, was directly descended from a black branch of the Portuguese royal family, related to Margarita de Castro e Souza, a fifteenth-century Portuguese noblewoman nine generations removed, whose ancestry she traces from the thirteenth century ruler Alfonso III and his lover Madragana, whom Valdes states to have been a Moor and thus a black African.

According to Valdez, Queen Charlotte's apparent African features could have been inherited three to six times over from Margarita de Castro e Sousa, thus explaining the Queen's unmistakable African appearance. The Royal Household itself, at the time of Queen Elizabeth II's coronation, referred to both her Asian and African bloodlines in an apologia it published defending her position as head of the Commonwealth.

Princess Charlotte left her Mecklenburg eight days after her mother's death and arrived in England after a tempestuous Channel crossing, George III was said to be visibly disappointed at his first meeting with her at St. James' Palace in London, although they were later to form a strong and affectionate bond. The couple were married on September 8, 1761, at the Chapel Royal in St James’'s Palace.

Less than a year later, on 12 August 1762, Charlotte gave birth to her first child, George Augustus Frederick, Prince of Wales, later to become King George IV. A second child, Frederick Augustus, Duke of York and Albany was born in August of the following year, while a third son William Henry, Duke of Clarence, the future William IV was born on 21 August 1765. William was followed by the couple's first daughter, Charlotte Augusta Matilda, Princess Royal, destined to become Queen of Württemberg, who was born on 29 September 1766. In all the marriage produced fifteen children, nine sons and six daughters, all but two of whom (Octavius and Alfred) survived into adulthood. 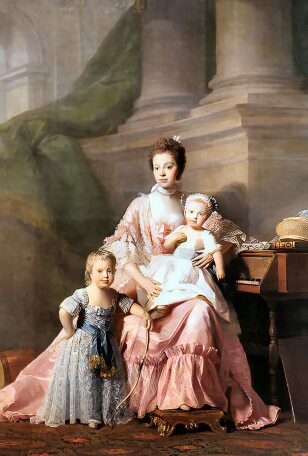 King George III was fond of country pursuits, riding and farming and preferred to live as much as possible outside of the capital in the then-rural towns of Kew and Richmond-upon-Thames. He favoured an informal and relaxed domestic life and a healthy diet, to the dismay of some courtiers more accustomed to displays of grandeur and strict protocol.

In 1761 the King bought Buckingham House (later Buckingham Palace) for his wife, as a comfortable family home close to St James's Palace. George and Charlotte were music connoisseurs with German tastes, who gave special honour to German artists and composers. They were passionate admirers of the music of George Frideric Handel.

Queen Charlotte was also a keen amateur botanist who took a great interest in Kew Gardens, and in an age of discovery, when travellers and explorers such as Captain Cook and Sir Joseph Banks were constantly bringing home new species and varieties of plants, saw that the collections were greatly enriched and expanded. Her interest in botany led to the magnificent South African flower, the Bird of Paradise, being named Strelitzia reginae in her honour. Queen Charlotte is also credited to have introduced the German tradition of Christmas trees to England and had the first one in 1800.

King George III succumbed to a bout of physical and mental illness in 1788, now believed to be porphyria, a metabolic condition, which greatly distressed the Queen. As the King gradually became permanently insane, the Queen's personality altered, she became bad tempered, sank into depression and gained weight, no longer enjoyed appearing in public and her relationships with her now adult children became strained. From 1792, she found some relief from her worry about her husband in throwing herself into the decorations and gardens of her new residence, Frogmore House, situated in Windsor Home Park.

After the onset of his madness, George was placed in his wife's care, while their eldest son, known as the Prince Regent, ruled in his father's stead. Charlotte could not bring herself to visit her afflicted husband very often, due to his erratic behaviour and occasional violent reactions. It is believed she did not visit him again after June 1812. However, she remained supportive of King George as his illness, worsened in old age. Charlotte was a fond grandmother of Princess Charlotte of Wales, the daughter of the Prince Regent and heir to the throne, it was a great blow to her when the younger Charlotte died in childbirth in November 1817.

A year after Princess Charlotte's death, Queen Charlotte fell ill and thought a few days in the country air of Kew would be beneficial, she was suffering from dropsy or fluid retention and her condition deteriorated until she contracted pneumonia. She died at the age of 74 at royal family's country retreat, Dutch House in Surrey (now known as Kew Palace) on 17 November 1818. Her two eldest sons, George, the Prince Regent, and Frederick, Duke of York, along with the Princesses Augusta and Mary were with her at the end. She was buried at St George's Chapel at Windsor Castle. Her husband, now completely blind and suffering from dementia, was not informed of her death, he died at the age of 81 at Windsor Castle, just over a year later.

(i) KING GEORGE V OF HANOVER

Caroline Matilda PreviousNext Porphyria in the House of Hanover