George II was born at Schloss Herrenhausen, Hanover, on 10th November 1683. He was to be the only son of George, Prince of Brunswick-Luneberg (later George I of Great Britain and his first cousin Sophia Dorothea of Celle.

Scandal engulfed the Hanoverian family when George's father divorced his tragic mother for adultery, after which he imprisoned her for life in the Castle of Ahlden. Sadly, the young George was never to see her again. George accompanied his father to England when he ascended the throne of Britain in 1714. Relations between father and son were always fractious, they avoided meeting whenever possible and the King at one time would not even allow his son and his wife to see their children, an act which was bitterly resented by his son and daughter-in-law. 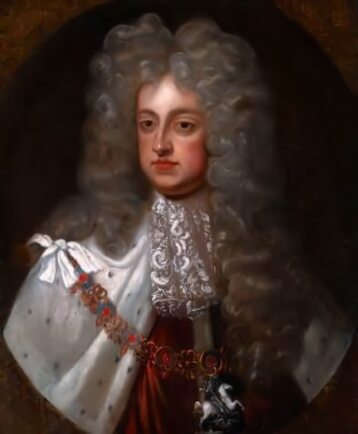 In acknowledgement of his place in the succession to the British throne, Queen Anne admitted Prince George into the Order of the Garter in 1706. The last Stuart monarch also created him Duke of Cambridge, Earl of Milford Haven, Viscount Northallerton and Baron Tewkesbury on 9 November of the same year. His father ascended the English throne on the death of Queen Anne in 1714 and George accompanied him to England. Never close, the pair became increasingly estranged, the new Prince of Wales did all in his power to encourage opposition to his father's policies, setting up home at Leicester House, in London, he made it a base for his father's opponents. Sir Robert Walpole managed to bring about a temporary reconciliation between father and son in 1720.

George II ascended the British throne on his detested father's death on 11 June 1727 and was crowned at Westminster Abbey. One of Georges's first acts as King was to make away with his father's will under the nose of the astonished Archbishop of Canterbury.

George II was not a particularly attractive character, he was prone to rages against anyone with whom he differed, in the course of which he kicked his coat and wig about. He was a tall man, with the Hanoverian bulging blue eyes, he was of limited intelligence who could be arrogant, vain and obstinate. He inherited his father's love of opera and patronized George Frederick Handel, who had been George I's court musician in Hanover. His interests included history and military memorabilia.

Robert Walpole succeeded in excluding Britain from continental conflicts for the first twelve years of the reign, but, against his minister's wishes, the king declared war on Spain in 1739. The Spanish war extended into the 1740s as a component of the War of Austrian Succession, in which England fought against French dominance in Europe. George was to gain the distinction of being the last British monarch to lead his troops into battle at the Battle of Dettingen on 16 June 1743, a highly significant victory for the British Army during the War of the Austrian Succession about which Handel composed his Dettingen Te Deum. In the 1750s war was again declared with France, and conflicts took place in Europe, North America and India. Government faltering in response to the French crisis brought William Pitt the Elder to the forefront of British politics. The reign was also marked by a substantial extension to the British Empire in India and North America.

George was married to Caroline of Anspach on 22 August 1705 at Hanover. Caroline too was German, born in 1683, she was the daughter of John Frederick, Margrave of Brandenburg-Anspach and Eleanore of Saxe-Eisenach. She was a self-opinionated young woman who had previously rejected a proposal of marriage from the King of Spain as she would not contemplate changing her Protestant religion.

Interested in politics, Caroline's considerable influence over George was exercised in favour of Sir Robert Walpole, When George travelled abroad the Queen was invariably appointed as regent. An intelligent and learned woman, she became a benefactress of Queen's College, Oxford. Hervey's memoirs recall:-" The queen loved reading, and the conversation of men of wit and learning. But she dared not indulge herself so much as she wished to do in this pleasure for fear of the king, who often rebuked her for dabbling in all that lettered nonsense, as he called it." Although George always had mistresses he became devoted to her. 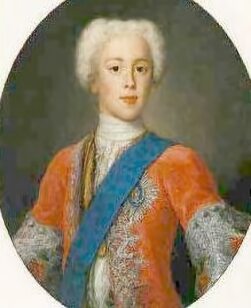 After a previous aborted mission, Charles Edward Stuart, the son of James Stuart, the Old Pretender, succeeded in landing in Scotland with a small band of followers and raised a further rebellion in the Jacobite bid for the the throne in 1745. Charles, better known to history as 'Bonnie Prince Charlie', raised his father's standard at Glenfinnan, where many of the Highland clans gathered to support his cause.

It was an impetuous enterprise, but the strong-headed young Charles was not one to listen to advice. The rebellion met with some initial success and won a battle against the government's forces at Preston pans on 21st September, after which the decision was reached to march into England. Having reached as far into England as Derby but not having acquired the level of support he had anticipated in the country, Charles was forced to reluctantly return to Scotland. 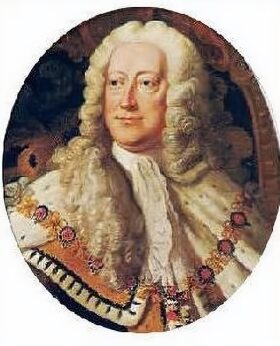 The rebel army was pursued north by government troops led by George II's younger son, the vastly obese William, Duke of Cumberland. At Battle of Culloden, on 16th April 1746, Charles' army of hungry and weary Highlanders was annihilated by Cumberland's army. Bonnie Prince Charlie himself fled the field and was to spend months hiding out in the Highlands waiting for a ship to take him to France. Cumberland then subdued the Highland Scots with such ferocity that his actions earned him the name of Butcher Cumberland.

The pattern of George's fractious relationship with his father was sadly echoed in that with his own eldest son, Frederick Prince of Wales. They mutually loathed each other. Queen Caroline equally strongly disliked her son, stating "My dear first born is the greatest ass, and the greatest liar, and the greatest canaille, and the greatest beast, in the whole world, and I most heartily wish he was out of it."

When Frederick died prematurely of a burst abscess on the lung, on 20th March 1751, George's grandson, also George, succeeded to his father's position as heir apparent. The Prince of Wales was buried on 13th April, at Westminster Abbey, the King did not attend the funeral and Frederick was largely unmourned by his parents. His son George was a likeable and good-natured youth whose relationship with his grandfather was not as difficult.

Following the birth of her last child, Princess Louisa, in 1724, the Queen developed a hernia, which went untreated. Eventually, in 1737, surgery became necessary. The operation was carried out without the use of anaesthetic, the queen was reported to have borne the pain bravely. Although the operation itself was successful, gangrene set in and as Queen Caroline lay dying, she urged her husband to marry again, he is said to have replied: "No, no!... I shall have mistresses instead". Queen Caroline died on 1 December 1737. George II who slept in a cot by her bed during her final illness was reported to be devastated at her loss.

By October 1760, George II was blind in one eye, and hard of hearing. He died on 25th October 1760, at the age of 76, of an aortic dissection, whilst using the toilet, at Kensington Palace. On the morning of 25 October, he rose as usual at 6:00 am and went to his close stool, alone. After a few minutes, his valet heard a loud crash. He entered the room to find the king on the floor. George was lifted into his bed, and Princess Amelia was sent for, but before she reached him, he was dead. A post-mortem revealed that the right ventricle of the king's heart had ruptured as the result of an incipient aortic aneurysm.

George was buried at Westminster beside his much-loved wife, Caroline of Anspach. He was succeeded by his grandson George III.