George Lewis, or George I as he was later known, was born in the German duchy of Brunswick-Luneberg in 1660, the year of the Restoration. He was the son of Ernest Augustus, Elector of Hanover and Sophia, the daughter of Elizabeth Stuart, the Winter Queen of Bohemia herself the daughter of the first Stuart King James I and VI. 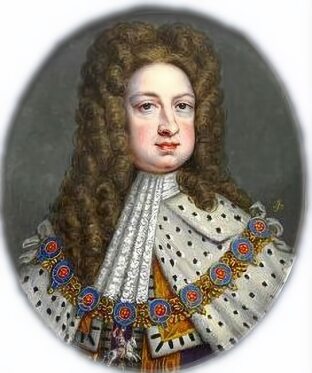 George's mother, Sophia of Hanover, was a cultured and intelligent woman who spoke five languages, an English visitor to Hanover described her as "a woman of incomparable knowledge in divinity, philosophy, history and the subjects of all sorts of books", she was also a lady of shrewd common sense and an even temperament. His father, Ernest Augustus, although possessing courage, was a man of limited mental capacity, who was cold and reserved and his main interests in life seemed to be the pursuit of horses and women. An uninspiring figure, George himself was described by one observer to be "low of stature, of features coarse, of aspect dull and placid." 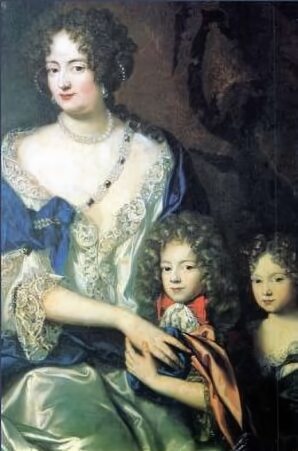 In 1680 he was invited over to England as a prospective suitor to James II's daughter, later to become Queen Anne. It seems that George Lewis, who history was to prove no gentleman, was unimpressed by the Princess and not keen to marry her, he returned to Hanover having failed to propose.

He was married in 1682 to his highly attractive first cousin, Sophia Dorothea of Celle, the daughter of George William, Duke of Brunswick-Luneberg and the French Huguenot Eleanor d' Olbreuze. The marriage led to the eventual unification of Hanover and Celle and produced two children, a son, named George Augustus, born on 10 November 1683 and a daughter, Sophia Dorothea, born on 16 March 1687, who was later to become Queen of Prussia.

George's wife Sophia Dorothea of Celle was a pretty and vivacious young woman, but her boorish husband ignored her, preferring to spend his time with his mistresses. She consequently embarked on an affair with the handsome and dashing Swedish Count Phillip von Konigsmark. Despite warnings to keep the liaison discreet, she foolishly flaunted her relationship with her lover, which quickly developed into a much discussed court scandal.

In 1694, Konigsmark disappeared at Herrenhausen, (suspected to have been murdered ) George proceeded to divorce Sophia Dorothea. The unfortunate woman was imprisoned at the Castle of Ahlden by her vindictive husband, she was twenty-eight years old at the time but was to spend the rest of her life there and tragically was never to see her two young children again. When George's father, Ernest Augustus died on 23 January 1698, he succeeded to the Duchy of Brunswick-Luneberg, which he reigned over as an absolute monarch and became an electoral prince of the Holy Roman Empire.

Shortly after, Queen Anne's only surviving child, William, Duke of Gloucester died, leaving George's mother, Sophia as the heiress to the throne of England through the 1701 Act of Settlement. There were many with a far superior hereditary right to England's throne, but they were passed over to maintain a Protestant succession. George was invested with the Order of the Garter by Queen Anne in recognition of his place in the English Succession. During the War of the Spanish Succession (1701-14) George had fought with distinction against the French and English Whig politicians began to court his favour.

Sophia of Hanover, who claimed her dearest wish was to have Sophia, Queen of Great Britain engraved on her tombstone, narrowly missed her life's ambition, she died aged eighty-four, only two months before Queen Anne. In 1714, on the death of Anne, the last Stuart monarch, George, at the age of 54, came to England to accept "the throne of our ancestors" as he referred to it in his first speech to Parliament. 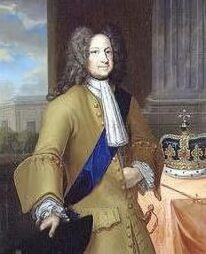 George was the senior Protestant descendant of James I, but there were other relatives who had a better claim to the throne who were debarred because they were Catholics. The first of these was James Francis Edward, the son of James II and half-brother of Queen Anne, but others possessed a superior hereditary right to the throne. Charles I's youngest daughter, Henriette Anne, had married Philippe, Duke of Orléans and converted to Catholicism. Henrietta had four children, only one of whom was still alive in 1714, Anne Marie d'Orleans, who had married Victor Amadeus of Savoy. Anne Marie had two sons, Charles Emmanuel and Victor Amadeus and two daughters Marie Adélaïde of Savoy who had married Louis, Duke of Burgundy, Dauphin of France and Maria Luisa of Savoy, the wife of Philip V of Spain. George I's grandmother, Elizabeth Queen of Bohemia was the only surviving daughter of James I, she gave birth to thirteen children but only three of these had legitimate issue. Her son Charles I Louis had a daughter Elizabeth Charlotte, Princess of the Palatinate, who became the second wife of Philippe, Duke of Orléans. She had two surviving children, Philippe II, Duke of Orléans and Élisabeth Charlotte d'Orléans. Edward, Count Palatine of Simmern, also the older brother of Sopha of Hanover and George's uncle became a Catholic and had two daughters, Anne Henrietta and Benedicta, all of these were alive in 1714 when George ascended the British throne.

The English were singularly unimpressed with their new sovereign. George I was a short, irascible German who failed to even speak English and could not be bothered to learn the language. Landing in England at Greenwich, on the evening of 18th September, 1714, in a thick fog, he was accompanied two mistresses Mademoiselle Schullenberg and Madame Keilmansegge, The pair were irreverently dubbed the "the Elephant and the Maypole." His coronation took place at Westminster Abbey on 20 October.

Although the majority of the British people were Protestant and therefore approved of the Act of Settlement and the rule of the German George, as an alternative to the return of the Pretender and the Pope, a minority still preferred to the cause of the Jacobites in the person of James II's staunchly Catholic son James Francis Edward Stuart, a half-brother of the late Queen Anne, at the time, exiled on the continent and eagerly waiting his chance to claim what he saw as his inheritance. James had gained some support from the Tory party.

In 1715, the Jacobites raised the standard of 'James III' in Scotland. The Battle of Sherrifmuir was fought but turned out to be inconclusive. A small Jacobite force ventured into England but was defeated at Preston. The revolt was all but over when James Francis Edward at last arrived, a reserved young man, the Scots were uninspired by his leadership, and in 1716, having achieved nothing, he returned to France. Jacobites who were captured during the uprising were put on trial for treason and sentenced to death. In July 1717, the Indemnity Act had pardoned all who had participated in the rebellion, with the exception of the Clan Gregor, one of those who not pardoned was the famous Rob Roy MacGregor.

The Jacobites found a new ally in Spain's Minister to the King, Cardinal Giulio Alberoni. An invasion was launched in 1719 which planned to raise the clans after landing in Scotland. Their ships were dispersed by storms before they could land. When two Spanish ships landed they were met by a party of Jacobites led by Lord Tullibardine and Earl Marischal at Loch Duich held Eilean Donan Castle but this was soon taken and destroyed by a Royal Naval reconnaissance force. At the Battle of Glen Shiel, the Spanish soldiers were forced to surrender to government forces.

George's relationship with his only son, the Prince of Wales, which was never good, continued to deteriorate. George Augustus encouraged political opposition to his father's policies. On the birth of the Prince of Wales son, William, in 1717 a major rift developed between them. The King appointed the Duke of Newcastle, the Lord Chamberlain, as one of the child's sponsors. The Prince, who had not been consulted and heartily disliked Newcastle proceeded to insult him at the christening, thereby angering his father. The Prince of Wales was promptly ordered to leave St. James's Palace and set up home at Leicester House, with the Princess of Wales. They were not allowed to take their children, who remained in the care of the king, an action that was naturally deeply resented by the Prince and his wife. Leicester House which then became a meeting place for the King's political opponents. Sir Robert Walpole managed to bring about a temporary reconciliation between father and son in 1720, but they remained largely estranged. 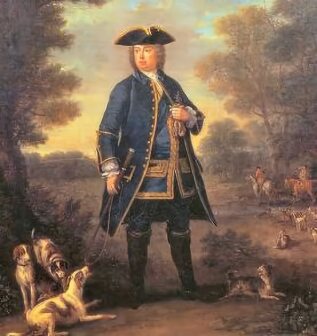 In the early part of his reign, George I attended meetings of the cabinet regularly. Though he was somewhat hampered by his inability to speak English, his son George, the new Prince of Wales, translated for him. Establishing a much-repeated Hanoverian tradition, the King had a poor relationship with his eldest son. George ceased to attend meetings of the cabinet and Robert Walpole took advantage of his absence to establish his own power. George seemed content to leave the business of ruling England to Walpole while he ruled as a despot in Hanover.

Walpole was born in 1676, the son of a West Norfolk landowner and entered Parliament as a member of the Whig party in 1701. He rose to prominence rapidly becoming First Lord of the Treasury and Chancellor of the Exchequer in 1715.

Walpole's position was threatened in 1727 by the death of George I and the succession of George II. For a few days it seemed that he would be dismissed but, on the advice of his spouse, Queen Caroline, the King agreed to retain him in office. He died in 1745.

A company was set up to trade with the South Seas in 1711, into which thousands invested their savings. In 1720 most of those who had invested heavily in the scheme lost their money and were ruined. In the ensuing scandal, it became increasingly clear that George and his mistresses had taken part in South Sea Company transactions of questionable legality, but Walpole's skill in handling the House of Commons saved the king from disgrace.

George, I famously said " I hate all boets and bainters " Apart from his patronage of Handel, the King did not appreciate the arts. Nevertheless, his reign saw some literary achievements. Robinson Crusoe by Daniel Defoe was published in 1719 and Jonathon Swift's Gulliver's Travels in 1726, in the same year the first circulating library in Britain was opened in Edinburgh.

George's unfortunate ex-wife, Sophia Dorothea, having spent thirty-two years, more than half of her life, as the Prisoner of Ahlden died of liver failure at the German castle on 23 November 1726. Before her death she is said to have written a letter to George, cursing him from beyond the grave. George refused to allow mourning in Hanover or England and was infuriated when he heard that his daughter Sophia's Prussian court had decided to wear black in her honour. Sophia Dorothea had inherited her mother's property in 1722 upon Eleanore's death and left it in her will to her children, but George destroyed the will and appropriated her property for himself.

The King's relationship with his eldest son and heir George, Prince of Wales, remained hostile, an icy coldness existed between the pair. Walpole formed a friendship with Caroline of Anspach, the Princess of Wales. Unlike her spouse, she was possessed of some intelligence and through her influence, the Prime Minister gained the Prince of Wales' trust. He managed to bring about the impossible and engineered a reconciliation between George and his son, it proved however to be a superficial one.

During one of his frequent visits to his beloved Hanover, George I suffered a stroke on the road between Delden and Nordhorn and died at the Bishop's Palace at Osnabruck on 11th June 1727, in his sixty-seventh year, he was buried in the Chapel of the Leine Schloss. He was succeeded by his son George II. After the Second World War the body of George I was transferred to the Chapel vaults at Schloss Herrenhausen.