Elizabeth Stuart, the eldest and only surviving daughter of James I and VI and his wife Anne of Demark was born at 2 o'clock in the morning of 19 August 1596 at Dunfermline Palace in Fife.

At the time of Elizabeth's birth, her father was King James VI of Scotland and had not yet inherited the English throne. The new princess was christened on 28 November 1596 in the Chapel Royal at Holyroodhouse, she was named in honour of James' cousin Queen Elizabeth I of England who was her godmother. She was brought up at Linlithgow Palace, where she was placed in the care of Lord Livingstone. 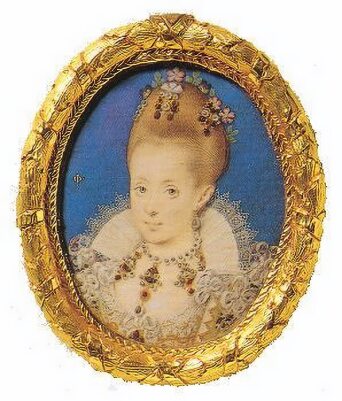 On the death of Queen Elizabeth I in 1603, King James succeeded to the English throne. Elizabeth, then aged 7, travelled south along with her mother and elder brother Henry, to join King James in England. Elizabeth remained at court for but a few weeks and there is no evidence that she was present at her parents' coronation. The royal children lived mainly at Oatlands, an old Tudor hunting lodge near Weybridge and at at Coombe Abbey in Warwickshire. The Gunpowder Plot of 1605 was intended to assassinate King James I and the Protestant aristocracy, kidnap the nine-year-old Elizabeth from Coombe Abbey, and place her on the throne as a Catholic monarch.

Elizabeth seems to have been an intelligent child, she received an excellent education which included natural history, geography, theology, languages, writing, history, music and dancing. By the age of twelve, Elizabeth was reported to be fluent in several languages, including French. She also displayed an aptitude for writing letters that "sounded sincere and never stilted". She was also extremely literary and several mementoes of her early love of books exist.

A marriage was arranged for Elizabeth with Frederick V, Count Palatine of the Rhine, "a senior Prince of the Empire" and a staunch defender of the Protestant faith. Frederick arrived in England on 16 October 1612 to meet his future wife. The couple met for the first time in Whitehall Palace in London, contemporaries record how Frederick seemed to "delight in nothing but her company and conversation". He also became friends with Elizabeth's eldest brother, Prince Henry, now Prince of Wales. On 6 November 1612, tragically Henry, Prince of Wales, died from typhoid fever at the age of 18. The siblings had been close and his death took an emotional toll on Elizabeth. 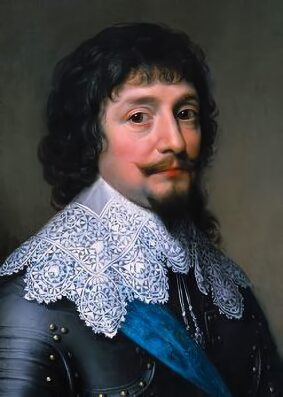 Elizabeth's wedding took place on 14 February 1613 at the royal chapel at the Palace of Whitehall, the couple were both aged 16, the bride was dressed in cloth of silver lined with taffeta, with a crown "of immense value" on her head, an enormously popular match, it proved to be an occasion for an outpouring of public affection. After remaining in London for almost two months, the newly weds travelled to the Electoral court in Heidelberg. The marriage was to produce 13 children:-

On 26 August 1619, Frederick was elected as King of Bohemia, initially, he was uncertain as to whether he should accept, but under persuasion from Elizabeth he finally agreed to and the family moved to Prague. Frederick was crowned King of Bohemia on 4 November 1619 with Elizabeth being crowned Queen three days later. Frederick's reign in Bohemia got off to a good start, the Bohemian crown, however, had always been a corner-stone of Hapsburg policy and the Holy Roman Emperor Ferdinand II was loathe to give it up. Frederick's rule in Bohemia proved to be brief, as Ferdinand's forces routed him at the Battle of White Mountain on 8 November 1620, thus starting the Thirty Years' War across much of Northern and Central Europe. This led to Elizabeth being referred to as the "Winter Queen". 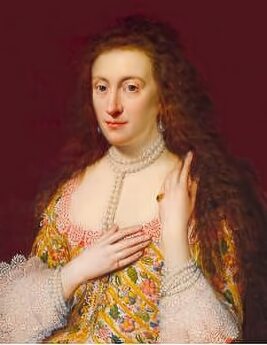 The family were forced to flee, the Palatinate was now occupied by the Catholic League and a Spanish contingent, which led to their taking up residence at the Hague, as the guests of the Prince of Orange. Frederick later met King King Gustavus Adolphus at Frankfurt, in an attempt to restore him to the Swedish throne, he participated in Gustavus Adolphus' march into the Duchy of Bavaria, and was present for the march into Munich on 17 May 1632. On his return journey to the Hague, suffering from an infection, Frederick died of a "pestilential fever" on the morning of 29 November 1632.

Elizabeth, devastated on hearing the news of her husband's death, became senseless with grief and for three days was reported to be unable to eat, drink or sleep. When her brother, now King Charles I heard of her sad plight he invited her to return to England, she turned his offer down, preferring to remain and push the rights of her son and Frederick's heir Charles Louis. Charles Louis regained the Electorate of the Palatinate in 1648, but Elizabeth remained in exile in The Hague.

Elizabeth finally returned to England on 26 May 1661 to visit her nephew Charles II who had recently been restored to the English throne following the death of Lord Protector Oliver Cromwell. She initially planned to return to the Hague after her visit, but by July she seemed to have dropped her plans to return and made arrangements for the remainder of her furniture, clothing and other property to be sent to her. She established her household at Drury House in London and on 29 January moved to Leicester House, but by this time her health had taken a turn for the worse. Suffering from pneumonia, on 10 February 1662, she haemorrhaged from the lungs and died soon after midnight on 13 February 1662.

Elizabeth "a survivor of an earlier age, isolated and without a country she could really call her own". was buried in the Henry VII Chapel at Westminster Abbey, close to her brother Henry, Prince of Wales.

On the death of the last Stuart monarch Queen Anne in 1714, Elizabeth's German grandson, George, Elector of Hanover, the son of her youngest daughter Sophia, Electress of Hanover ascended the thrones of England, Scotland and Ireland as George I.