The charismatic Henry Frederick Stuart was born at Stirling Castle on 19 February 1594, the firstborn child of James VI of Scotland (later I of England) and Anne of Denmark. He was named in honour of his two grandfathers, Henry Stuart, Lord Darnley and Frederick II of Denmark. He became Duke of Rothesay, Earl of Carrick, Baron of Renfrew, Lord of the Isles and Prince and Great Steward of Scotland at birth. 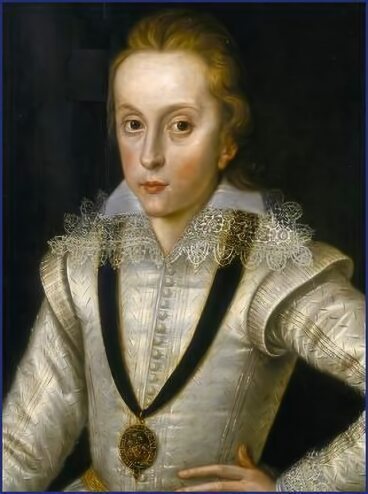 The young prince was placed in the care of John Erskine, Earl of Mar, as his father was concerned that his wife Anne of Denmark's leanings toward Catholicism might affect her son, which understandably led to tension between his parents.

Henry's siblings, Elizabeth Stuart born at Falkland Palace, Fife, in 1596 and later became Queen of Bohemia and Charles ( the future Charles I ) born in Dunfermline Palace 19 November 1600, were also removed from their mother’s care by James at a young age. Charles was at first a sickly child and it was not thought likely that he would survive. A sister, Margaret was born on 24 December 1598, but died in 1600 and a further brother, Robert, Duke of Kintyre, was born on 18 January 1602, but died in May of that year. Henry was to remain in the care of the Earl of Mar until in 1603, James VI of Scotland became King of England and the family moved south, with the exception of Charles, who was not considered strong enough to make the journey to London. He was reunited with the rest of his family when he was three and a half and could walk unaided.

Two further siblings were born after the family moved to England, Mary Stuart was born 8 April 1605 but died of pneumonia at 17 months old in September 1607 and was buried at Westminster Abbey. James and Anne's final child, Sophia Stuart, named for Anne's mother, Sophia of Mecklenburg-Güstrow, was born on 22 June 1606 but lived only a day.

In 1605, Henry entered Magdalen College, Oxford, he did not always see eye to eye with his father, disapproved of his father's pleasure-loving court and the royal favourite Robert Carr, whom he actively disliked, he was also against the imprisonment of Sir Walter Ralegh in the Tower of London, whom he held in great esteem. Henry became automatically Duke of Cornwall on his father's accession to the English throne and was invested Prince of Wales and Earl of Chester in 1610.

As a young man, the would-be King Henry IX showed great promise and was intelligent and athletic. Described as an "obdurate Protestant", when his father proposed a French marriage, he replied that he was 'resolved that two religions should not lie in his bed. “He was tall and of a high stature, his body strong and well-proportioned,” recorded William Hayden, groom of the bed-chamber, “the colour of his face somewhat swart and scorched with the sun, his whole face and visage comely and beautiful, looking for the most part with a sweet, smiling, and amiable countenance, and with full of gravity…” 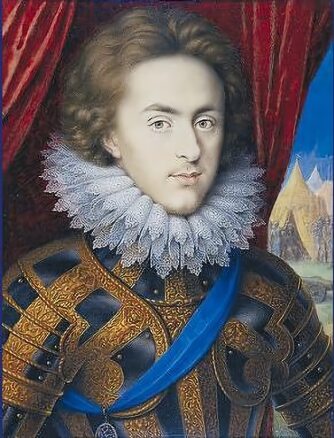 Prince Henry was extremely popular in England and often eclipsed his father, for whom the same could not be said. Relations between father and son were often tense, on one occasion, whilst they were hunting near Royston, James was heard to criticize Henry for lacking enthusiasm for the chase, Henry initially moved to strike his father with a cane but thought better of it and rode off, most of the hunting party then followed him.

Henry often teased his nine-year-old younger brother Charles, Duke of York, snatching the hat of a bishop, he placed it on Charles' head, then informed him that when he became king he would make Charles Archbishop of Canterbury, so Charles would have a long robe to hide his rickety legs. The frustrated Charles stamped on the hat and was taken away in tears.

In common with his brother Charles, Henry was a keen collector of paintings, sculpture and books, at the age of 16, he had already built up an art collection, which included drawings by Holbein, which are now housed in the Windsor Castle library. He also enjoyed music and literature and had an interest in architecture.

Henry Stuart died from typhoid fever at the age of 18, though at the time there were rumours of poisoning, the diagnosis can be made with reasonable certainty from written records of the post-mortem examination. Prince Henry's early death was widely regarded as a tragedy for the nation. Charles Carlton related that "Few heirs to the English throne have been as widely and deeply mourned as Prince Henry."

On 7 December, over a thousand people walked in the mile-long cortege to Westminster Abbey to hear the two-hour sermon delivered by the Archbishop of Canterbury. Prince Charles, the new heir to the throne, fell ill after Henry's death, but attended the funeral as chief mourner, James I, who detesting funerals, refused to attend.