Anne of Denmark was born on 12 December 1574 at the castle of Skanderborg on the Jutland Peninsula in Denmark, the second daughter of King Frederick II of Denmark and Sophie of Mecklenburg-Güstrow.

Along with her older sister, Elizabeth, Anne spent her early years at Güstrow in Germany with her maternal grandparents, Duke Ulrich and Duchess Elizabeth of Mecklenburg, who had herself been a Princess of Denmark, but in 1579, Anne returned to the Danish court. She experienced a happy childhood in Denmark. Suitors from all over Europe sought the hands of the two Danish princesses in marriage, including King James VI of Scotland. Scottish ambassadors dispatched to the Danish court had at first centred their attentions on the elder sister, Elizabeth, as a future spouse to their king, but Elizabeth was eventually betrothed to Henry Julius, Duke of Brunswick, the Danes then promised the Scots that their king should have the younger daughter Anne. Anne of Denmark 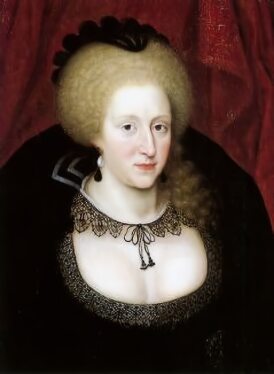 On 20 August 1589, the fourteen year old Anne and James were married by proxy at Kronborg Castle. Anne sailed for Scotland within 10 days of the proxy marriage, but was stranded in Norway by a violent storm. Lord Dingwall landed at Leith on 12 September, with news of the new Queen's misfortune. Alarmed, James called for national fasting and public prayers and sent a search party out for his bride. Informed in October that she had abandoned the crossing for the winter, James set sail from Leith with a large retinue to fetch his wife personally, arriving in Oslo on 19 November. He is reported to have presented himself to Anne, "with boots and all", and, disarming her protests, gave her a kiss in the Scottish fashion.

The couple were formally married at the Old Bishop's Palace in Oslo on 23 November 1589, the ceremony was conducted in French, so that both parties could understand. A month of celebrations followed the wedding after which James visited his new relations at Kronborg Castle in Elsinore, where the newlyweds were greeted by Queen Sophie and the twelve-year-old King Christian IV. The couple later sailed for Scotland, arriving in the Water of Leith on 1 May 1590.

Anne was very tall, taller than her husband, had blonde hair, blue eyes and a very fair complexion, but irregular features. James was at first infatuated by his bride, but later the couple often disagreed, though, in the early years of their marriage, James seems always to have treated Anne with patience and affection. Although Anne had been brought up in the Lutheran religion, she converted to Roman Catholicism during the 1590s. In Basilikon Doron, written 1597-1598, James described marriage as "the greatest earthly felicitie or miserie, that can come to a man."

James I and VI 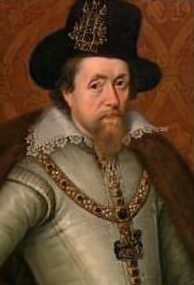 Despite James' homo-sexual tendencies, Anne gave birth to their first child, Henry Frederick Stuart on 19 February 1594. She was given no say in the care and upbringing of her son who on James insistence, was placed in the custody of John Erskine, Earl of Mar at Stirling Castle. Distressed at this situation she mounted a campaign for custody of her son, which James resisted, leading to further friction betwen the couple. Prince Henry was followed by a daughter, Elizabeth Stuart in 1596, then Margaret in 1598, who died at fourteen months old, a second son, Charles, later Duke of York (and Charles I), was born at Dunfermline in 1600, Charles was at first a sickly child and it was not thought likely that he would survive. Then came Robert, Duke of Kyntyre, born in 1601, who died at the age of four months.

Anne recognised an opportunity to obtain custody of Prince Henry in 1603 when James travelled to London with the Earl of Mar to assume the English throne following the death of Elizabeth I. Although pregnant at the time, Anne travelled to Stirling with a force of "well-supported" nobles, intent on removing the nine-year-old Henry, whom she had hardly seen for five years, but to her chagrin, Mar's mother and brother would allow her to bring no more than two attendants with her into the castle. She later suffered a miscarriage. When James informed her by letter that she was to join him in England, she refused to do so unless allowed custody of Henry and James was forced into submission on the matter. After a brief convalescence from her miscarriage, Anne duly travelled south with Prince Henry.

Anne moved into Greenwich Palace and then Somerset House, which she renamed Denmark House. Anne gave birth to a daughter, Mary in 1605 and later her last-child, Sophia in 1607, both these children failed to survive to adulthood, Mary died at two years and Sophia at a day old. Mary and Sophia are buried at Westminster Abbey. The infant mortality rate was high in the seventeenth century, a fact of life that not even royalty could elude. After narrowly surviving the birth and death of her last child, Sophia, in 1607, Anne's decision to have no more children resulted in widening the gulf between the couple. After 1607, she and James rarely lived together. Anne acquired a taste for expensive clothing and jewellery, and costly building projects, which all added to the financial difficulties of James' reign. The death of Prince Henry in 1612 at the age of eighteen and the departure of the sixteen-year-old Princess Elizabeth in April 1613, after marrying Elector Frederick V of the Palatine, further weakened the ties that bound them.

The bi-sexual James had always adopted male favourites, he later began to encourage them to play a role in the government. Queen Anne detested Robert Carr, Earl of Somerset, but she encouraged the rise of George Villiers, Duke of Buckingham, whom James knighted in her bed-chamber and she developed friendly relations with him, calling him her "dog". Anne, however, found herself increasingly ignored after Buckingham's rise and became a lonely figure towards the end of her life. Queen Anne shared James' extravagance, she adored dancing and pageants and became an enthusiastic playgoer, and sponsored lavish masques. She performed with the ladies of her court in several masques written by Ben Jonson, including 'The Masque of Beauty'.

By late 1617, Anne was in failing health and began to suffer bouts of illness, John Chamberlain recorded that "The Queen continues still ill disposed and though she would fain lay all her infirmities upon the gout yet most of her physicians fear a further inconvenience of an ill habit or disposition through her whole body." James visited Anne only three times during her last illness, though her younger son Prince Charles often slept in the adjoining bedroom at Hampton Court Palace and was at her bedside during her last hours, when she had lost her sight. Queen Anne died aged 44 on 2 March 1619, of a dangerous form of dropsy. An inquest discovered Anne to be "much wasted within, specially her liver".

James did not attend his wife's funeral, claiming illness, his symptoms, according to Sir Theodore de Mayerne, included "fainting, sighing, dread, incredible sadness..." Anne was buried in the south aisle of the Henry VII Chapel, Westminster Abbey, on 13 May 1619. The catafalque, designed by Maximilian Colt, which was placed over her grave was destroyed during the civil war in the reign of her son, Charles I.

The family of James I and Anne of Denmark 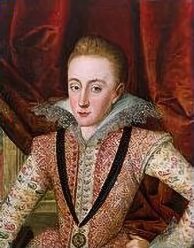 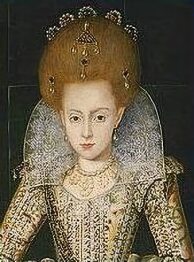 Margaret died at the age of 2 and was buried at Holyrood Abbey, 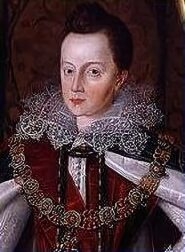 Robert died at the age of 4 months and was buried at Dunfermline Palace, Fife, Scotland

Sophia lived only a day and was buried at Westminster Abbey