The story of Caroline Matilda, Princess of Great Britain, echoes in many ways that of her great grandmother, the tragic Sophia Dorothea of Celle. Caroline Matilda, the ninth and youngest child of Frederick, Prince of Wales, and Princess Augusta of Saxe-Gotha was born at Leicester House in London on 11 July, 1751. 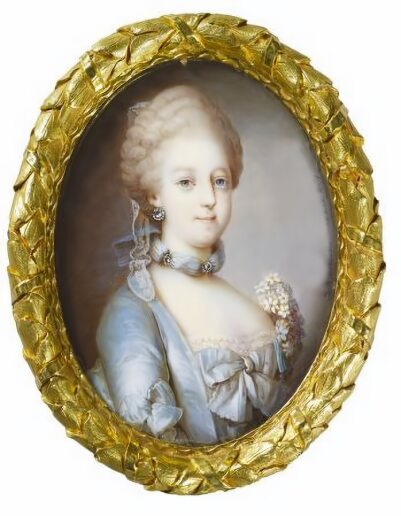 Caroline's father the Prince of Wales had died suddenly from a burst abscess in the lung, about three months prior to her birth. Caroline Matilda was brought up by her mother at Kew and Leicester House, away from the English court. She enjoyed outdoor life and riding and grew to be an attractive young woman who could speak Italian, French and German, and was said to be an accomplished singer with a beautiful voice.

A marriage was arranged for Caroline Matilda with her first cousin, King Christian VII of Denmark, the son of Frederick V of Denmark and Princess Louisa of Great Britain and Hanover, who was a daughter of King George II. The royal couple were married by proxy in October of 1766 at St James's, Caroline was sent to Denmark, where they were married in person on 8 November 1766 at Christiansborg Palace in Copenhagen. The bride was aged fifteen and the groom seventeen, he had been the king of Denmark for six months.

Caroline Matilda's new husband was said to be mentally unstable, Christian had exhibited strange symptoms even as a child. He was insecure and had feelings of inadequacy, at times he was known to become frantic and his education was completely neglected. His chamberlain, Detlev Reventlow, was a stern man who terrorised the boy with severe beatings. After a beating, Christian would lie on the floor foaming at the mouth. 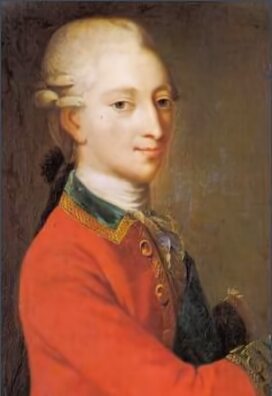 Finding herself alone at a strange court, the Dowager Queen Juliane Marie did nothing to help the lonely young girl and instead discouraged the other ladies of the court to be openly friendly to her. Caroline Matilda's vivacious and unaffected personality was not particularly popular at the strict court of Denmark. She became close to her lady-in-waiting, Louise von Plessen, who regarded the king's friends as immoral and acted to isolate Caroline Matilda from her husband.

Although her husband was said not to like her and was rumoured to be homosexual, the marriage produced a son, the crown prince Frederick, destined to become the future Frederick VI of Denmark (1768-1839).

After the birth of their son, Christian VII began an affair with the courtesan Støvlet-Cathrine, with whom he visited the brothels of Copenhagen. The unhappy Caroline Matilda felt neglected and spurned by her husband. Louise von Plessen was exiled from court in 1768, and Caroline lost her closest confidante, leading her to feel even more isolated at the Danish court. In May 1768 Christian VII embarked on a long tour of Europe, while he was away, Caroline Matilda aroused attention when she took walks in Copenhagen, which was considered scandalous at the time, as royal and noble Danish women normally only travelled by carriage in town. Caroline Matilda spent the summer at Frederiksborg Castle with her new child before returning to Copenhagen in the autumn.

The king returned to Copenhagen on 12 January 1769, accompanied by the German Johann Friedrich Struensee, the new royal physician. He had met Struensee in Altona while touring Europe. He could manage the king's instability and Christian had confidence in him. The Queen initially disliked the new physician, but when an outbreak of smallpox threatened Copenhagen, Struensee successfully vaccinated her son Prince Frederick against the disease, and Caroline Matilda then began to warm to him. As a gesture of gratitude Caroline appointed Struensee her secretary. 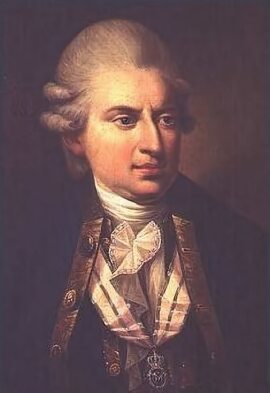 The thirty-year-old Struensee was a tall and handsome man who had a calming effect on the young king, mixing up hangover remedies, coaxing him to take an interest in his paperwork. His prescribed of plenty of fresh air, exercise, and cutting back on the drinking which began to have a beneficial effect on Christian, he also attempted to encourage the king to improve his relationship with his neglected wife, and Christian duly arranged a three-day birthday party for her on 22 July 1769. Struensee was given his bedroom in the palace, and by the spring of 1770 had become the lover of the Queen.

By 1770, the king's mental health, which had never been stable, began to deteriorate further; displaying symptoms of paranoia, self-mutilation and hallucinations. He was often found in the morning sitting in the corner of his room with a distressed expression on his face. Sometimes he would beat his head against the wall until blood flowed. Occasionally, he attacked his entourage violently or laughed inappropriately and wildly.

Caroline Matilda, who had been largely ignored until that time, gathered followers and a 'Queen's Party' began to form, She gained new confidence and showed herself in public on horseback dressed as a man. Supported by his lover, Struensee ruled through the king. On 15 September 1770, the King dismissed Bernstorff, and two days later Struensee was appointed privy councillor. During the year, the king sank into a condition of mental torpor, Struensee held absolute power for ten months, between 20 March 1771 and 16 January 1772.

Struensee's relations with the queen were offensive to a nation that had long held the royal House of Oldenburg in veneration, while her conduct in public brought the Crown into contempt. Her habit of riding in public dressed as a man was seen as shocking. The affair alienated the clergy and the Danish nobility, who took their complaints to King Christian's stepmother, the Dowager Queen Juliana, hoped that if she could succeed in getting rid of Caroline Matilda would rule as regent until the young Prince Frederick came of age. 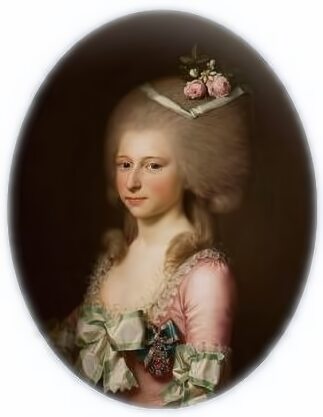 On 17 June 1771, the Queen took up summer residence at Hirschholm Palace, on an island not far from Copenhagen, where she lived with her child and her lover Struensee. On 7 July 1771, Caroline Matilda gave birth to her second child, Princess Louise Auguste, whose father was almost certainly Struensee. Although officially accepted as a Princess of Denmark, no one was fooled as to the true identity of the new princess' father and the child was secretly referred to as "la petite Struensee".

The Queen's enemies were now armed with enough evidence of her affair to strike. Following a masked ball at the royal theatre at Christiansborg Castle, Struensee and Caroline Matilda were arrested in the middle of the night between 16 and 17 January. Caroline Matilda was taken to Kronborg Castle, she was allowed to keep her daughter with her, but the four-year-old Crown Prince Frederik remained with his father. She was not provided with advisers, and initially denied her relationship with Struensee, Struensee, meanwhile was subjected to torture, he confessed to being the Queen's lover after being informed that Caroline Matilda had been arrested and confessed. The Queen herself is said to have been manipulated to admit the relationship, she signed a confession hoping that Struensee's life might thereby be spared.

The marriage of Caroline Matilda and Christian VII was dissolved by divorce in April 1772. Following the divorce, Johann Friedrich Struensee and his accomplice Count Enevold Brandt were executed on 28 April 1772, while Caroline Matilda was imprisoned at Elsinore.

The Queen's older brother, King George III, sent a British diplomat, Sir Robert Murray Keith, to negotiate his sister's release from imprisonment. On 28 May 1772, Caroline Matilda was deported on board a British frigate. George III, dismayed at her behaviour, did not receive her at the English court as he thought his sister's conduct had hastened their mother's recent death but sent her to Celle, where she resided at Celle Castle in Hanover.

In Celle, she was reunited with her friend and lady-in-waiting Louise von Plessen and became known for her charity toward poor children and orphans. In 1774 she entered into a plot to be re-instated as her son's guardian and wrote to her brother, King George III to ask for his support. She was never to see her children again. Caroline Matilda died of scarlet fever at Celle at the age of twenty-three, on 10 May 1775. She was buried in the Stadtkirche St. Marien in Celle.