Robert II, the first monarch of the House of Stewart, was born on 2nd March, 1316 at Paisley Abbey, the son of Robert the Bruce's daughter Marjorie Bruce and Walter, 6th High Steward of Scotland. He was delivered by caesarean section, the heavily pregnant Marjorie Bruce had been riding in Gallowhill, Paisley, Renfrewshire when her horse was suddenly startled and threw her to the ground at a place called 'The Knock.' Marjorie was seriously injured, her fall caused a dislocation of her neck bone. She went into premature labour his mother failed to survive the ordeal of a cesarean section, dying a few hours later.

The office of High Steward was hereditary and had been held by Walter's family for generations. Originally the FitzAlans, of Breton descent, the family had arrived in Scotland in the twelfth century. They derived their surname from their office, which gradually became corrupted to Stewart. In 1318 a parliament at Scone had declared the two-year-old Robert as his grandfather's successor, but he was displaced as the heir to the Scottish throne on the birth of Robert's only son, David. Robert II 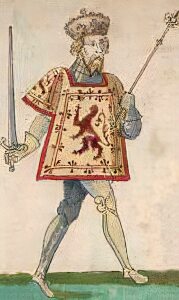 When his younger uncle, David Bruce, ascended the throne in 1329, Robert fought in his support against Edward Balliol, the son of the Bruce's rival, the puppet King, John Balliol Edward Balliol when he invaded Scotland inflicting heavy defeats on the Bruce party on 11 August 1332 at Dupplin Moor and Halidon Hill on 10 July 1333. Robert fought at Halidon and after the battle, Balliol granted his lands in the west to his supporter David Strathbogie, the titular Earl of Atholl. In May 1334 David escaped to France leaving Robert and John Randolph, 3rd Earl of Moray as joint Guardians of Scotland. Robert regained his lands but following Randolph's capture in July 1335, his possessions were once again targeted by the forces of Balliol and King Edward III of England. This may have resulted in Robert's submission to Edward. The Guardianship of Scotland was transferred to Sir Andrew Murray of Bothwell but following his death in 1338 Robert was re-appointed and retained the office until King David returned from France in June 1341. He was later appointed co-regent along with John Randolph, Earl of Moray.

He fought for David II at the Battle of Nevilles Cross, where David was taken prisoner but Robert fled. He was appointed Regent of Scotland for a second time for the duration of King David's English captivity. The event was the cause of friction between Robert and his uncle the King, who angrily responded by accusing him of desertion at Neville's Cross. 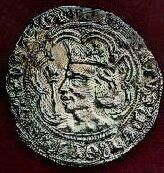 In 1371, when his nephew died childless, Robert finally succeeded to the throne of Scotland at the age of fifty-five. He was crowned at Scone, Perthshire, in March 1371. Reported to have been tall and handsome, in character he was the very antithesis of the famous grandfather whose name he bore. Robert was timid, indecisive and weak-willed.

The new King of Scotland had been twice married. His first wife, Elizabeth Mure of Rowallan, the daughter of Sir Adam Mure, had presented him with ten children. At the time of his accession, he was married to Euphemia, daughter of Hugh, Earl of Ross, by whom he had further issue.

All of Robert's children by his first wife were born out of wedlock. Elizabeth Mure and Robert had finally married in 1347, but because they were within the forbidden degree of consanguinity, a dispensation had to be acquired from the church which further legitimized their offspring.

Controversy existed as to whether any of the couple's many children could legally succeed to the throne. Robert eventually decided that his heir was to be his firstborn son by Elizabeth, John, Earl of Carrick, who was also the High Steward of Scotland. The Earl of Carrick, now heir to the throne, was a sickly man with a pronounced limp.

The unruly Scottish barons held little respect for their new King. Robert was considered an old and weak man and failed to exercise strong control over them.

Robert II deputized the government of the unruly Highlands to his third son, Alexander, Earl of Buchan, known as the Wolf of Badenoch. Alexander ruled with savagery drawing criticism from northern earls and bishops and his half-brother David, Earl of Strathearn. These complaints damaged the king's standing within the Council leading to criticism of his ability to curb Buchan's activities.

As Robert II grew increasingly infirm, his second surviving son Robert, Earl of Fife, was appointed guardian of the kingdom. After an ineffectual reign of nineteen years, Robert died at Dundonald Castle on 19th April, 1390. He was seventy-four at his death, a remarkable age for the time. He was succeeded by his son Robert III.

The Children of Robert II

King Robert II had more children than any other King of Scotland, in all 15 by his two marriages.

The King's first wife, Elizabeth Mure of Rowallan, daughter of Sir Adam Mure, had formerly been his mistress. He married her in 1336, but this marriage was said to be uncanonical. Robert and Elizabeth were re-married in 1349 and all of their 10 children were legitimated at this date:-

By his second wife, Euphemia of Ross, daughter of Hugh, Earl of Ross, the King had a further 5 children:-