The Stewart clan claims its traditional descent from Banquo, Thane of Lochaber, who features in Shakespeare's play, Macbeth. However, the Stewart family who became kings of Scotland historically descended from a family who for at least four generations were seneschals of Dol near Mont-Saint-Michel in Brittany, France. A plaque in Dol today commemorates that origin. 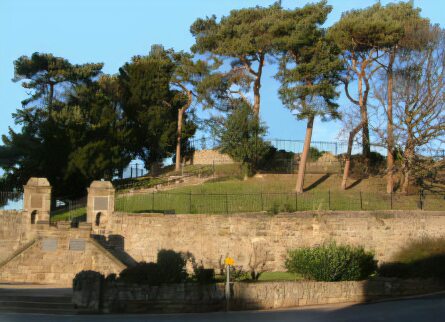 The stewards of Dol were in turn reputed to have been descended from Froamidus, Count of Brittany, who lived in the middle of the eighth century.

The Stewarts first came to Britain after the Norman conquest, when they were invited to England by King Henry I, son of William the Conqueror. King Henry granted them estates in England in Shropshire and Norfolk. Alan Fitz Flaad (1070- 1114) a Breton knight, a witness in 1086 to a charter relating to Mezuoit, a cell of St. Florent, near Dol, held the barony and castle of Oswestry in Shropshire. Alan was a generous benefactor of the church both in England and Brittany, he died at Monmouth in 1114.

Alan was the son of Flaad, who consented to a grant of land by his elder brother Alan to the Abbey of St. Florent before 1080. Flaad was in turn a son of Alain, a crusader who perished (circa 1097) in Jerusalem.

(2)Walter fitz Alan, ancestor of the Stewart Kings of Scotland.

(3) Jordan fitz Alan, of Burton, who inherited lands in Brittany.

Alan's eldest son, William FitzAlan, Lord of Oswestry, was made High Sheriff of Shropshire by King Stephen of England in 1137, he married a niece of Robert, 1st Earl of Gloucester and through his eldest son William Fitz Alan, became the ancestor of the FitzAlan Earls of Arundel. Wiliam supported King David I of Scotland in asserting the rights of his niece Empress Matilda to succeed to the English throne and was a benefactor of the order of Knights Templar. His younger brother Jordan FitzAlan described as 'a valiant and illustrious man', inherited the family estates in Brittany and the office of sensescal of Dol.

The first member of the family to settle in Scotland was Walter Flaad or Walter Fitz Alan, the second son of Alan Fitz Flaad, who arrived in the country when King David I acquired the Scottish throne, the Anglo-Norman feudal system and culture became more established in Scotland during David's reign. Walter was appointed High Steward of Scotland and was granted large estates in Renfrewshire and East Lothian in the Lowlands of Scotland. The office of steward was later confirmed to his family by King Malcolm IV in 1157. The surname Stewart is derived from the family's office as Stewards.

Walter FitzAlan founded Paisley Abbey in 1163 when he issued a charter for a priory to be built upon the site, it was raised to the status of abbey in 1245. Walter died at Black Hall Manor in Paisley in 1177. 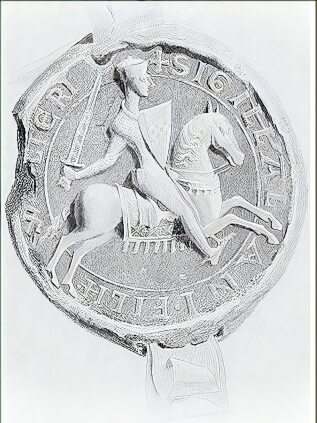 Walter's son,Alan fitz Walter, succeeded his father as High Steward of Scotland, he accompanied Richard the Lionheart on the Third Crusade, David I's advisers had to persuade the King not to leave Scotland to accompany Alan on crusade. Alan FitzWalter returned to Scotland in July 1191. He became a patron of the Knights Templar and was responsible for expanding the influence of the Templars in Scotland.

Alan Fitz Walter married firstly to Eva, generally named as the daughter of Sweyn Thor'sson, although her parentage is disputed. The marriage produced no issue. By his second marriage to Alesta, daughter of Morggán, Earl of Mar and Ada, he had issue:-

Alan's son Walter Steward of Dundonald (circa 1198-1246) was the first of the family to use 'Steward' as a surname. He married Bethóc, the daughter of Gille Críst, Earl of Angus and his wife Marjorie, a daughter of Henry of Scotland, 3rd Earl of Huntingdon. The marriage produced:-

(2) Sir Robert Stewart, of Tarbolten and Crookston, and Lord of Darnley. The direct ancestor in the male line of Mary Queen of Scots second husband, Henry Stuart, Lord Darnley

(3) John Stewart, killed at Damietta in 1249, Egypt during the Seventh Crusade.

Alexander Stewart (1214-1283), also known as Alexander of Dundonald, succeeded as 4th hereditary High Steward of Scotland following his father's death in 1246. Alexander is said to have accompanied Louis IX of France on the Seventh Crusade (1248-1254). After his return to Scotland he served as the principal commander under King Alexander III of Scotland at the Battle of Largs, on 2 October 1263, when the Scots defeated the Norwegians under King Haakon IV.

The arms of Stuart 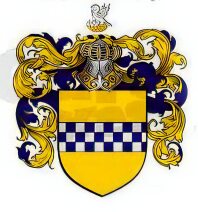 Later the following year, Alexander was rewarded with the lands and barony of Garlies. In 1248 he married Jean MacRory, the daughter of James MacRory, Lord of Bute. They had 5 children :-

Alexander's son James, 5th High Steward of Scotland (died 16 July 1309) was chosen in 1286 as one of the six Guardians of Scotland. He subsequently submitted to King Edward I of England on 9 July 1297, and was one of the auditors for the competitor, Robert Bruce, 5th Lord of Annandale. However, during the Wars of Scottish Independence he joined the patriot Sir William Wallace. Following Wallace's defeat at the Battle of Falkirk in 1298, he switched his support to Robert the Bruce, the grandson of the competitor who was later crowned King Robert I of Scotland.

(4) Sir James Stewart of Durisdeer, Tutor to his nephew, the future King Robert II of Scotland, in 1327.

In 1302, along with six other ambassadors including John Comyn, Earl of Buchan, James was sent to solicit the aid of the French king against the English king Edward I, but was once again compelled to swear fealty to Edward at Lanercost on 23 October 1306. To render his oath secure, it was taken upon the two crosses of Scotland most esteemed for their sanctity, on the consecrated host, the holy gospels, and certain relics of saints. He also agreed to submit to instant ex-communication if he should break his allegiance to Edward. Convinced that his faith was to his country despite all, he once again took up the Scottish patriotic cause and died in the service of The Bruce in 1309. 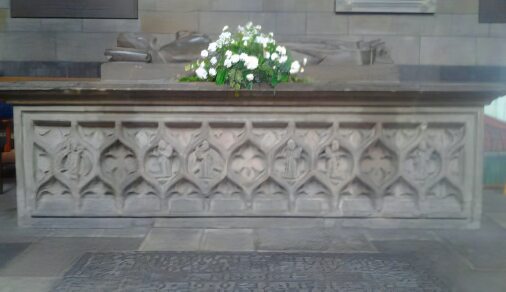 Walter Stewart, the son of James, fought on the side of Robert the Bruce at the great Scottish victory at Bannockburn in 1314, commanding, along with Douglas, the left-wing of the Scots' Army. According to another version of events, he was the nominal leader of one of the four Scottish schiltrons, but because of his youth and inexperience, the effective leader was his cousin James Douglas, Lord of Douglas. This is, however, disputed, as some claim that there were only three Scottish schiltrons at Bannockburn.

Walter was dispatched to the English border to receive Robert the Bruce's wife and daughter Marjorie from their long captivity in England and conducted them back to the Scottish Court. During Robert's campaign in Ireland he and Sir James Douglas managed government affairs and spent much time defending the Scottish Borders.

Following the capture of Berwick-upon-Tweed from the English in 1318, he was given command of the town which, on 24 July 1319 was besieged by King Edward II of England. Several of the siege engines were destroyed by the Scots' garrison and the Steward suddenly rushed in force from the town to drive off the enemy. In 1322, with Douglas and Thomas Randolph, he attempted to surprise the English King at Byland Abbey, near Malton, Yorkshire. Edward, however, escaped, pursued towards York by The Steward and 500 horsemen.

Walter married Marjorie Bruce, the only daughter of Robert the Bruce by his first wife Isabella of Mar, in 1315. The king granted the Lordship of Largs to Walter, forfeited by John Balliol, he was also given the Farme Castle estate in Rutherglen, as well as other lands and the feudal barony of Bathgate, Linlithgowshire. Walter and Marjorie had one son, Robert, delivered by caesarian section, his mother failed to survive the ordeal, dying a few hours later. Following the death of his childless uncle, the Bruce's only son David Bruce, Robert Stewart succeeded to the throne of Scotland as King Robert II.