The future James I was born on 10th December 1394, the second son of Robert III and Annabella Drummond. His elder brother, David Stewart, Duke of Rothesay, the heir to the throne, had died under mysterious circumstances, for which, it was claimed, his ambitious uncle, Robert, Duke of Albany was responsible.

Robert III had attempted to send his younger son to France to guard him against the machinations of his uncle, but he was captured by English ships just off Flamborough Head. On hearing the lamentable news, his depressed father is reported to have died of grief and despair. James thus found himself King of Scotland and the most unwilling guest of his English enemies at the age of twelve. His captor, Henry IV, had him provided with an education at Windsor Castle. 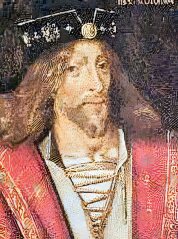 While the young King grew to manhood in English captivity, his ambitious and self-serving uncle, Robert, Duke of Albany, was appointed Regent and Governor of Scotland in his absence and exhibited no haste in securing his nephew's release. During his long imprisonment, James wrote the King's Quair an allegorical romance and major early work of Scottish Literature.

The Regent died at the remarkable age for the time of eighty-three in 1420 and was succeeded as governor of Scotland by his son Murdoch Stewart. Murdoch was not the strong ruler his father was and Scotland slid back into a state of anarchy and lawlessness. After eighteen long years of captivity, James I was finally released by the English. For his return, the English demanded forty thousand pounds. 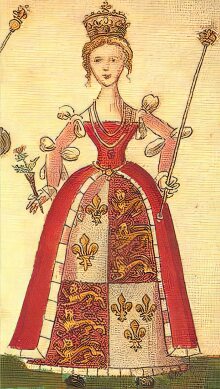 The King returned to his homeland with his English bride, Joan Beaufort, the granddaughter of John of Gaunt, the powerful Duke of Lancaster and great-granddaughter of Edward III. His marriage to Joan, a celebrated beauty, was said to have been a genuine love match rather than the political alliances favoured at the time. They were married in London on 2nd February, 1428.

The new King was crowned at Scone in May 1424. James, unlike his father, possessed a strong and resolute character and was determined to crush the threat posed by the power of the Albany Stewarts and promptly confiscated their estates. Murdoch Stewart and his two sons were executed on Castle Hill, at Stirling.

The King, aged thirty on his return to Scotland, was now a thick-set man, athletic, musical and cultured. Faced the onerous task of restoring law and order to a country rent with dissension, but resolute and determined, James was to prove himself equal to it. King James turned his attention to the Highlands, he summoned the Highland chiefs to a parliament at Inverness. They were all thrown into a dungeon pit and three of them executed, although the rest were eventually released.

A new judicial system was established in Scotland. In 1426 James founded a new court, called the Session, which was responsible for hearing cases which were formerly brought before the King or Parliament. James' concern that all his subjects should receive justice was amply exhibited by his provision of a poor man's advocate to represent those who did not have the means to pay for their own defence, an innovation at the time.

He made Scots coinage exchangeable for foreign currency only within Scottish borders, encouraging trade. He also introduced changes to the Scottish Parliament, bringing it more into line with the English, of which he had experience of in his years of captivity. 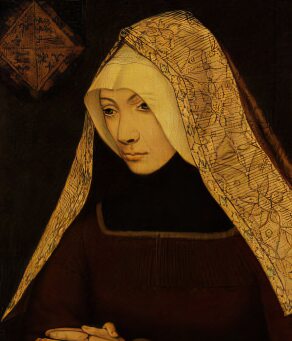 The King's marriage to Joan Beaufort was a stable and happy one, the couple were to produce two sons, the future James II and Alexander, who died in infancy. Margaret, one of James' six daughters was to become the wife of Louis XI of France, re-establishing the 'Auld Alliance' with that country.

James I, engendered much resentment in Scotland by his re-establishment of a strict, but just, system of government. At Christmas 1436, which the King and Queen spent at the Dominican priory at Perth, a conspiracy was hatched to murder King James.

The plot centred around Sir Robert Stewart. The ambitious Earl of Atholl, his co-conspirator, had designs on the throne himself, both were descended from Robert II by his second marriage to Euphemia of Ross, and therefore considered themselves to have a greater right to the crown than James, who descended from Robert's liaison with his then mistress, Elizabeth Mure, whom he only later made his wife.

On the fateful night of 20th February 1437, Sir Robert Stewart dismissed the King's guards and allowed the party of assassins, led by Sir Robert Graham, to enter. The king was preparing for bed, but on hearing the sounds of armed men in the passage outside, he attempted to push the bar through the fastenings that secured the door, but it had been removed by Robert Stewart. Catherine Douglas, a lady-in-waiting to the queen, put her arm through the brackets while the King using a poker from the fireplace, levered up floorboards in an attempt to escape his assailants through a sewer, the assassins burst into the chamber, breaking Catherine's arm in the process. The exit of the sewer had recently been blocked off to prevent tennis balls from getting lost and James found himself trapped.

The assassins searched the chamber and then left to search the other rooms in the palace for their victim. The king, assuming that the silence meant that the danger was over, called out for aid. On hearing the call the assassins returned to the bed-chamber. Two of them went down into the sewer after him. James fought back, taking them by their throats and attempted to wrest the knives from them. Sir Robert Graham joined in the melee and James was finally killed, receiving 16 stab wounds to his body. Queen Joan was also wounded in her frantic attempts to protect her husband, the conspirators then fled.

The conspirators found little support amongst the Scottish people. James was sincerely mourned by his subjects, itself a testament to what he had accomplished. James I is considered one of the greatest of Scotland's Kings. His six-year-old son, James II, succeeded him.

The king's murder resulted in a period of disorder before James II was crowned at Holyrood Abbey on 25 March 1437 in early May the main conspirators were caught. The Earl of Atholl had a red-hot coronet placed on his head before he and his son were beheaded. Robert Stewart was tortured to death. Sir Robert Graham was found hiding above Blair Atholl, still known as Graham's Rock. He was taken through the streets of Edinburgh in a cart, with his right hand nailed to an upright post, and surrounded with men who, with sharp hooks and knives, and red hot irons, kept constantly tearing at and burning his body, until his body was covered with wounds. The following day he was forced to watch his son being disembowelled before suffering the same fate