David Stewart was the oldest son of Robert III of Scotland and Anabella Drummond and was born on 24 October 1378. At the time of his birth, his grandfather, Robert II still occupied the Scottish throne. His father became King of Scotland in November 1384, when his earldom of Carrick passed to David.

In 1398, David was created Duke of Rothesay by his father. In the following year, at the age of 21, due to the infirmity of his father the king, he was appointed "Lieutenant" of Scotland by Parliament, to rule in his father's place. The arrangement had been urged by his mother, Queen Annabella, to ensure her son succeeded his ailing father. His uncle, Robert Stewart, a ruthless politician with designs on the throne himself, had previously been protector of the kingdom. 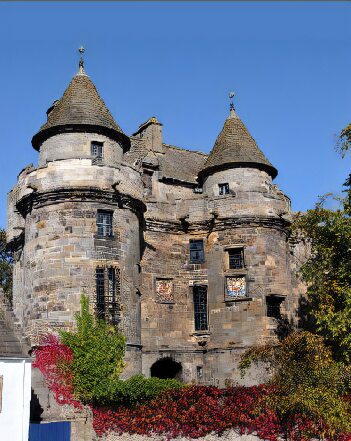 In 1395, David married Elizabeth Dunbar, the daughter of George Dunbar, Earl of March, but the Papal dispensation required because they were close relatives was never obtained, and in 1397 the couple separated.

Following the death of his mother in 1401, David failed to consult his council, as he was required to do, before making a series of decisions that were seen to threaten the positions of his nobles, especially his uncle, Robert Stewart, 1st Duke of Albany.

In February 1402, while travelling to St Andrew's, David was arrested just outside the city by Sir John Ramornie and Sir William Lindsay of Rossie, agents of his uncle Albany, who at that time was in alliance with Archibald, fourth Earl of Douglas. David's father-in-law, the third Earl, had died two years previously, in 1400.

He was initially held prisoner in St Andrews Castle, but soon afterwards was taken to Falkland Palace, Albany's residence in Fife. David spent the journey hooded and mounted backwards on a mule.

David remained a prisoner and shortly after died in the dungeons of Falkland Palace, reputedly of starvation. A few weeks later, in May 1402, a public enquiry into the circumstances of David's death, largely controlled by Albany, exonerated him of all blame concluding that David had died "by divine providence and not otherwise" and commanded that no one should 'murmur against' Albany and Douglas.

Four years later, in 1406, James Stewart, who had been taken prisoner by the English king Henry IV, succeeded Robert III as king, while the Duke of Albany established himself as de facto ruler of Scotland.