Alexander Stewart, the Wolf of Badenoch

Alexander Stewart, Earl of Buchan, known as the Wolf of Badenoch, was the third surviving son of Robert II, King of Scots and Elizabeth Mure of Rowallan, he was legitimated in 1349 after his parents married.

Alexander was created Lord of Badenoch and given large estates in the Highlands of Scotland by his father Robert II on 30 March 1371. In 1382 he was created Earl of Buchan, the first person to hold the title since John Comyn.

Lochindorb Castle, stronghold of Alexander, the wolf of Badenoch 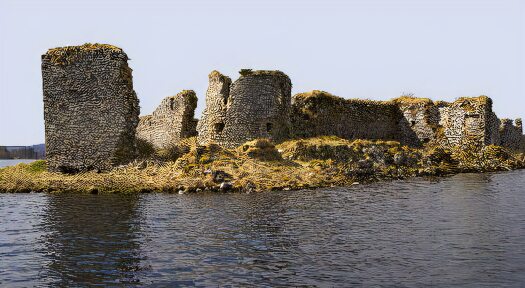 Alexander Stewart was a vicious, bloodthirsty and brutal character, he abused his power and maintained a rule of terror across much of the Highlands by imprisoning and murdering those who offended him. He was said to be huge in stature with a florid complexion and jet black beard, he accompanied his men on missions to rape and pillage within villages in the surrounding countryside, and was merciless in his actions. He was consequently censured by the King's Council in 1388. His chief residence was Lochindorb Castle which is situated on an island in Lochindorb, north of Grantown-on-Spey, but he was also associated with Drumin Castle near Glenlivet and Ruthven Castle near Kingussie.

Alexander married the heiress Euphemia de Ross, Countess of Ross in July 1382. The marriage produced children, for which he blamed on his wife. In 1389 Alexander sought the aid of Alexander Bur, Bishop of Mora. The Bishop, however, supported Euphemia, and Alexander reacted by angrily expelling his wife to make way for his mistress, Mariota Athyn, who had already provided him with several children, the Bishop excommunicated Alexander, the monk who came to Lochindorb castle to inform him of his ex-communication was thrown into the castle's water pit vault.

Tomb of Allexander, the Wolf of Badenoch 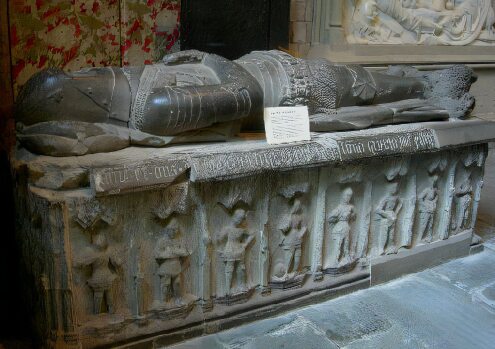 King Robert II died at Dundonald Castle in Ayrshire on 19 April 1390 and his eldest son John, Earl of Carrick was crowned King as Robert III. Bishop Bur obtained the support of Thomas Dunbar, Sheriff of Inverness and son of the Earl of Moray to provide his protection. In May 1390, Alexander rode to Moray with a large force and brutally sacked the town of Forres. He went on to destroy Pluscarden Abbey, from where he continued to Elgin, arriving on 17 June 1390, he burned much of the town and destroyed Elgin Cathedral, as well as the cathedral, the monastery of the Greyfriars, St Giles parish church and the Hospital of Maison Dieu were all engulfed in flames.

Alexander had to appear at the Church of the Friars Preacher, in Perth in the presence of his brothers, King Robert III of Scotland and the Earl of Fife, and the council-general to plead for forgiveness. Robert III ordered his younger brother to do penance for his crimes and make financial reparations, he then pardoned him.

When Sir Malcolm Drummond died in mysterious circumstances, his widow Isobel, Countess of Mar, was given the title, lands, and the castle of Kildrummie in her own right. Alexander and his followers arrived at the castle and kidnapped the countess, forcing her to sign a charter granting him her lands. He was eventually compelled to release her after which she revoked the charter. But when Alexander turned up again at Kildrummie he married Isobel and the charter was confirmed by the king.

In 1392 his wife Euphemia de Ross obtained a divorce and Alexander lost the Earldom of Ross. Three of his sons were imprisoned in Stirling Castle from 1396 to 1402

Alexander Stewart died in 1394 and he was then buried in Dunkeld Cathedral where his tomb, topped by a recumbent figure clad in armour can still be seen.