John, Earl of Carrick, the illegitimate son of Robert II and Elizabeth Mure was born around 1340. He was legitimized in 1349, on the formal marriage of his parents and had been created Earl of Carrick by his great-uncle, David II.

He succeeded his father as King of Scots in 1390. The new King was prevailed upon to change his name to Robert, John was an undesirable name for a King of Scotland due to its unfortunate and unpopular connections with the puppet king John Balliol. 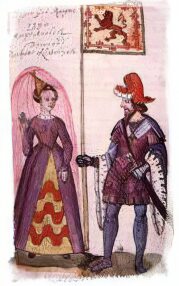 Robert was lame, the result of an injury received in a tournament two years prior to his succeeding to the throne. He was married to Annabella Drummond, the daughter of Sir John Drummond, of Stobhall, near Perth, 11th Thane of Lennox and Chief of Clan Drummond, and Mary Montifex. Her father's sister was Margaret Drummond, the second wife of David II of Scotland.

The new King, like his father before him, was weak willed, hesitant and ineffectual, anything less like his namesake the great Robert he Bruce is difficult to imagine. Anarchy reigned in Scotland during the years of his feeble rule, the country was beset by problems including rivalry between the Highlanders, his brothers and the lords of the isles. 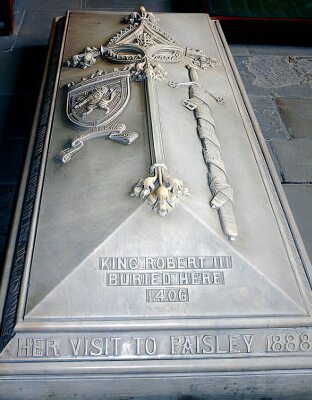 The King's more forceful brother, Robert, Duke of Albany, had been appointed Governor of the realm by their elderly father, towards the end of his reign. The King took over these powers, but owing to the King's 'sickness of body', the council humiliatingly removed them from him and vested them in his eldest son David Stewart, Duke of Rothesay, appointing him as lieutenant of the kingdom. The Duke of Albany proceeded to arrested and imprison David, who died in mysterious circumstances at Falkland Palace in 1402 and his uncle Robert again took up the title. According to rumour rife at the time, David was starved to death. Albany and Douglas fell under suspicion of the murder of David but were cleared of all blame by a general council.

While at Dundonald Castle in Ayrshire and in failing health, Robert attempted to save his second son and heir, the twelve-year-old Prince James, from the ambitions of the powerful Albany, whom he strongly suspected of contrivance in the murder of his elder son. Robert had James hidden at Dirleton Castle and on February 1406, he was dispatched to France. James had to escape to the Bass Rock in the Firth of Forth along with the Earl of Orkney after his escorts were attacked by James Douglas of Balvenie. They remained on the rock for over a month before a ship from Danzig, en route for France picked them up. On 22 March 1406 the ship meant to be carrying James to safety was attacked and taken by English pirates just off Flamborough Head and the heir to Scotland was taken prisoner to the court of Henry IV of England.

The disastrous news was brought to the ageing King Robert Rothesay castle. Distraught and depressed by the event and overcome with his grief and despair he asked to be buried with the epitaph 'Here lies the worst of Kings and the most miserable of men.' He died soon after on 4th April 1406 and was buried at Paisley Abbey. The original tomb was destroyed in 1560 during the Scottish reformation. Queen Victoria later paid for the construction of the present tomb when she visited Paisley Abbey in 1888.

Robert was succeeded by his son James I.