James II, the only surviving son of James I and Joan Beaufort was born on 16th October, 1430 He had an elder twin, Alexander, Duke of Rothesay, who died in infancy. He was otherwise known as James of the Fiery Face due to a large and disfiguring vermillion birthmark that covered half his face.

He suceeded to the throne of Scotland at seven years old following the violent murder of his father. His guardians actively persued the murderers of James I, retribution was swift and they were rounded up and executed. Without a strong hand to control them, the Barons of Scotland returned to their traditional feuding amongst each other. Archibald, Earl of Douglas, was appointed Regent for the child King, when he died in 1439 a savage and bloody struggle for power ensued. 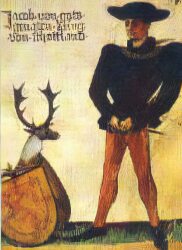 Sir William Crichton, the keeper of Edinburgh Castle had custody of the young James at the time, but Sir Alexander Livingstone kidnapped the King and carried him off to Stirling. Joan Beaufort tried to acquire some protection for herself and her son by marrying James Stewart, known as the Black Knight of Lorne but Livingstone abducted her also. Parliament demanded that he release both the Queen and her son. Livingstone and Crichton then formed an alliance and turned on the Douglases.

William, the young Earl of Douglas, was extremely fond of the young James and a strong bond of affection existed between the pair. Livingstone and Crichton, jealous of his influence, falsely accused Douglas of plotting to take the throne for himself. Hatching a plot to remove him permanently, they invited him and his brother to dine with them and James at Edinburgh. On arrival at what was later termed as 'the Black Dinner' they were treacherously dragged outside and beheaded. The young and sensitive James wept bitterly for his friend but was humiliatingly impotent to prevent his murder.

There followed a period of internecine feuding and chaos. An English army marched into Scotland, Dunbar and Dumfries were burnt and the old feud between the families of Percy and the Douglas flared up. The Douglases, by way of retribution destroyed the Percy seats of Alnwick and Warkworth in Northumberland. The two houses met in battle at Sark, near Gretna, where the Douglases triumphed. William Douglas was undoubtedly the most powerful man in Scotland and the young King began to view this over mighty subject with suspicion and as an abject threat to his own power. 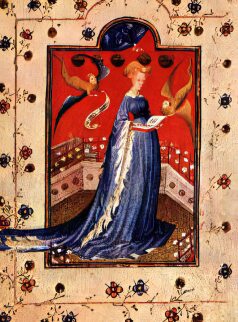 James, a determined and steely character, made prematurely wary by his father's fate and by the adversities of his turbulent childhood, now decided to assert himself. He drove out the Livingstones and executed those who had murdered his Douglas friends. He then attempted to weaken the power of the Earl of Douglas.

A temporary and uneasy reconciliation between the pair was brought about. James, however, clearly continued to fear the overmighty Douglas clan and when it was made clear to him that Douglas was plotting with another noble, Lindsay of Crawford, the King did not waste time in striking out against him. Douglas was invited to Stirling Castle on the King's safe conduct, where he was attacked by the king and stabbed in a frenzied rage at the supper table, officials of James' court joined in the assault, one of whom was said to have cleaved out the Douglas's brain with an axe. The enraged new Earl of Douglas, also James, set Stirling alight in retribution and offered his homage to the English king. This lead to further intermittent civil strife which was ended by the King's final victory over the Douglases at the Battle of Arkinholm in May, 1455.

King James was married to Mary of Guelders on 3rd July, 1449 at Holyrood Abbey, Edinburgh. It was to be a happy marriage which produced seven children, including the future James III.

In 1460, James involved himself in the English dynastic struggle, the Wars of the Roses, placing his weight behind the Lancastrians, his mother, Joan Beaufort's family, and hoping for some personal gain, he attempted to recover Roxburgh, one of the last Scottish Castles held by the English since the Wars of Independence.

On 3rd August, 1460, while in the course of attacking the town, a cannon exploded killing the King of Scots outright. Lindsay of Pitscottie wrote in his history of James' reign "as the King stood near a piece of artillery, his thigh bone was dug in two with a piece of misframed gun that brake in shooting, by which he was stricken to the ground and died hastily."

James was succeeded by his young son, James III and Scotland once again had a minor for its King.

The Ancestry of James II

The family of James II and Mary of Guelders

Issue:- (i) James IV of Scotland