James III, King of Scots, the eldest son of James II and Mary of Guelders, the daughter of Arnold, Duke of Guelders, and Catherine of Cleves. was born around 1451-2 and created Duke of Rothesay at birth. He succeeded his father in 1460 when the latter was killed in an accident involving an exploding cannon. At the age of nine, James was crowned at Kelso Abbey, Roxboroughshire. Scotland again faced a long minority government when it required a strong king to control its turbulent nobles. The Queen mother was appointed Regent and was aided in government by the aged Bishop Kennedy. 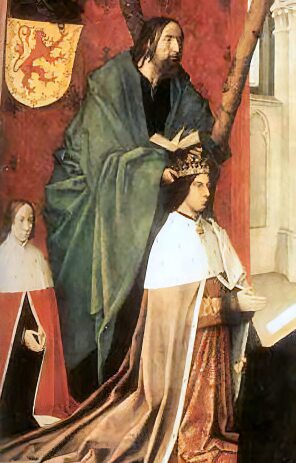 On the death of Bishop Kennedy the familiar story of power hungry magnates vying to control the child monarch was resumed. James was taken captive at Linlithgow and taken by force to Edinburgh Castle by Sir Alexander Boyd, along with the Flemings, Hepburns, Lindsays and others. The powerless young King was made to appear before Parliament and humiliatingly constrained to state that they had acted on his approval. Boyd, an ambitious and unprincipled man bent on self aggrandisement, was then appointed the boy king's guardian and raised his son, Thomas, to the position of Earl of Arran and audaciously married him to the King's sister Mary.

A marriage was negotiated for James in his adolescence, to Margaret of Denmark, a dowry of sixty thousand florins was offered by the Danes. Margaret was the daughter of Christian I of Denmark by Dorothea of Brandenburg.

While both Boyd and Arran were otherwise engaged abroad in collecting the Princess, their enemies grasped their chance to ingratiate themselves with the young and impressionable King and fueled his doubts and fears about his governor. On his return, Boyd found himself totally out of favour and his influence and position usurped. James and Margaret were married at Holyrood Abbey in July 1469. His sister Mary's union with Boyd's son, Arran, was declared void.

Following his marriage, the King, like his father before him, now began to assert himself in the government. James possessed some of his father's instability but none of the determination and strength of character that both his father and his grandfather, James I, had displayed in full measure.

Of a character that was easily influenced by others, James was convinced by those hoping to gain from their downfall that his brothers Alexander, Duke of Albany and John, Earl of Mar, were plotting against him and promptly struck out at them both, imprisoning them in Edinburgh Castle. Mar died of a fever but Albany managed a daring escape. Stronger than his brother, Albany was made more in their father's mould.

James was artistic and sensitive, both admirable qualities, but as had been displayed both before and after him, they were not the qualities that made a successful Medieval King and especially in such an unruly country as Scotland. The common people of Scotland become increasingly annoyed by their King's lack of competence as a ruler, they suffered severely from poor harvests, famine, plague, soaring inflation and a debased coinage which James' government appeared oblivious to, causing ill feeling against the King's inadequacy as a ruler to wax ever stronger.

James' brother Alexander Stewart, Duke of Albany, alarmed at the King's unstable suspicions of him and suffering from what has been described as a second son complex, invaded the country, with an army supplied by the Yorkist King Edward IV. His army was lead by Edward's highly able and ruthlessly efficient brother, Richard, Duke of Gloucester. James discovered too late that his barons had no loyalty to him and were not prepared to support him.

James stubbornly refused to renounce his unpopular favourites, the tempestuous Scottish lords reacted by taking and hanging six of them, including the much-despised Robert Cochrane. James was arrested at Lauder Bridge and carried off to Edinburgh a prisoner, leading to the ironic situation of his brother Albany and his ally Gloucester following hotly in pursuit of the captive King.

On their arrival at Edinburgh Castle, Albany reached an uneasy agreement with the rebel barons that he was to be announced, Regent. Albany's abiding mistrust of the barons was equalled by their mistrust of him, realising his precarious position, he suddenly turned coat and released his brother, restoring him to the throne with much-mooted protestations of "brotherly love and kindness" which evaporated soon after with unseemly haste. James recovered power and Albany fled to his estates in Dunbar, on the death of his strong supporter, Edward IV on 9th April 1483, finding himself in a vulnerable position, he took refuge in England.

Albany returned to Scotland the following year, having acquired the support of the exiled Earl of Douglas and entered Lochmaben. The towns citizens remained loyal to the crown and ousted the rebels. Albany escaped to France, where he died the following year. Douglas was captured but James in a characteristically merciful gesture allowed him his life.

Tomb of James III and his Queen, Mary of Gueldres at Cambuskenneth Abbey 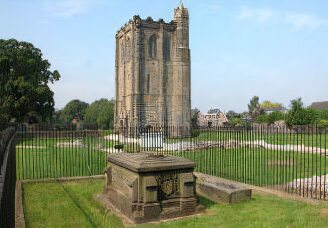 Having learned nothing from the mistakes of the past, the King heedlessly returned to his old favourites and much-preferred music, riding and hunting to the mundane pursuit of governing his country. A minor dispute concerning revenues with the Homes family escalated into open revolt. The King had also managed to alienate and become estranged from his wife, Margaret of Denmark and due to James III's undisguised preference for his younger son, his eldest son, James, also harboured resentments against him.

The king met with the rebels at Blackness, on the Firth of Forth and entered into peace talks with the nobles. After an agreement was reached, James trustingly retired to Edinburgh, disbanding his army. The rebels, however, rose again and the King and his army rode out to meet them on 11th June 1488, at Sauchieburn, proudly bearing before him the sword of his great ancestor, Robert the Bruce. Despite the presence of the Bruce's sword, the battle, unfortunately, went for the rebels and the King was either killed in battle or forced to flee.

Legend has it that James sought shelter in the home of a cottagers wife, whom he asked to bring him a priest. She returned with one and James asked for absolution whereupon 'the priest' treacherously drew a concealed knife from his cassock and slew the King. It is unlikely that the young James was party to this deception and the authenticity of this account of his death has been called into question.

The body of James III was taken to Cambuskenneth Abbey, where it was buried before the high altar of the abbey church, alongside that of his Queen, Margaret of Denmark. His son, James IV was to deeply regret his part in the rebellion which ended in his father's death and ever after wore a chain of expiation around his waist in penance.