The Battle of Largs

Alexander III of Scotland made agressive attempts to recover the Hebridean Islands, known as Innse Gall, and Argyll from the grip of the Norwegians, launching raids against them including a raid on the Isle of Skye in 1262. The Western Isles had for centuries been disputed between the Scots and the Norse.

Plan of the Battle of Largs 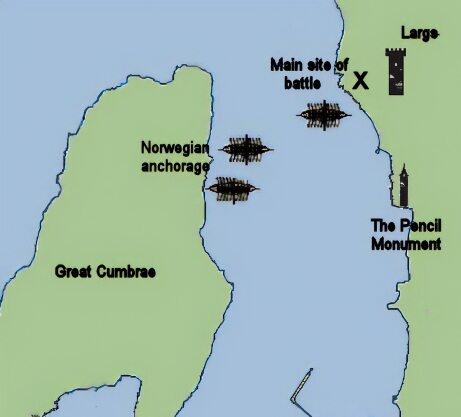 In retaliation to the continued pressure from the Scots, King Haakon IV of Norway mounted a pre-emptive attack to secure Norse control of the area. He gathered a fleet of two hundred ships and in July 1263 set sail for Scotland from Bergen.

Haakon celebrated the Norwegian festival of St. Olaf's Day at Orkney on 29 July, 1263, later sailing on to the Hebridean Islands where he met up with his vassal kings, Dougal of the Hebrides and Magnus III King of Man, all the princes of the house of Somerled also answered Haakon's call to arms, together the allies continued to sail down the coast of Scotland, launching raids on the mainland. Anchoring in Caol Akin (meaning Haco's Strait), Haakon dispatched troops to harass Kintyre and Bute. A further force was sent to attack the island settlements in Loch Lomond.

Negotiations were opened with the Scottish king, by which the wily and resolute Alexander III artfully managed to delay giving battle until October, which gave him the necessary time to raise a Scottish force.

As Alexander had hoped, Autumn gales battered the Norwegian fleet as it lay in the Firth of Clyde. While lying off the Cumbraes, on the night of 1 October 1263, some of the Norse ships were forced to the beach at Largs, on the coast of what is now Ayreshire. The following morning Haakon managed to get onshore to salvage the ships and their cargo, when he was attacked by a Scottish force of heavily armoured cavalry and infantry under the command of Alexander of Dundonald, Steward of Scotland.

Few of the details of the engagement are known, but it appears that the Norse were unable to form up fully in battle array before they were attacked by the Scots.

Site of the Battle

The Norwegians seem to have been divided into two groups. A force of around two hundred was situated on a mound, inland from the beach, and under the command of Ogmund Crow-dance. The other Norwegian force, which included King Haakon were on the beach below. As the Scots attacked, Ogmund is believed to have withdrawn his troops from the mound to prevent being cut off from the main Norwegian force on the beach below.

The arrival of Scottish reinforcements is thought to have turned the tide of the battle. The Norwegians were routed and the fleeing Norse was then pursued, great slaughter ensued, with most fleeing to their boats.

The 'Hakonar saga Hakonarsonar' records that some of the vastly outnumbered Norwegian troops used their beached ships as makeshift fortifications, and although they made a valiant stand were eventually cut down. Haakon's bodyguard managed to get him back to the safety of the fleet.

Following the battle, Hakon sent men ashore to burn the wrecked ships on the beach at Largs. King Haakon then sailed to Orkney where he made plans to avenge himself on Alexander with further military action the following summer, but the fifty-nine-year-old Norwegian king died at the Bishop's Palace at Kirkwall during the winter. His son and successor, King Magnus Lagabøter later entered into negotiations with the Scots which led in 1266 to the Treaty of Perth, when Norway ceded the disputed domains to Scotland, the Inner and Outer Hebrides became part of Scotland through Orkney and Shetland were to continue under Norwegian rule for a further two hundred years.

On 12 July 1912, the Battle of Largs was commemorated with the construction of a stone tower on the shore to the south of Largs, known as "The Pencil", it stands 70 feet (21 metres) tall and was modelled on mediaeval round towers at Abernethy and Brechin.