Alexander III, who acquired the epithet 'the Glorious' was the son of Alexander II by Marie de Coucy and was born on 4th September 1241 at Roxburgh. He came to the throne at the young age of eight and was crowned at Scone on 13 July 1249. Scotland was thus weakened by another minority government. During the years of Alexander's turbulent minority Scotland was governed by rival factions that vied for influence.

Alexander III and Edward I 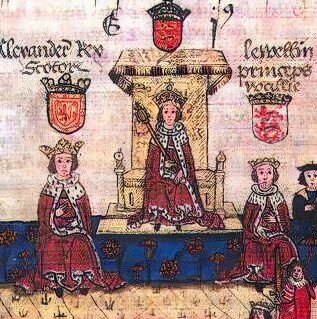 For the first six years of Alexander's reign, Scotland was ruled by Walter Comyn, Earl of Menteith and his brother Alexander, Earl of Buchan who were opposed by Alan Durward, the young king was kidnapped in an attempt to force the regent to share power. 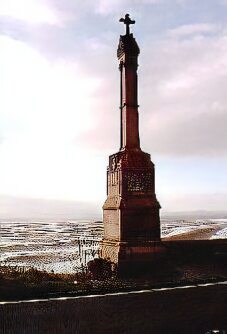 A marriage was negotiated for the young King with Margaret of England, the daughter of Henry III and Eleanor of Provence and he accordingly travelled to York for the marriage which took place in 1251. Henry III, eager to gain the upper hand and reassert England's overlordship of Scotland, asked the boy why he should not pay homage to him, he was reported to have responded that he came in peace, not to answer difficult questions.

Alexander attempted to recover the Hebridean Islands from the grip of the Norwegians, launching raids against them. King Haakon of Norway gathered a fleet in the Summer of 1263 and sailed for Scotland. The wily and resolute Alexander artfully managed to delay giving the battle until October by entering into negotiations with the Norwegian King. As he had planned, Autumn gales battered the Norwegian fleet as it lay in the Firth of Clyde and the Norwegians were defeated at the Battle of Largs. Haakon of Norway died on the return journey to Norway and his successor, Magnus, negotiated a treaty with Alexander ceding control of the Hebrides to Scotland.

The King's daughter Margaret was married to Eric of Norway in 1283, which finally cemented the peace between the two countries. Scottish trade improved and law and order were maintained by Alexander's strong government.

The king's two sons, Alexander and David, his daughter, Margaret and his English first wife all predeceased him. His younger son David of Scotland (born 1273) had died at the age of 8 in 1281, his elder son Alexander married Margaret of Flanders, daughter of Guy of Dampierre, Count of Flanders, on 14 November 1282 at Roxburgh. The couple had no children, Alexander died at Lindores Abbey in 1284 and was buried at Dunfermline Abbey. Having established his only grandchild, Margaret of Norway, as his heiress in 1284, Alexander remarried in November 1285 to Yvette de Dreux, the daughter of Robert IV, Count of Dreux, in the hope of producing a male heir to Scotland's throne.

The king, while in the course of returning from a council meeting at Edinburgh to his new Queen at Kinghorn on 19 March, 1286, was killed when his horse inadvertently stumbled over a cliff in the darkness causing him to fall to his death. The body of the forty-four-year-old king was found lying on the shore the next morning. He was buried at Dunfermline Abbey. A monument today marks the spot where Alexander met his end.

After Alexander's death, Scotland was plunged into a period of darkness that would eventually lead to war with England. He was succeeded by his only grandchild, Margaret, Maid of Norway, the daughter of Eric of Norway and Alexander's only daughter, Margaret of Scotland.