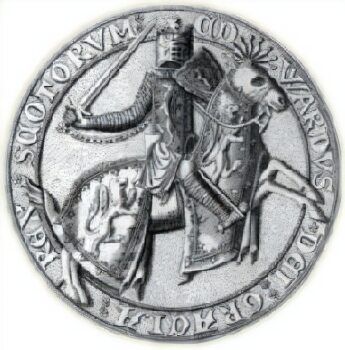 Edward Balliol was born around 1283, the son of the deposed King John of Scotland and Isabella de Warenne, daughter of John de Warenne, 6th Earl of Surrey and his wife Alice de Lusignan, who was the maternal half-sister of King Henry III of England. Edward married Marguerite de Taranto, the daughter of Philip I, Prince of Taranto (d. 1332) they had no issue and the marriage was later annulled.

When his father was forced to abdicate by King Edward I of England in 1296, the younger Balliol was imprisoned with him in England. John Balliol died in exile in France in 1314, Edward Balliol, then in France, was recalled to England by Edward II in 1324.

On the death of the great Robert the Bruce, his four year old son, David II, succeeded to the Scottish throne. The Regency passed to the two men the Bruce had entrusted with the guardianship of his young son, Sir James Douglas and Thomas Randolph. Douglas died shortly after in a skirmish in Spain and Randolph soon followed him to the grave.

Memorial at the site of the Battle of Halidon Hill 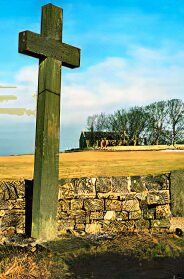 The Regency then passed to Robert's Bruce's nephew, Donald, Earl of Mar. Edward Balliol still harboured dreams that he would one day occupy the Scottish throne, a position he considered to be his by right of birth. He received support from Edward III of England and landing on the coast of Fife he proceeded toward Perth. Mar met them in a bloody battle at Dupplin Moor and was killed in the action.

Edward Balliol was duly crowned Edward, King of Scots at Scone Abbey, but Sir Andrew Murray, appointed Guardian of Scotland by nobles loyal to the memory of Robert the Bruce ambushed him at Annan and drove him back into England. The regency during the minority of the young David Bruce was taken by another Douglas, Archibald, the brother of the previous Earl. Edward III now gave further support to Balliol, he declared the Treaty of Northampton null and void due to border reiving and marched on Berwick.

The Scots met the English invaders at the The Battle of Halidon Hill, where they suffered total defeat. Berwick was forced to surrender after a long siege and Balliol was restored to the Scottish throne. The young King David was promptly sent to France for his greater safety. Balliol paid homage to Edward III for his kingdom, destroying the Scots independence that Robert the Bruce had fought so long for.

Following the English victory at Halidon Hill the town of Berwick and the lands of the Borders and Lothian were ceded to Edward III by Edward Balliol. This ensured that warfare between the two countries would continue as the Scots fought to regain their lands. The young King David was sent to France for safety, where Phillip VI lodged him at Chateau Gaillard.

For twelve years thereafter, anarchy reigned in Scotland. When Edward III declared war on France, Phillip VI sent David Bruce back to Scotland in the hope of creating a diversion. David II entered Edinburgh in triumph, while Balliol fled to England leaving the throne open to his adversary.

After the defeat and capture of David II at the Battle of Neville's Cross on 17 October 1346, Balliol again invaded Scotland, leading an uprising in Galloway, but had no realistic hope of occupying the Scottish throne again. On 20th January, 1356 he surrendered his claim to the Scottish throne to Edward III, in exchange for an English pension. Edward Balliol died in 1367 at Wheatley, Doncaster, Yorkshire.

John I PreviousNext Devorguilla of Galloway