The Treaty of Northampton, signed in 1328, arranged for the marriage of David Bruce, the young son of King Robert the Bruce to King Edward III of England's sister, Joan Plantagenet and Scotland gained political autonomy. Robert the Bruce died soon after, leaving his five year old son to inherit the throne as David II. The Regency passed to the two men the Bruce had entrusted with the guardianship of his young son, Sir James Douglas and Thomas Randolph. Douglas died shortly after in a skirmish in Spain and Randolph soon followed him to the grave. 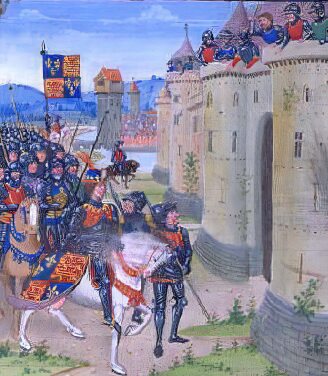 Edward Balliol, eldest son and heir of the former king, John Balliol, continued to claim to the Scottish throne. Siezing the opportunity a minority presented, he acquired English support and along with Henry Beaumont, 4th Earl of Buchan, invaded Scotland. He successfully defeated a Royalist force under Donald, Earl of Mar, Regent to the boy King, who became one of the casualties of the battle, at Dupplin Moor in 1332.

Edward Balliol was crowned King of Scotland by his supporters. But his reign was to prove short-lived, his father John Balliol had been an unpopular king and he acquired but limited support in Scotland.

Balliol was ambushed at Annan in December by a force led by Sir Archibald Douglas, the Earl of Moray, brother of Sir James, the Black Douglas. He managed to escape through a hole in the wall and was forced to flee to England half-dressed. He appealed to the English king for aid, promising to cede the counties of south-east Scotland to the English crown in return. Edward declared the Treaty of Northampton null and void and made ready for war, assembling an army at Newcastle-Upon-Tyne.

Weapons and supplies were gathered for the defence of the vital border town of Berwick upon Tweed by the new Guardian of Scotland, Archibald Douglas. Balliol crossed the border into Roxburghshire with an army on 10 March and marched towards Berwick, placing the town under siege. Four conduits supplying fresh water to the town were destroyed. The then twenty-year-old King Edward III arrived at Berwick around 1 May. By the middle of May, Berwick still held out and Edward sent troops into the surrounding countryside to burn and pillage.

Sir Alexander Seton, who was in charge of the relief of Berwick, which was swiftly running out of supplies of food and water, was granted a short truce, on the condition that he surrendered the town to Edward if not relieved by 11 July. Seton was required to hand over twelve hostages, which included his son, Thomas Seton. Douglas entered England on 11 July, in an attempt to draw the invaders away from Berwick, he destroyed the port of Tweedmouth in sight of the English army, but Edward made no move to defend it. The same afternoon, the date mentioned in the agreement, two hundred Scottish knights crossed the ruins of the Tweed bridge and flung supplies into Berwick, some of them entering the town.

Despite messages sent to Edward calling on him to leave, with the threat that if he did not the Scots army would march south and lay waste to England, Edward still did not move. Douglas, therefore, advanced to Bamburgh, where Edward's queen, Phillipa of Hainault was lodged, Edward however, knew that Bamburgh was a secure bastion and unlikely to fall to the Scots.

As the arranged truce had now expired, Edward ordered the hostages to be hanged before the walls, beginning with the unfortunate Thomas Seton who was hanged before his father's eyes on high gallows Edward had erected close to the walls of Berwick. A further two were to be hanged on each subsequent day for as long as the garrison refused to surrender. Seton, in an attempt to save the lives of the rest of the hostages, arranged a fresh truce, promising to surrender if not relieved by Tuesday 20 July, news of which was carried to Douglas at Bamburgh, who then marched directly to the aid of the beleaguered town.

The English army took up position on Halidon Hill, an ideal defensive site, around two miles to the north-west of Berwick, Douglas approached Halidon Hill on the 19th July, wherefrom the summit of the hill known as Witches Knowe he saw the English army drawn up before him.

The English lined up for battle, the left division was led by Edward Balliol, the centre by Edward III and the right was under the command of Edward's uncle, Thomas Brotherton, Earl of Norfolk.

Douglas was in a poor position, a marshy hollow lay between the two armies, and a downward slope, with precipices, and then a rise lay in front of the Scots before they could reach the enemy position. If he refused to give battle, Berwick would fall by default.

Douglas commanded the left of the Scottish army, which was formed up in schiltrons, King David's nephew, Robert Stewart, (the future King Robert II) led the centre; and John Randolph, 3rd Earl of Moray controlled the right-wing. The Scots waited until after midday to attack, then advanced to the marsh at the foot of the hill, struggling to extricate themselves from the marshy ground, they were met with a hail of arrows, during which many were killed.

The English archers continued to unleash volley after volley of arrows downhill as the Scottish army advanced slowly upwards. Scots Casualties were heavy, Moray's much-depleted schiltron made the first contact with the English, clashing with Balliol on the left. Stewart followed, attacking King Edward's division in the centre. Douglas came in their wake.

Moray's schiltron broke, under repeated arrow fire and retreated hastily downhill. Panic spread from the centre to the left. Those in the rear began running rapidly back to the marsh, however, the Earl of Ross and the Highlanders, fought on to the death.

The fleeing Scots were pursued from the battlefield by English mounted knights who followed them for miles around the surrounding countryside and slew all they found. Robert Stewart and the earls of Moray and Strathern all succeeded in escaping the battlefield, but Douglas the Guardian of Scotland was slain.

The following day Berwick surrendered. Edward then returned south, leaving Baliol to put down any remaining resistance to his rule in Scotland. Following the English victory at Halidon Hill the town of Berwick and the lands of the Borders and Lothian were ceded to Edward III by Edward Balliol.