The Battle of Loudon Hill

Having lost the Battle of Methven to an English force under Aymer de Valence, Earl of Pembroke, one of King Edward I's best and most trusted soldiers, in 1306, where many of his leading supporters had been captured Robert the Bruce was forced to seek refuge in the remote Scottish Highlands, there, like an injured fox run to ground, he retreated into his lair, a cave where he was famously heartened by watching a persistent spider make six attempts to spin a web along the roof before finally succeeding, which inspired Robert to continue his heroic struggle against English domination. 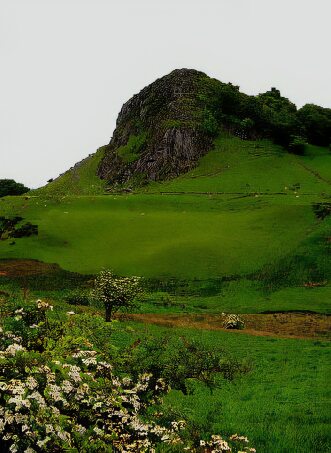 King Robert decided to dispatch his family to the Orkney Islands for their greater safety. Elizabeth de Burgh and other members of his family were captured by the English en-route, and taken prisoner. His twelve year old daughter was imprisoned in the Tower of London and some of the female members of his family, including his sister, Christina, suffered the humiliation of being held suspended in cages in full public view by Edward.

In February 1307 Bruce sailed from the island of Arran to his earldom of Carrick, in Ayrshire, landing near Turnberry, wherewith remarkable tenacity, he soon established himself in the hill country of Carrick and Galloway. An army of Irishmen and Islanders, led by his brothers, Thomas and Alexander Bruce, landed at Galloway was defeated by Dungal MacDouall, a supporter of John Balliol. Bruce's brothers themselves were captured and executed on the orders of Edward I.

Bruce had learned well the sharp lesson delivered at the Battle of Methven, never again would he allow himself to be trapped by a stronger enemy and instead conducted a hit-and-run guerrilla campaign against the English, adopting similar tactics which the great Scots patriot William Wallace had previously employed.

Bruce ambushed an English cavalry force led by John Mowbray at Glen Trool, inflicting heavy losses. He then appeared in the north of Ayrshire in early May, where his army was strengthened by fresh recruits. Here he soon encountered his old foe, Aymer de Valence, commanding the main English force in the area. Bruce took up a position on 10 May at Loudoun Hill, some 10 miles east of Kilmarnock and about 3 miles east of Darvel in Ayrshire.

The only approach the English force could take was over the highway through the bog, where the parallel ditches dug by Bruce's men outwards from the marsh restricted his room for deployment still further, effectively neutralising the English' superior numbers. Valence was forced at attack along a narrowly constricted front upwards towards the waiting enemy spears.

Bruce's tactics prevented the main English force of three thousand men from mounting a frontal attack at full pace. It was a battle reminiscent in some ways of Stirling Bridge, with the same 'filtering' effect. As Bruce's spearmen pressed downhill on the disorganised English knights the rear ranks began to flee in panic. A hundred or more were killed in the battle. Aymer de Valence himself managed to escape and fled to the safety of Bothwell Castle.

Three days after the Battle of Loudoun Hill the Bruce defeated another English army under the command of the Earl of Gloucester.

Two months later, the indomitable Edward I decided to march up to Scotland yet again, to deal with the irksome miscreant Robert the Bruce himself. He died at Burgh-on-Sands, just south of the Scottish border, at the age of sixty-eight on 7 July 1307. Apprehensive of his son Edward's ability to continue his work, he was purported to have asked his flesh to be boiled from his bones, so that they could be carried with the army on every campaign into Scotland. His son instead had his body interred at Westminster Abbey.