Joan Plantagenet, known as Joan of the Tower because she had been born in the Tower of London, was the youngest daughter of King Edward II of England and Isabella 'the She-Wolf of France' and was born on 5 July 1321.

By the terms of the Treaty of Northampton, Joan was married on 17 July 1328 to David Bruce, the only surviving son of Robert the Bruce and Elizabeth de Burgh Their marriage took place at Berwick-upon-Tweed, David Bruce was four years old at the time, while Isabella was seven.

David II, King of Scots and Joan of the Tower 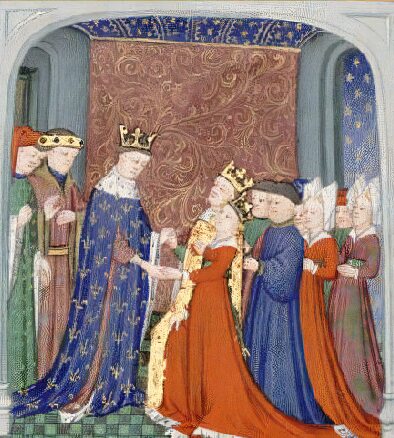 Despite the couple's marriage lasting thirty-four years, it was childless and apparently loveless. On the demise of the great Robert the Bruce in 1329, David, aged four at the time, was duly proclaimed David II, King of Scots and was crowned at Scone Abbey in in November 1331.

Edward Balliol, the son of the exiled King John Balliol siezing the opportunity a minority presented, invaded Scotland with an English army, defeating the Scots at the Battle of Halidon Hill. The young King David and his wife Joan were promptly sent to France for their greater safety. They arrived at Boulogne-sur-Mer in May 1334, where they were received by Joan's cousin, King Philip VI of France, the young couple resided at Château Gaillard at Les Andelys during their stay in France.

David II was eventually reinstated as Scotland's sovereign on the flight of Edward Balliol in 1336. King David was captured at the The Battle of Neville's Cross on 17 October 1346, and remained a prisoner in England for eleven years, Joan's brother King Edward III allowed her to visit her husband in the Tower of London on a few occasions. The Scots continued the struggle, receiving French aid. Enraged, Edward III marched north into Scotland with an army. The crushed Scots finally submitted and agreed to pay a ransom of a hundred thousand pounds for the return of their captive king.

After David's release in 1357, Isabella decided to remain in her native England. She was close to her mother, Isabella of France, the two women became more attached after Joan left her husband. She nursed her mother during her final days at Castle Rising in Norfolk.