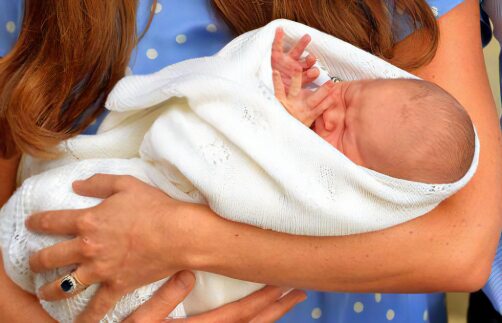 His full name is George Alexander Louis. George was the name that the Queen's father, George VI, reigned by, it is also one of Prince Charles' names. Alexander is the name of three previous Kings of Scotland and is also the male form of the Queen's middle name Alexandra. Louis is one of Prince William's names and was that of Louis Mountbatten, Prince Charles great uncle.

Prince of Cambridge is third in line to the British throne, after Prince Charles and Prince William, displacing Prince Harry in that position and is destined to become the 43rd monarch since William the Conqueror took the throne in 1066. He can be expected to become the head of state of 16 countries, including Britain, Australia and Canada, and possibly the head of the Commonwealth, which covers 54 nations. He will also eventually become Supreme Governor of the Church of England.

Prince William said the couple "could not be happier". Prince Charles issued a statement saying "Both my wife and I are overjoyed at the arrival of my first grandchild, it is an incredibly special moment for William and Catherine and we are so thrilled for them on the birth of their baby boy. He added "Grandparenthood is a unique moment in anyone's life, as countless kind people have told me in recent months, so I am enormously proud and happy to be a grandfather for the first time and we are eagerly looking forward to seeing the baby in the near future." A Buckingham Palace spokesman said, "The Queen and Duke of Edinburgh are delighted at the news." In London, Trafalgar Square was lit blue for a boy, while BT Tower delivered the message: "It's a boy!" The royal birth was later marked with gun salutes and the ringing of Westminster Abbey's bells. After visiting his grandson in hospital, Prince Charles described his grandson as "Marvellous." On leaving the hospital the Duchess of Cambridge stated that it was "a special time for any parent" while Prince William joked that the baby has "got her looks, thankfully", which Kate seemed to disagree with. He also joked that the new prince had more hair than him.

The last time a reigning monarch had a great-grandchild born in direct succession to the crown was nearly 120 years ago. Queen Victoria was still queen when her great-grandchild Edward VIII, who later abdicated, was born third in line in 1894.

Prince George is the Queen's third great-grandchild and was christened in a replica gown worn by Queen Victoria's eldest daughter in 1841. The gown has been used for succeeding generations of royal babies, including the Queen's father King George VI, the Queen, the Prince of Wales, the Duke of Cambridge and Prince Harry. The Earl and Countess of Wessex's son, James, Viscount Severn, became the first royal baby to wear the new robe at his christening in 2008.

The royal couple and their baby son George are expected to spend much of their time in the coming years in a renovated apartment at Kensington Palace, where William and Harry also spent much of their childhood. Royal officials say Kate and William will try to give their child as normal an upbringing as possible. 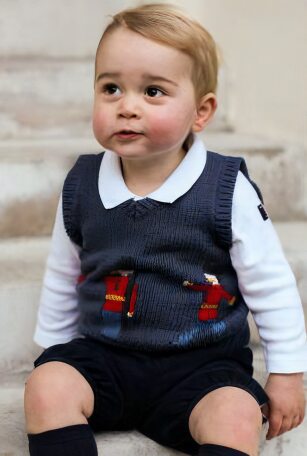 There are many surprises in Prince George's family tree. As well as British kings, they include monarchs of Greece, Denmark, Hungary, Italy, Sweden, Russia, France, Austria, Spain and Germany and include such diverse characters as Charlemagne, King Harold, the last Saxon King of England, as well as William the Conqueror, and El Cid. On the Duchess' side of the family, there is a majority of commoners, Yorkshire wool merchants and Durham miners as well as Arthur Lupton, who taught English to German poet, playwright and scientist Johann Wolfgang von Goethe.

Kate also descends from Elizabeth Plantagenet, an illegitimate daughter of King Edward IV by his mistress, Elizabeth Lucy (also known as Elizabeth Wayte). Kate and William are fourteenth cousins, her great-great-grandmother, Frances Elizabeth Greenhow, was the ten times great-granddaughter of Sir William Gascoigne, a Yorkshire knight who died in 1487. He married Lady Margaret Percy, the fourth and youngest daughter of Henry Percy, Earl of Northumberland. The Earl descended from King Edward III through both his parents. Prince Charles and the late Princess Diana both descend from Sir William Gascoigne and his wife Lady Margaret. 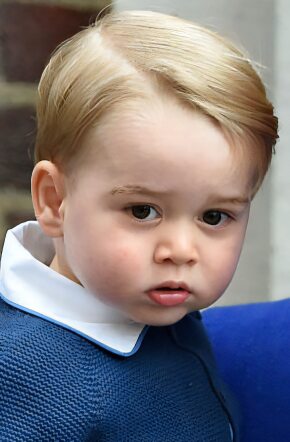 Through his grandmother the late Diana, Princess of Wales, the baby descends from the popular Stuart king Charles II and the Duke of Marlborough, as well as having an Indian genetic link with Eliza Kewark, who was housekeeper to his sixth great grandfather Theodore Forbes (1788-1820), a Scottish merchant who worked for the East India Company in Surat, a port north of Bombay. The royal baby also descends from the Muslim Prophet Mohammed, through Marie de' Medici, Queen of France who was a descendant of Alphonse VI of Castille, who was married to Zaida, a Muslim princess who converted to Catholicism. Zaida claimed ancestry that reportedly went back to the Prophet Mohammed.

Through Queen Mary of Teck, the Queen's grandmother, the line of descent stretches back to the princes of Transylvania and Walachia in Romania to the Princes Dracula, amongst whom was Vlad III Dracul, also known as Vlad the Impaler, who was the inspiration for Bram Stoker's famous vampire.

Prince George's christening, a private, low-key ceremony, took place on 23rd October 2013 at St. James' Palace, London. It was attended by great-grandparents the Queen and the Duke of Edinburgh, the Prince of Wales, the Duchess of Cornwall and Prince Harry, four members of the Middleton family, and the seven godparents and their spouses which made up the 22 guests. The godparents were Oliver Baker, Emilia Jardine-Paterson, the Duke of Westminster's son Hugh Grosvenor, Jamie Lowther-Pinkerton, Julia Samuel, a close friend of Princess Diana, William van Cutsem and Prince William's cousin Zara Tindall. George was christened in a Honiton lace replica of a gown first worn by Queen Victoria's eldest daughter, Princess Royal in 1841. The original gown had in turn been worn by the Queen, Charles, William and Harry, was remade in 2008 after the original became too fragile for use. The Lily font used for the service was brought to the Chapel Royal from the Tower of London where it is normally housed as part of the crown jewels.

The Duchess of Cambridge carried her son out of the chapel after the ceremony, wearing a cream Alexander McQueen outfit and a matching hat by Jane Taylor. The guests then left for tea which was hosted by the Prince of Wales and the Duchess of Cornwall at Clarence House.

George accompanied his parents on a three-week royal tour of New Zealand and Australia in April 2014, during which he carried out his first public engagement on 9 April at a playdate at Government House, Wellington, organised by a New Zealand parenting organisation. In May 2015, he welcomed a sister, Princess Charlotte of Cambridge. George appeared in public when he went to visit his mother and baby sister at St. Mary's Hospital. A younger brother, Prince Louis, was born on 23rd April 2018.

Prince George began his education in January 2016, when he started at the Westacre Montessori School Nursery, near his family home at Anmer Hall in Norfolk. He attended his first day of primary school on 7 September 2017 at the private Thomas's School in Battersea.

The Ancestry of Prince George of Cambridge