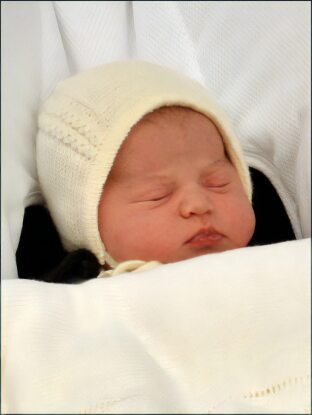 The princess was given the name Charlotte Elizabeth Diana. Charlotte is the feminine form of Charles, her grandfather, the Prince of Wales' name, it is also the second name of the Duchess of Cambridge's sister, Pippa Middleton. The last Princess Charlotte was the daughter of King George IV, Princess Charlotte of Wales, then heir to the throne, who married Prince Leopold of Saxe-Coburg Saalfield and died after childbirth in 1817 at the age of only 21. George III's wife was Queen Charlotte of Mecklenburg Strelitz, a keen botanist who founded Kew Gardens. Elizabeth is after the queen and her mother, Lady Elizabeth Bowes-Lyon, who married King George VI and became the Queen Mother but is also the middle name of both the Duchess of Cambridge and her mother Carole Middleton. Her third name honours Prince William's mother, the much loved Diana, Princess of Wales.

The birth was overseen by a medical team led by Guy Thorpe-Beeston, surgeon-gynaecologist to the royal household, who was assisted by Alan Farthing, surgeon gynaecologist to the Queen. Both of whom were present at the birth of William and Kate's first child, Prince George, in July 2013.

Prince George visited his new sister that afternoon at St. Mary's Hospital with Prince William and although he waved, looked rather bewildered at the massed press photographers. Prince Charles and the Duchess of Cornwall, who had earlier said he was hoping for a grand-daughter, released a statement that they were 'absolutely delighted' while

Earl Spencer, Princess Diana's brother, said 'It's wonderful news, we are all thrilled for all four of them.' Prince Harry, who was is in Australia at the time of the birth, said about his new niece: "She is absolutely beautiful. I can't wait to meet her." Charlotte is the first princess to be born into the British monarchy in 25 years. The last was Prince Andrew's daughter Princess Eugenie in 1990. 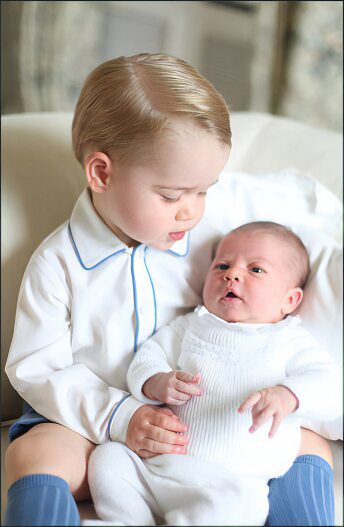 Around 9 hours after the birth of her second child, the Duchess and the new baby left St. Mary's Hospital to return to Kensington Palace, pausing on the steps of the hospital for photographs, where they were greeted by cheers. The Duchess wore a stylish floral printed yellow and white dress by British designer Jenny Packham, while the new princess, who slept throughout, wore a cream knitted bonnet and was warmly swaddled in a white shawl. Prince William carried his daughter to the car in a baby seat, before driving his family home.

London's iconic BT Tower announced the birth in lights while landmarks such as Tower Bridge, the Trafalgar Square fountains and the London Eye were illuminated with pink lights. Among the first visitors to see the new princess at Kensington Palace the following day were the Prince of Wales and Duchess of Cornwall, and Kate's parents, Michael and Carole Middleton.

Princess Charlotte of Cambridge, the Queen's fifth great grandchild, is fourth in line to the British throne, after her grandfather Prince Charles, father Prince William and elder brother Prince George and displaces her uncle Prince Harry to fifth position in the line of succession.

Charlotte holds the title of princess due to a recent ruling by the Queen. The Queen's grandfather, King George V decreed that only the eldest son of the eldest son of the Prince of Wales could be styled Royal Highness. If that protocol had remained, the new baby would have been known as Lady Mountbatten-Windsor. This rule was revoked in 2013, when, prior to the birth of Prince George, the Queen declared that "all the children of the eldest son of the Prince of Wales should have and enjoy the style, title and attribute of royal highness with the titular dignity of Prince or Princess prefixed to their Christian names or with such other titles of honour".

Princess Charlotte was christened at St Mary Magdalene Church on the Queen's Sandringham estate, (where her grandmother, Princess Diana was also baptised) on Sunday, 5th July 2015, when she was just over two months old. The baptism was conducted by the Archbishop of Canterbury the Most Reverend Justin Welby. Charlotte was christened using the ornate silver gilt Lily Font which is usually on display as part of the crown jewels at the Tower of London.

The princess wore a replica of the cream Honiton lace and satin royal christening gown made by Angela Kelly, a dressmaker to the queen. which was also worn by her brother Prince George, the original, made for the christening of Queen Victoria's eldest daughter, Vicky in 1841 and worn used for all royal baptisms until Lady Louise Windsor in 2004, has now been deemed too fragile to use and has now been carefully preserved. Her brother Prince George wore a red and white outfit by designer Rachel Riley which was similar to that worn by Prince William when he first met his younger brother Prince Harry in 1984. The Duchess of Cambridge wore a knee-length cream Alexander McQueen dress coat and Jane Taylor hat. The Duke and Duchess pushed the princess into a vintage Millson pram previously used by the Queen for her two younger children.

The princess had five godparents, Princess Diana's niece, Lady Laura Fellowes, the Duchess' cousin Adam Middleton, Thomas van Straubenzee and James Meade, friends of Prince William's and the duchess's friend Sophie Carter. The small, private service was attended by the Queen and the Duke of Edinburgh, the Prince of Wales, the Duchess of Cornwall, the Duchess parents, Michael and Carole Middleton, and Pippa and James Middleton. Charlotte's uncle, Prince Harry, was absent from the christening as it coincided with a scheduled visit to Africa.

Charlotte began her education at the Willcocks Nursery School, near Kensington Palace, in January 2018. A younger brother, Prince Louis, was born on 23rd April 2018. Due to a recent change in the law, the princess cannot be superseded in her claim to the throne by her younger brother Prince Louis. The Succession to the Crown Act of 2013, rules that male heirs no longer precede their elder sisters in the line of succession. 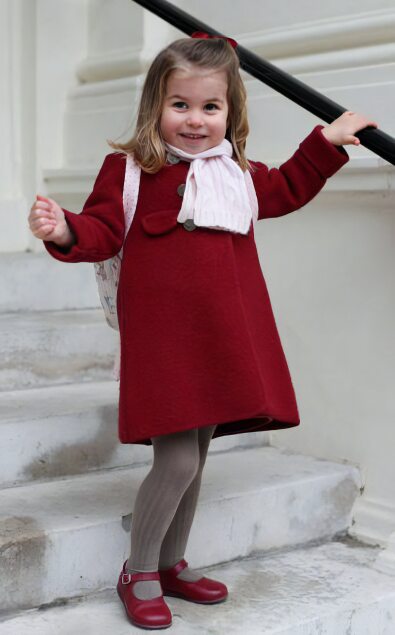 The Ancestry of the Princess of Cambridge