Clarence House stands on the Mall and dates back to between 1825 and 1827. The building was designed by architect John Nash. It was commissioned by King George III's third son, William Duke of Clarence, who succeeded his elder brother George IV in 1830, King William IV reigned until 1387 and was succeeded by his niece as Queen Victoria. After his death, the house passed to his sister Princess Augusta Sophia and after her death in 1840, passed to Queen Victoria's mother, Princess Victoria of Saxe-Coburg-Saalfeld the widow of Prince Edward, Duke of Kent. 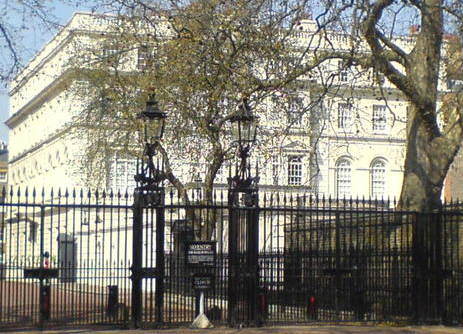 During World War II, the building suffered damage from German bombing during The Blitz. Following her marriage to Prince Philip of Greece and Denmark in 1947, became the residence of Princess Elizabeth. Their second child, Princess Anne, was born there in 1950. The couple enjoyed six years at their London home until after the death of King George VI in 1952, she succeeded to the throne as Queen Elizabeth II, when she moved into Buckingham Palace. Her mother, Queen Elizabeth the Queen Mother, and sister, Princess Margaret moved into Clarence House.

In 2003 following the death of the Queen Mother, Charles, Prince of Wales made Clarence House his London home, Princes William and Harry lived there with him, it is now the London home of Charles and Camilla, Duchess of Cornwall although they also own Highgrove House in Gloucestershire and Birkhall in Scotland as their country homes. Over the generations, the house has undergone many changes to reflect the tastes of its occupants. The building presently is the style of Queen Elizabeth, The Queen Mother and contains many of her painting collection.